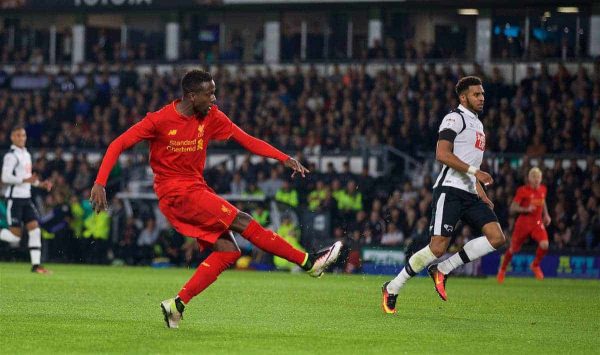 Loris Karius made his competitive debut, replacing Simon Mignolet in goal and there were starts for Divock Origi, Marko Grujic, Ragnar Klavan and Lucas Leiva.

Danny Ings and Emre Can came on as substitutes and Ovie Ejaria made his first-team debut after 77 minutes, much to the delight of the fans.

It was the Liverpool centre-back Klavan who broke the deadlock as the Estonian recorded his first goal for the club, finishing Coutinho’s corner.

The Reds dominated the opening 45 minutes as Nigel Pearson’s side hung on but Liverpool were ruthless in the second half, scoring two more goals to finish the game off.

Coutinho and Origi scored within ten minutes of the half-time break and Derby were unable to impose themselves in the game as the Reds’ dominated for the full 90 minutes.

Here’s all the best reactions from Liverpool fans on social media as the game unfolded at the iPro stadium.

Liverpool fans were excited to see the inclusion of a number of fresh faces as they discussed the starting line-up prior to kick-off.

Looking forward to watching Grujic and Karius – like everyone else is! Hope Origi scores and Ings grabs a goal too.

Ejaria, Can & Ings hopefully get more than 20 mins each. Excited by the youngster in pre season. Ings long awaited return & Can is a talent

Really excited to see how Grujic and Karius will perform. Hope Ings will be coming on too.

There was delight as Klavan opened his Liverpool account.

Our centre-halves scoring with their feet for fun. #LFC

Really pleased that we have goals coming from our defenders in the team now. Reduces the burden on the attackers. #LFC

Within ten minutes of the second half, Origi and Coutinho tripled Liverpool’s lead.

I know it's early days this season, but @LFC haven't attacked this well consistently since we had Suarez… #DCFCvLFC #LFC #liverpoolporn

NorseDweller on the live feed
“Origi special there. Get the scoring confidence in, son! Almost a carbon copy of his smash when we hit Southampton for six in the Capital One cup match at St Mary’s.”

Origi is such a natural finisher! Top, top talent! #LFC

Ovie Ejaria‘s debut was a promising sight for Liverpool fans.

Ejaria is absolutely class, had a boss preseason. Made up he's having his chance.

Biggest cheer of the night is for Ejaria coming on. Good lad, big moment for him. #LFC

And it was a proud moment for U23s boss, Michael Beale.

Here’s all the best reaction to the victory following the final whistle;

This is the sort of banana skin game that we would've struggled in under Rodgers. No such thing under Jürgen ?? #LFC

A good, professional job away from home. Onto the next round. #LFC

Good win and performance overall with several players getting much needed playing time. Next round here we come! (unlike Ev)

Good performance that. No real danger barring the Karius misplaced pass and Hendo giving the ball away. Professional! ?

An emphatic start to the season by Jurgen Klopp's #LFC ,already averaging almost 3 goals a game, netting 19 in 7! @LFC