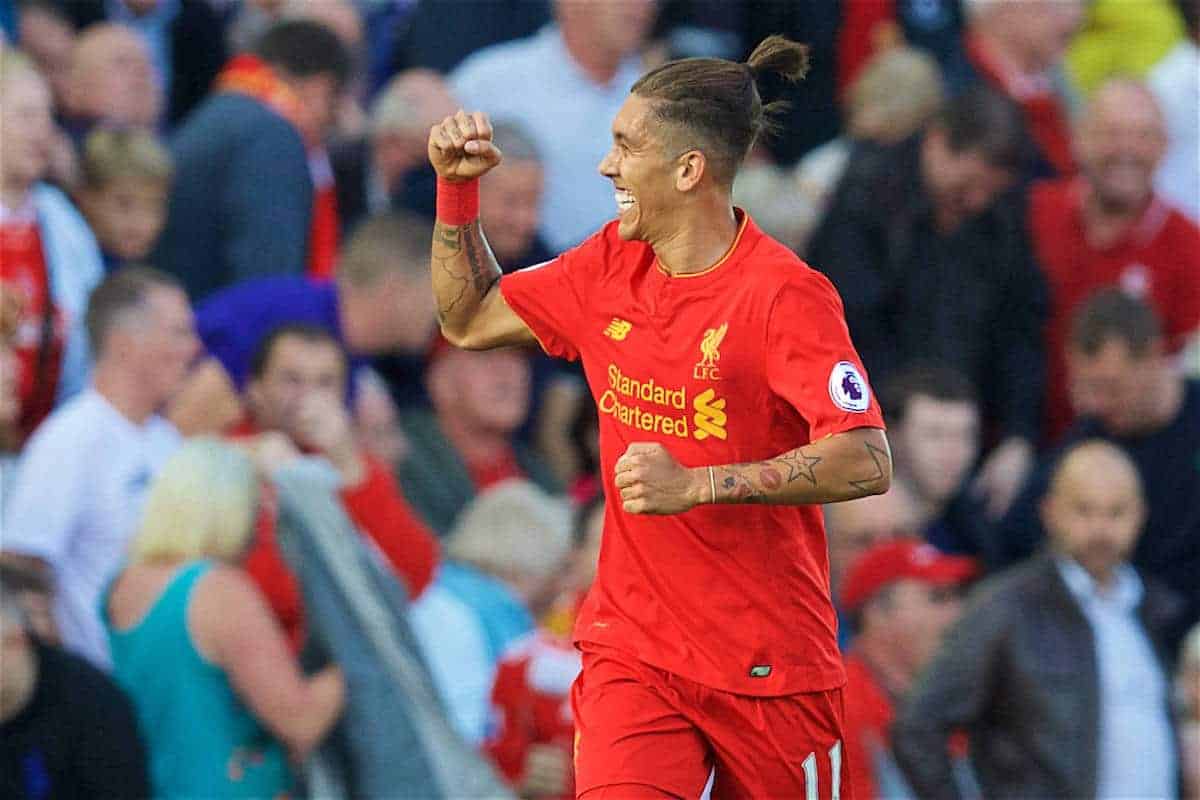 On a day full of impressive individual performances in Liverpool’s 4-1 win over Leicester City, Roberto Firmino produced a display of unrivalled brilliance.

The champions were swatted aside with ease at a breathtaking new-look Anfield, as Jurgen Klopp‘s side once again showed what they are capable of this season.

Had it not been for Lucas Leiva‘s horrendous first-half error, gifting Jamie Vardy and the Foxes a way back into the game, things would have been even more comfortable.

There were eye-catching performances all over the pitch from Reds players.

Joel Matip was a rock at the back on his home debut; Jordan Henderson was dominant and creative in midfield; Sadio Mane and Adam Lallana wreaked havoc and both found the net; Daniel Sturridge was a constant menace up front.

It was Firmino who really stood out, however, with the Brazilian showcasing his all-round magic on a memorable late summer day on Merseyside. From the off on Saturday, Firmino had the bit between his teeth.

Everything the 24-year-old did oozed purpose and class, and while certain players of his ilk can be lazy and lack team ethic, his off-ball work was as outstanding as ever.

His constant hounding of Leicester set the tempo for an electrifying team display, along with a number of his relentless team-mates—no Reds player presses the ball as effectively as Firmino.

Liverpool actually made a rather slow start to the game, perhaps nervous after so long away from Anfield, and with expectations high.

It was Firmino’s beautifully taken opening goal that completely changed the complexion of the match, though, and it outlined his magic to perfection.

The touch he took upon receiving James Milner‘s threaded pass was superb, shifting the ball onto his favoured right foot, giving him enough space to get away from Wes Morgan and Robert Huth and finish nervelessly.

Much like Kevin De Bruyne—a player with equally reliable end product—in the Manchester derby a few hours earlier, there was a coolness displayed that too many Reds players lack in front of goal.

Even Firmino’s second goal of the game, which saw him roll the ball into an empty net, was made to look easier than it was. At times, it appears as though he is playing in slow motion, while others around him sprint manically.

He played a part in Mane’s strike, laying off a nicely weighted first-time ball for Henderson, and a typically subtle pass almost led to Sturridge scoring seconds before Lallana made it 3-1.

Had Henderson not skied horribly into the Kop in the second half, Firmino would have picked up an assist on the day, too.

The Brazilian can sometimes blow a little hot and cold during a game, but it really was hard to fault a single thing he did against Leicester.

His movement was intelligent, there were some outrageous pieces of individual skill and his passing was crisp and thoughtful.

One piece of effortless control during the first half, in which he killed a high ball stone dead, earned an audible gasp from the Anfield crowd.

Deceptively quick and taller than many assume—he is almost 6’—Firmino possesses a physical presence that can be underrated because of his languid style.

There was an argument to say that this was the former Hoffenheim man’s best display in a Liverpool shirt to date, and he is only going to get better from this point on. It looks as though Firmino’s career is going on exactly the same trajectory as so many top foreign players when they move to England.

Many struggle to adapt to the pace and general ferocity of the Premier League at first, which immediately leads to the short-termists among us writing them off and calling them a “waste of money.”

He struggled and looked off the pace in a number of matches, and despite some eye-catching moments along the way, he struggled to find consistency.

It is no different to Luis Suarez when he joined Liverpool. Or Philippe Coutinho. Or many other great former Reds.

People forget that they weren’t inspirational talismans from minute one, either.

Having had a year to find his feet, and having enjoyed a full pre-season with no international commitments—how he isn’t being picked for Brazil is a mystery—this feels like it could be a huge year for Firmino.

He has been dazzling so far this season, on the whole, and in his two most recent games, against Tottenham Hotspur and Leicester, he has been Liverpool’s best player.

The silky forward has goals and assists in him at a potentially devastating rate, and while Sturridge, Coutinho and Mane are more noticeable in their brilliance at times, Firmino may well be the Reds’ most talented footballer.

His versatility is an added bonus—he was Man of the Match in a central role at Spurs and on the left against Leicester—and his fitness levels are exceptional.

Firmino is not perfect, by any means, and he can frustrate greatly when he is having an off day, but all things point towards him becoming a superstar at Anfield.

His style of play may not be as easy to warm to as a blood-and-guts player like Suarez, but if he continues to play to his current level, he will be the new darling of the Kop before we know it.

Eleven goals and five assists in 19 league games in 2016 is a very promising return from a player improving all the time—at 24, his best years are still very much ahead of him.

There was so much to love about Saturday’s demolition of the champions, but nothing caught the eye quite like Firmino’s effortless genius.