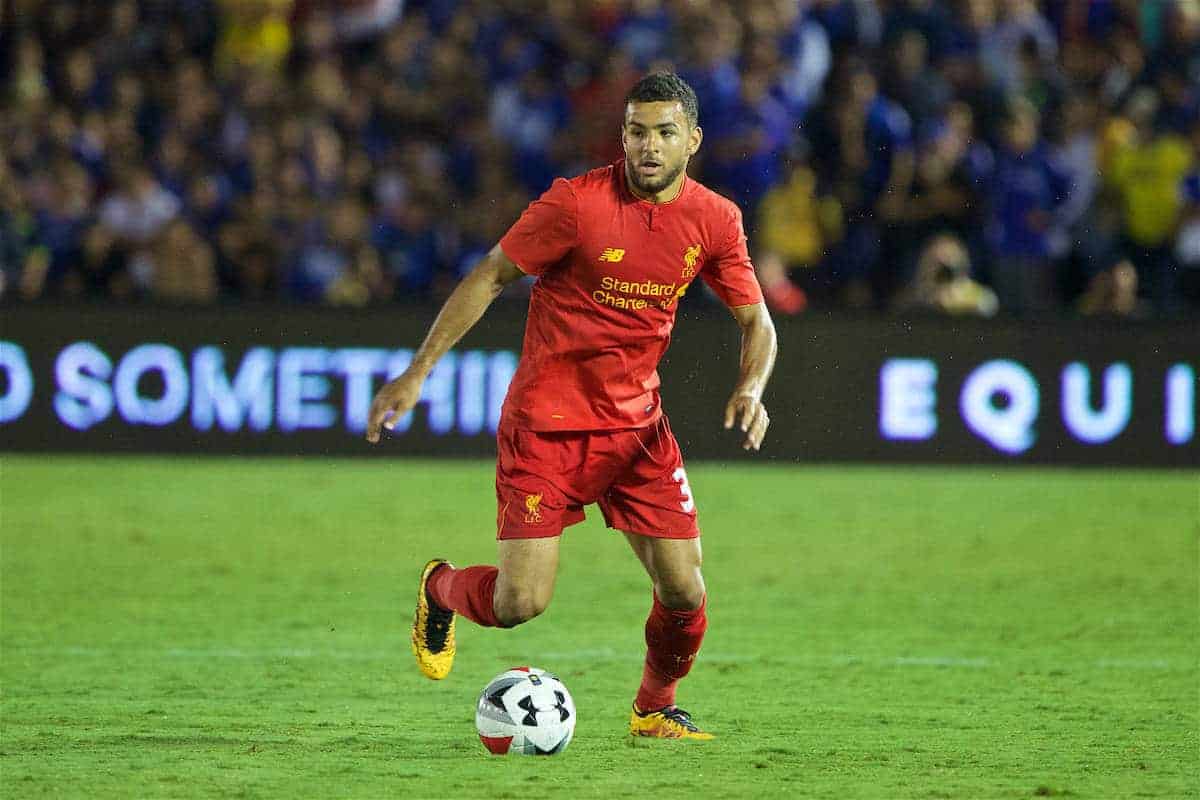 An unlikely success story of the Jurgen Klopp era, Kevin Stewart looks to have ensured his future remains with Liverpool.

Making his first start of the season in Tuesday night’s 2-1 victory over Tottenham in the League Cup round of 16, Stewart provided a reminder of his value within Klopp’s first-team squad.

Lining up against his former side for the second time as a senior professional, Stewart was composed and assured, keeping things simple in his role at the base of the midfield.

Though two-goal Daniel Sturridge rightly claimed Man of the Match at Anfield, Liverpool’s victory was as much about their diligence in other areas, and for this, Stewart deserves acclaim.

He will never be the star, but Stewart is quietly establishing himself as a dependable squad player for Klopp. That Stewart only made his debut at the beginning of the calendar year, starting alongside the likes of Jose Enrique, Joao Carlos Teixeira and Jerome Sinclair in a FA Cup third-round clash with Exeter City, is a testament to his slow and surprising rise through the ranks.

Stewart signed for Liverpool alongside another former Spurs youngster, Lawrence Vigouroux, at the beginning of the 2014/15 campaign.

But already 20 years old, the boyhood Reds supporter looked set to do little more than make up the numbers in the academy, providing competition at full-back, where he’d played most of his youth career.

The Enfield-born youngster had not represented England at any age level, constantly overlooked by the FA.

Months after signing, Stewart trained with Brendan Rodgers’ first team at Melwood, promoted alongside Jordan Williams, but he was soon sent out on loan.

This first saw him join Cheltenham Town, making four appearances for the League Two side, before joining their division rivals Burton Albion, turning out seven times for the Brewers.

By then, Stewart had found his new position in midfield, but prior to that he served as an able utility man, largely utilised at right-back. Stewart’s positional switch was the brainchild of Alex Inglethorpe, Liverpool’s academy director, who managed him at under-18 level while a youth coach at Spurs.

“Part of the rational for Kev coming here was that there was a clearer pathway for him to play in a different position,” he explained in September. “As soon as he came in, we played him in midfield.”

Inglethorpe, who enjoys a close relationship with Klopp, will have had a key influence on Stewart’s promotion to the first team when the German was short on numbers at the turn of the year.

But of the starting lineup that was held to a 2-2 draw by the Grecians back in January, only one player has featured for Klopp’s Reds this season. Stewart has now made 17 appearances for the Liverpool first team, including six Premier League starts and averaging 63.5 minutes per game, but his influence on the Reds’ results has gone largely unnoticed.

Occupying an unforgiving role in Klopp’s midfield, Stewart’s duty is largely defensive, breaking up play and moving the ball on swiftly.

During pre-season, when Stewart played two sumptuous through balls for Divock Origi and Roberto Firmino in August’s 4-0 friendly victory over Barcelona, the midfielder showed more to his game, but when turning out in competitive clashes, this has been reduced.

Against Spurs at Anfield, taking over from the suspended Jordan Henderson, Stewart made five successful tackles and five interceptions, seeing more of the ball (6.8%) than any other Liverpool player, and was not dispossessed once.

The 23-year-old blended into the crowd, allowing his more accomplished midfield colleagues, Georginio Wijnaldum, Ovie Ejaria and Marko Grujic, to instigate attacks, serving as the backbone of Klopp’s 4-4-2 diamond.

In this sense, Stewart is unique within the Liverpool squad, having seemingly supplanted Lucas Leiva as Klopp’s backup defensive midfielder—”he is the best challenger in the squad,” Klopp proclaimed on Tuesday night.

This is likely what endears Stewart to Klopp, with Inglethorpe describing him as “one of the hardest working players I’ve ever worked with.”

He is an unassuming, undemanding character, possessing the humility and drive to endure in Klopp’s system.

Even that day at Wembley Stadium, when Origi finished off a move begun by Stewart hounding Sergio Busquets out of possession and scything apart a centre-back pairing of Javier Mascherano and Jeremy Mathieu, the No. 35 played a minor role in celebrations.

Stewart is an old-fashioned defensive midfielder—no fuss, no frills—and despite Klopp’s Liverpool being built on an all-round game, he seemingly has a place under the German in the long term.

“He is very important. I’ve said it a few times,” Klopp continued after Stewart’s performance in the League Cup round of 16.

While with many managers this could have been a mere motivational tactic, there is a sense that Klopp’s testimony is an honest one, with Stewart adopting a small, but crucial, role in the Premier League this season.

Though he has only played 18 minutes across four appearances in the English top flight in 2016/17, his introduction in the closing stages of victories over Arsenal, Leicester City and Chelsea, and August’s 1-1 draw with Spurs at White Hart Lane, is telling.

Stewart is a player Klopp trusts to see out games when Liverpool are on top, steadying the ship in midfield and adding another body into defensive situations.

Against Spurs, replacing Adam Lallana with a minute to play, Stewart was preferred to Lucas, and with the Brazilian’s contract set to expire at the end of the season, this could represent transition. Having already signed a new long-term contract back in February, Stewart is reportedly in line to agree an extension on his terms, keeping him at the club until at 2021.

This is an emphatic move by Klopp, who is clearly eager to tie down Stewart into his peak years as a midfielder.

Over the next five seasons, Stewart is never likely to establish himself as a regular starter under Klopp, but having carved a niche as a squad player on Merseyside, he looks here to stay.