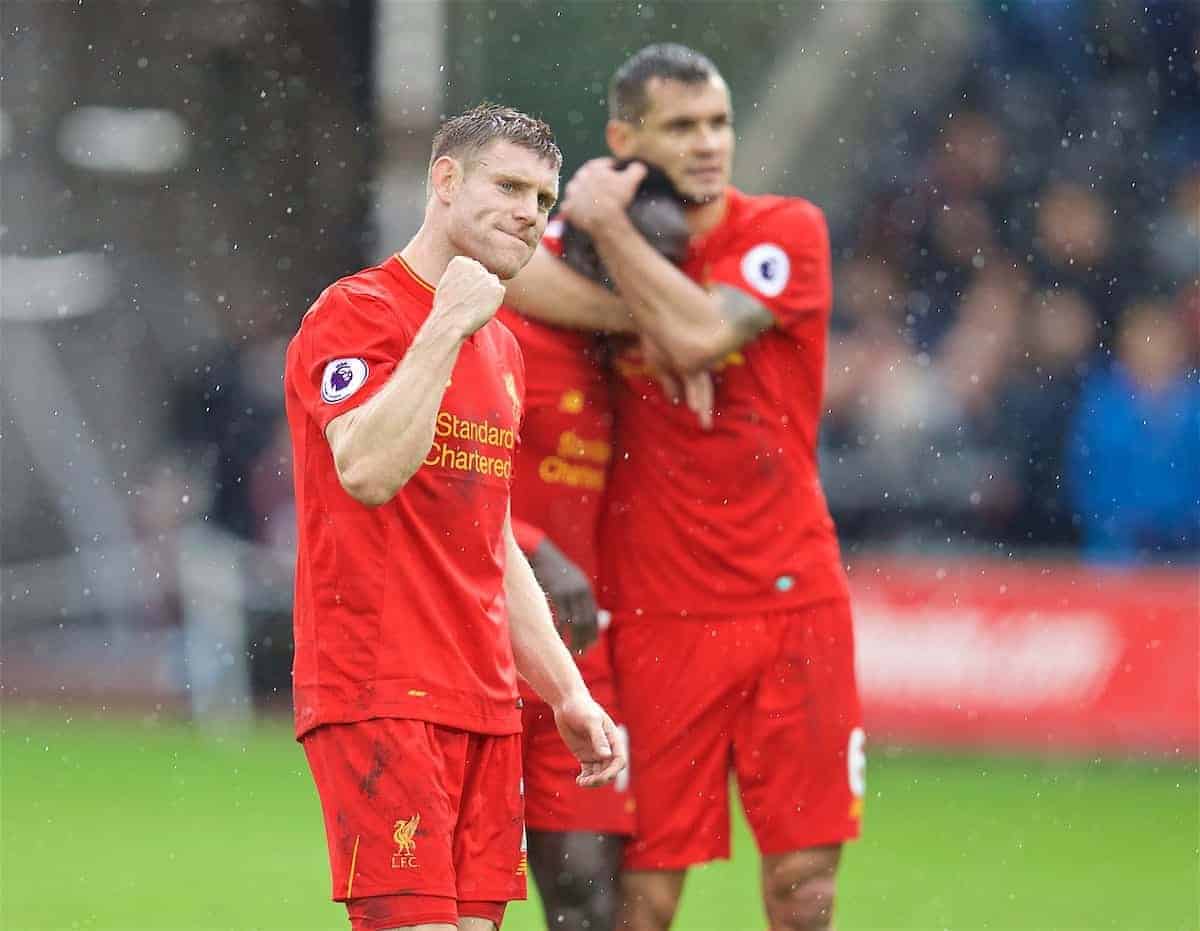 Liverpool’s players were on their way to season-low ratings against Swansea City on Saturday, before a second-half turnaround changed things completely.

With many Liverpool supporters delighted to see Karius retain his place in the side, the German had a difficult afternoon.

He failed to show authority for Leroy Fer’s goal, with another goal conceded off a corner. He also flapped at another in the second half.

Karius’ blushes were also spared in the dying seconds, with yet more poor decision-making almost gifting Mike van der Hoorn an equaliser. If it was Mignolet, we’d have lost the plot.

The positive was that his distribution was very good when under pressure.

A typically solid afternoon in general for Clyne, but like all of his teammates, he grew in stature after the break.

The 25-year-old was poor for Fer’s goal, failing to contest the ball at the back-post, but his energy down the right flank was a great outlet as the match progressed.

The relationship he has built with Sadio Mane is becoming an increasingly potent weapon for Liverpool.

After impressing so much in a Reds shirt so far, this was comfortably Matip’s shakiest day at the office to date.

He was too ponderous in possession in the first-half, playing some loose passes, and some poor marking almost allowed Borja Baston to head home.

He was more impressive after the break, though, albeit due to not having much to do.

Lovren looked a little rusty on the ball in the opening stages, following injury, but all in all he was solid.

The Croatian still has a tendency to dive in on occasions, and his rashness is something he still needs to work on eradicating.

Not perfect, by any means, but good enough. Superb against Hull City last weekend, but he had and up and down afternoon at the Liberty Stadium.

He failed to offer an attacking threat in the first-half, and the defensive side of his game was disappointing at times.

Milner rallied in true Milner fashion, however, and he was superb after the break, stroking home a crucial penalty to earn Liverpool all three points.

His winning mentality and know-how is key to this team.

While others around him failed to find top gear at times, Henderson was one of the few who performed well throughout.

The skipper’s quality on the ball once again stood out – his superb cross allowed Roberto Firmino to equalise – and his work-rate and leadership in front of the back-four grew by the minute.

There were times in the opening 45 minutes when a slight lack of guile proved to be an issue, but this was another pleasing performance from Henderson.

Wijnaldum has been praised in recent weeks for going quietly under the radar in Liverpool’s midfield, but against Swansea, he was largely just quiet.

The Dutchman felt too far away from Henderson in the first-half, neglecting some of his defensive duties, and too often he chose to play the safe pass.

He got better as the match went on, in fairness, and his underrated pace and drive helped play a part in the Reds’ second-half resurgence.

Struggled to make an impact before hobbling off with a groin injury with just 20 minutes on the clock.

Considering his superb recent form, Liverpool will hope he is not sidelined for too long. Groin injury it seems and Klopp says he won’t go to international duty.

While others around him toiled, Mane was a constant menace in Swansea’s final third, with his pace, movement and unpredictability almost impossible to defend against.

Every time he got the ball it looked as though some kind of magic would occur, and his work ethic was fantastic all afternoon.

Liverpool’s Man of the Match – what a signing!

For 45 minutes, the Brazilian was disappointing, losing the ball too easily and failing to influence. But he was greatly improved after the interval.

Used more centrally after Adam Lallana‘s injury, Coutinho began to run the show in the middle of the park, and his dribbling ability and eye for a pass came to the fore.

His decision-making was far better as well, with his preference for long-range shooting less evident. Superb turnaround. There is an argument to say that Firmino is now Liverpool’s most important player, and he played a huge role in the eventual victory.

His pressing and general intelligence could not be faulted, although like his compatriot Coutinho, he was frustrating in the first-half.

After the break he was excellent, though, with his glanced header levelling the scores and his winning of the penalty allowing Milner to make himself the hero.

It didn’t always happen for Sturridge, in terms of end product, but he looked a class act and a real danger.

His off-the-ball movement is vastly underrated, and in the dying minutes he did very well a few times to hold the ball and kill the game off.

No time to make an impact, although one burst through on goal at the end was full of typical Can power.

Like Can, he was only on the pitch for a matter of minutes, but his speed helped stretch the Swansea defence. One brain-dead late shot was disappointing, when he should have just run the ball into the corner. These were not the kind of matches Liverpool used to win, and Klopp’s influence is a big reason why the Reds did nick a victory in Wales.

Admittedly, the performance was woeful in the first-half, but he clearly had words with his players at half-time, and they responded magnificently.

Bringing on Sturridge for Lallana was a positive decision – he could easily have introduced Can – and he has brought an invaluable winning mentality to this squad.