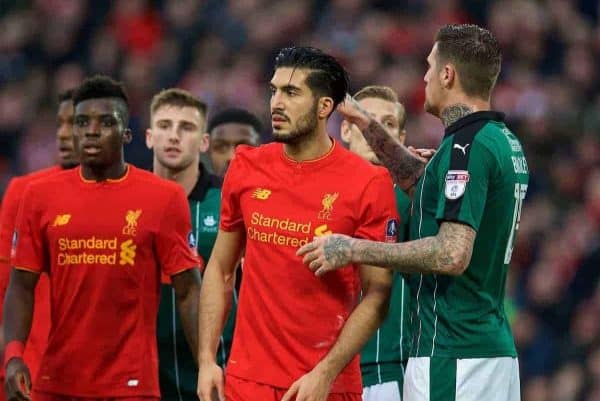 Ahead of Liverpool’s visit League 2 Plymouth on Wednesday, we speak to an Argyle reporter about his experiences at Anfield and what to expect in the replay.

The two sides played out a goalless draw in the original tie at Anfield on January 8th – a result that goes down as one of the greatest in Plymouth’s history.

A young Reds side failed to produce the performance that was required of them, but Jurgen Klopp is expected to go with plenty of youth again on Wednesday, as he rests key players.

The trip to Home Park will be a bigger test of their credentials, and they will be desperate to prove their worth to the manager.

The FA Cup may be Liverpool’s least important competition for the time being, but an exit to lower league opposition would be a mighty blow.

We’ve had a chat with Beren Cross (@BerenCross), Sports Journalist at the Plymouth Herald, to get his thoughts on the Anfield stalemate and what Wednesday’s match has in store.

It wasn’t a good day at the office for Liverpool at Anfield, but what an afternoon for Plymouth! What did you make of their performance?

I found it a tremendously effective performance from the Pilgrims.

It certainly wasn’t the most entertaining brand of football I have seen Argyle play, but it got the job done and now we are in this situation – Liverpool are without a win in 2017 and heading to wet and windy fourth division ground on a Wednesday night with a mixed and matched side, ripe for an upset.

Argyle showed incredible discipline, work ethic and concentration to pull off what they did at Anfield – they deserve this replay.

Some were critical of their defence-minded approach, but Derek Adams’ tactics paid off. Would you liked to have seen a little more ambition shown, given the inexperience of Liverpool’s starting lineup?

In an ideal world it would have been nice to see more ambition from Argyle and for them to try and get the job done on Liverpool’s own patch, but we don’t live in an ideal world.

Given the circumstances, Derek Adams played it beautifully. It was a slightly younger Liverpool side, but everyone in that team oozed quality, class and had more than enough experience to hurt the Pilgrims.

What about the day as a whole? How was a day out at Anfield, both in terms of supporting Plymouth and also working in the media facilities?

As a journalist it was a fantastic day on Merseyside. Unlike last season’s League Two play-off final at Wembley, Liverpool was a free hit for everyone involved with Argyle, so there was no pressure and we were able to relax and enjoy the day at a Premier League ground.

I have never spent a decent amount of time in the city, but in the few hours I had there on the Saturday night I was struck by how warm and welcoming the city’s people were.

This was the same at the stadium too. Every employee I came across was very helpful and generous. The stadium was great, along with the atmosphere, though you have to give most the credit to the away supporters for that.

‘You’ll Never Walk Alone’ is a truly special moment before the matches kick-off there, though. Gave me goosebumps.

How confident are you about a shock in the replay on Wednesday, with Jurgen Klopp likely to play youngsters again?

I would not say I was confident of a shock on Wednesday night, but I wasn’t confident about Argyle keeping a clean-sheet and forcing a draw at Anfield either.

Football is a strange and unpredictable sport. I think we can expect to see Daniel Sturridge and Philippe Coutinho from the start on Wednesday night, based on their game-time in the last two matches.

Klopp does want to advance in this competition and I think he will play a stronger side than first time out.

Tell us a bit about Home Park as a ground, in terms of atmosphere. Will it be intimidating for the Reds?

It’s a largely modern stadium and perhaps not what many of the Liverpool supporters expect when they turn up. Three stands are filled in at the corners and are only the best part of 15-years-old. There is one free-standing stand, which you don’t see on the main television angle, which has been there for decades and shows its age.

It played host to Championship football less than 10 years ago, so it’s not the sort of fourth-division ground you would see at somewhere like Accrington Stanley or Morecambe.

The match will be a sell-out and there are going to be more than 14,000 home supporters. The atmosphere will be superb and I am sure the visiting supporters will play a big part in that.

I think it will be noisy from start to finish, whether Argyle are losing or not.

Finally, what’s your prediction for how the game will play out, and the final score?

Home Park has a large pitch which will suit expansive football and wingers getting to the byline with crosses.

If it follows the same pattern as the Anfield match, surely Argyle will concede sooner or later, especially if they commit more men forward at their own stadium.

I will go with 2-0 Liverpool, but I really would love to see Argyle at least score once. If the quality I expect to be in the Liverpool team does materialise, it could be hard for the Pilgrims to resist it for up to two hours.