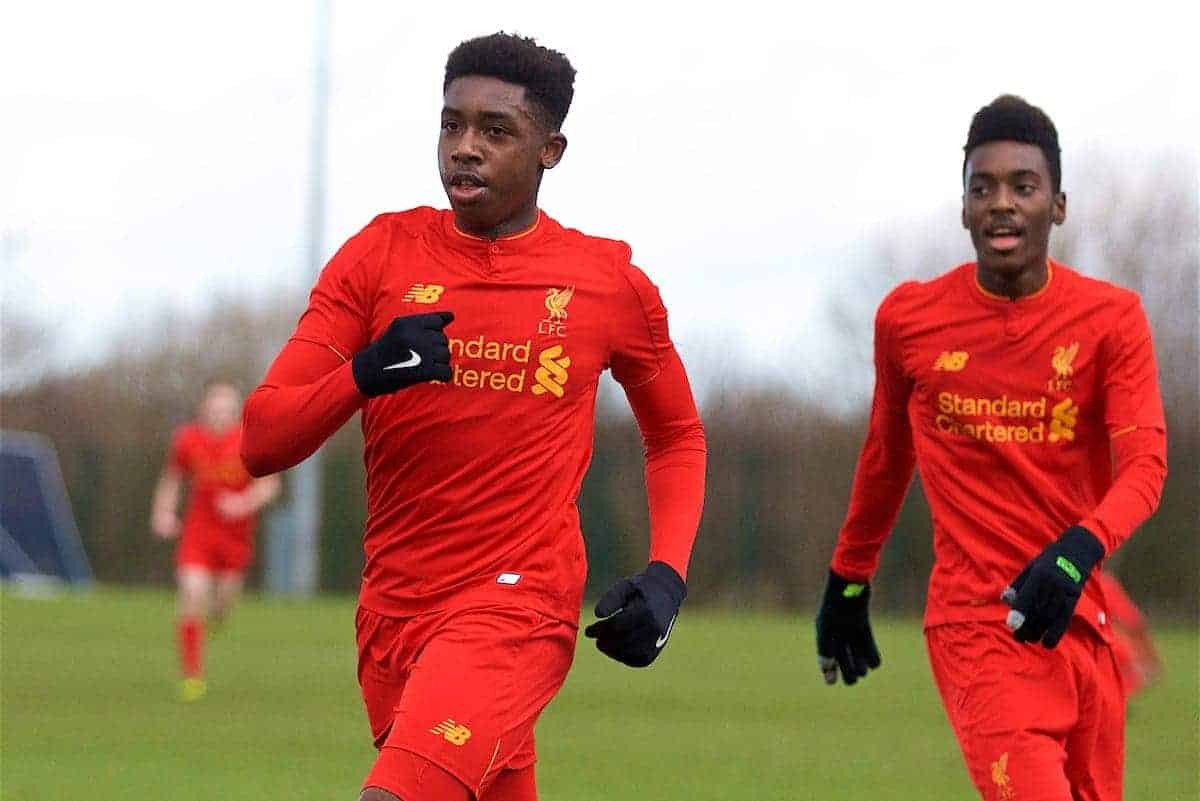 Goals from Okera Simmonds and Yan Dhanda gave the Liverpool U18s a morale-boosting 2-1 victory away rivals Everton on Saturday.

After a month’s break over the festive period, the Liverpool U18s returned to action with an all-important clash away to the Everton U18s in the U18 Premier League.

Neil Critchley fielded a strong starting lineup despite the absence of key midfielder Liam Coyle through suspension, with captain Conor Masterson slotting into the middle of the park, joined by the likes of Dhanda and Rhian Brewster at Finch Farm.

Having suffered a 4-1 defeat in the first mini-derby of the season in September, the Young Reds will have been desperate to secure victory, and after a spirited showing, were able to do so. It took time for either side to find consistency at Finch Farm, with Everton forward Anthony Gordon coming closest in the opening stages, but the teenager scuffed his shot wide of Kamil Grabara‘s post.

Liverpool’s defence was cut open again shortly after, but while Grabara was there to sweep up a dangerous through ball, the linesman’s flag brought the play to an end for offside.

The U18s had their first real chance of the morning following a great ball forward from Mich’el Parker, with Simmonds nailing his first touch on the break, but his cross just eluded the onrushing Brewster.

This prompted a turning of the tide, and it was Simmonds who put his side ahead on the half-hour mark, turning home following a selfless pass from Rafael Camacho.

Simmonds grew in confidence as the half went on, with his driving runs from the right flank and combination play with Camacho and Liam Millar proving a constant threat for the Toffees’ defence, but the U18s couldn’t add another before the break. The second half began in the same vein, with Camacho almost playing in Simmonds for a second following an excellent pass from Dhanda, but Liverpool were unable to find the final ball.

Everton had a great chance on the break with Daniel Bramall making a powerful run down the right flank, but Grabara was again on hand to eventually collect, as Critchley considered a change on the touchline.

After some fine work from Brewster on the left, Dhanda, Camacho and Simmonds all combined in an impressive, free-flowing move, but with five Everton defenders lining up to block Camacho’s resulting shot, the Portuguese couldn’t find the back of the net.

Critchley then sent on 13-goal 16-year-old Glen McAuley, with the forward replacing Simmonds, after the goalscorer picked up a knock in the second half.

Unfortunately it was Everton who scored the second goal of the game, with full-back Adam Lewis conceding a penalty, which Fraser Hornby stepped up to convert after sending Grabara the wrong way.

This sparked the U18s back into life, and with McAuley holding the ball up excellently in the box, Brewster laid it off to Dhanda charging into space, with the midfielder tucking home to make it 2-1, sealing the victory for Critchley’s impressive youngsters.