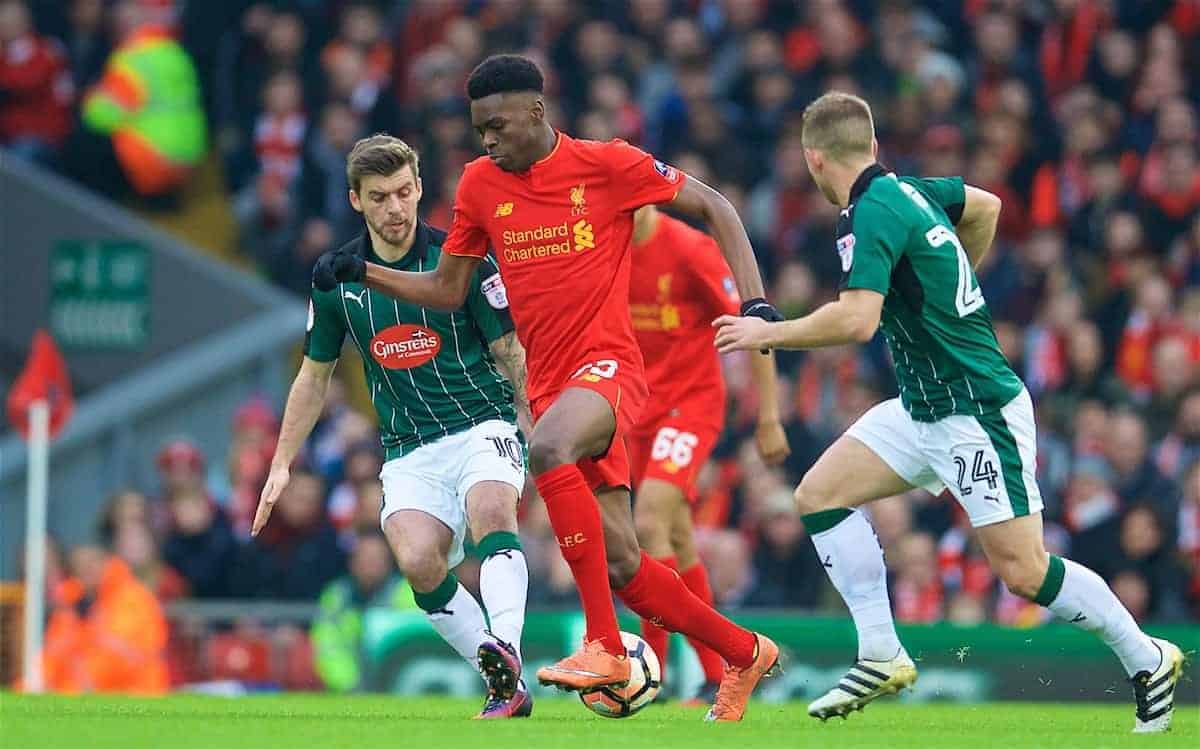 Liverpool’s youngest ever starting lineup were held to a goalless draw in the FA Cup third round by Plymouth at Anfield, where there were numerous underwhelming performances produced.

The German made his first appearance since losing his place to Simon Mignolet, but it was one that won’t earn him his slot back in the team, though that is no fault of his own.

Had literally nothing to do apart from catching two second-half free-kicks, and that he jogged out of goal once to touch the ball five yards to Joe Gomez in the first-half suggested Karius felt he needed to do something to keep himself awake.

Unconfirmed reports that he sat in the Kop for most of the first half.

One of the two home-grown talents in the side, the young right-back was solid if unspectacular on his third first-team start of the season.

Made a bright start to the tie as he instantly looked to get forward, and he carried a big threat running from deep to support attacks as he looked to break in behind Plymouth’s deep-sitting defence.

Final ball, whether a pass or cross, was slightly disappointing throughout however, but on an afternoon he had practically nothing to do defensively, the positive energy and attacking intent he showed made him one of the brighter performers. It was a big day for Gomez, making his first start for 16 months, and he played as well as you would expect from someone who has been out for such a duration of time.

Operating from the right side centre-back role, he showed some typically astute game-reading skills to cover for Alexander-Arnold who moved forward at will, and also showed his typical composed manner in possession, playing the Reds out of a couple of tight spots.

Had little to do defensively, to the point he almost played as a play-making centre-back, but his rustiness was evident a couple of times as he gave away a needless free-kick to put the Reds under pressure, and was beaten one-against-one out wide.

Fantastic to see him back out there however, and he will be delighted to get a full 90 minutes in his legs.

In the team to provide some much-needed experience at centre-back, the Brazilian, who had made more appearances than the rest of the XI combined, turned in a steady display .

Made a good early intervention in the box to deny Plymouth a potential shooting chance, clearing his lines well at the Kop end, but like Gomez, had little to deal with defensively.

Brought the ball into midfield well to join in patient play in high areas as the Reds kept Plymouth pinned back, and forced Argyle stopper Luke McCormick into a smart save in the second period with a good ping from distance.

Put Liverpool in trouble when he needlessly gave the ball away late on however, which thankfully resulted in nothing on what could prove his final Liverpool appearance.

Bombarded up the left at will from early on such was the lack of attacking intent produced by the League Two side, and he provided some nice forward passes and supporting runs outside of Woodburn.

Final delivery was sloppy on numerous occasions however, with the wrong type of cross produced as he floated in some hopeful crosses rather than drilling them in for Origi to slide onto.

Didn’t pose the threat he should have in the second-half when needing to up the ante, and provided precious little from wide-areas overall. Klopp’s go-to man to anchor at the base of midfield in such games, Stewart struggled to enjoy the same level of productive display produced in prior games this season.

Lacked patience as he kept shooting from distance only to see efforts blocked or fly wide, with this willingness to move forward showing how comfortable the game was.

A little basic with this passing at times – when he did try a more adventurous pass he tended to over-hit it – however he kept things simple, ending the first-half with the same number of passes as the visitors altogether.

Better at the more combative aspects of the defensive-midfield role, and made one great tackle to deny Plymouth a rare break-away late on, which was the highlight of an underwhelming display.

The German was the only player from the XI that started the 2-2 draw at Sunderland to keep his place, and there was big responsibility on his shoulders as one of the most senior men involved.

Commanded midfield where he was tidy in possession and constantly probed to find a way past the subborn Argyle back-line, with one nice defence-splitting pass to Alexander-Arnold in particular.

Took increased responsibility after the break to try and force the issue, firing shots from distance and making his presence felt, but ultimately was unable to provide before being withdrawn for Sturridge, and you would perhaps expect slightly more from him in such a game.

The fleet-footed midfielder made his third start of season in cup competition, but it wasn’t his most productive of those outings at Anfield.

Settled extremely well by instantly getting on the ball and moving it around the pitch tidily in deep and advanced areas, showing vision to slide the marauding Alexander-Arnold in behind.

Looked the most purposeful in possession in the first-half orchestrating play in and around the box and demonstrated some great awareness and technical skill in tight positions, but his influence faded in the second period before he was withdrawn.

The young winger came into the side for his first start of the campaign, but it wasn’t the performance he will have hoped for as he looks to show Klopp he can feature in the busy upcoming period.

Showed some nice movement early on to try and break in behind Plymouth’s defence but missed what proved a huge chance, producing a weak glancing header inside the six-yard box when he really should have scored.

Struggled to impose himself on the game overall, despite drifting off the right flank to get involved, and his deliveries into the box lacked quality and precision as he failed to pick anyone out. It was a special day for Liverpool’s youngest ever goal-scorer, who made his full-debut for the Reds as he continues his rapid rise to the first-team stage.

Operating from the left of the front three, Woodburn marked the occasion with a quiet overall display despite making a lively start in which he took the first free-kick of the game, showing his level of self-belief.

Nearly added a second Reds goal to his name after some neat foot-work in the box, only to see his poked effort kept out, and he delivered a good cross to Ojo after the break, who couldn’t head in at the back-post, but that was about all he enjoyed.

The Belgian returned to the starting XI after dropping to the bench at Sunderland, but he failed to take the leading role Klopp will have wanted spearheading Liverpool’s attack.

Struggled to get in the game at all in the first-half as he was denied space and areas to run into by Plymouth’s rear-guard, and that didn’t improve greatly after the break, as he lacked intelligence in his movement and aggression in the box.

Still managed to have the ball in the net in the first period, but saw his composed finished perhaps slightly harshly ruled out, before wasting a well-placed free-kick by drilling into the wall.

Brought on to provide the difference as Klopp grew frustrated with his side’s struggle for a breakthrough, and nearly made an instant impact but his left-foot strike trickled just wide.

Almost managed to get Ojo in on goal with a precise through pass before shooting into the side-netting, immediately increasing Liverpool’s threat, but couldn’t quite grab the desperately needed winner.

Made some penetrative forward runs that had been lacking before his introduction, coming in off the left flank, and stood up one decent cross for Sturridge to attack.

Time was against him as he attempted to provide the moment of inspiration.

Settled straight into the action looking like a man on a mission, and delivered one excellent cross for Origi, which the Belgian should have done better with.

Like Firmino, had limited time to make a difference. Though heavy changes were always going to be forthcoming, Klopp made a brave move in naming the Reds youngest ever starting XI for what could have been a tricky tie – despite insisting pre-match it wasn’t risky.

But he did the right thing naming a lineup of ten alterations, providing much-needed rest to plenty of his first-team picks after a gruelling Christmas ahead of two big upcoming games, and handing valuable minutes to back-up players and key experience to youngsters.

Gave a well-balanced XI the opportunity to get the job done, but when it didn’t happen he turned to his big-guns to make the difference.

However, this perhaps should have happened in one go, with Lallana and Firmino only handed the final 15 minutes to provide the spark alongside Sturridge.

The boss may face criticism for fielding such an inexperienced side, but this XI was ultimately good enough to perform better than it did, as Klopp felt speaking post-match.

Sealing progress to avoid a replay was key, and Klopp will be disappointed that this ultimately hasn’t happened.