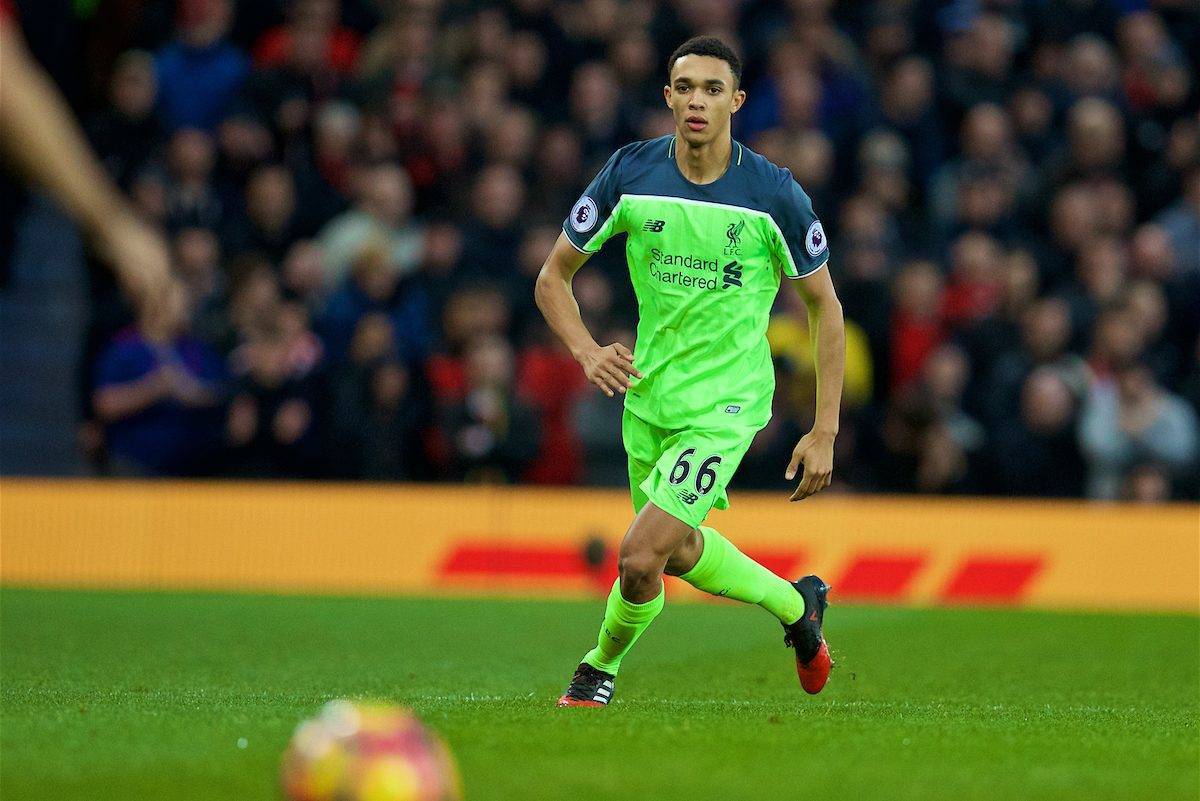 The future is bright for Trent Alexander-Arnold, after the teenager made his full Premier League debut in Liverpool’s 1-1 draw with Manchester United.

While the billing of the Reds’ trip to Old Trafford, following Everton‘s home clash with Manchester City, as ‘Manchester vs. Merseyside’ was questionable, it certainly provided a fitting backdrop to the local talents of the city of Liverpool.

Both 18 years old, both born and raised in West Derby and both turning out for their boyhood clubs, the young duo proved there are great things to come on Merseyside.

For Davies, making his 10th appearance for the Everton first team, this was merely another step in the right direction; but for Alexander-Arnold, it was a monumental occasion—his Premier League debut, against United.

And with the weight of history, and the expectancy of any rival clash, behind him, Alexander-Arnold quietly impressed, providing another solution for Klopp as he plans for the long term at Liverpool. With Nathaniel Clyne ruled out of contention on the morning of Sunday’s all-important fixture with a rib injury, Klopp admitted post-match that he thought about putting James Milner at right-back and Alberto Moreno at left-back, but decided not to change two positions and instead put his confidence in Alexander-Arnold.

The teenager had already featured for the Liverpool first team, though in significantly more humble circumstances: he had already made four appearances, including two starts in the League Cup and one in the FA Cup, and had already impressed.

He had contributed to clean sheets against both Leeds United and Plymouth Argyle, and had also showcased his ability at the other end of the field against the former, notching an assist.

Making his full league debut away to Man United draws parallels former right-back Rob Jones, who himself debuted against United back in 1991.

Jones kept a 17-year-old Ryan Giggs quiet that day at Old Trafford, and went on to forge an excellent career for the club before injury struck, with his accomplishments laying down the gauntlet for Alexander-Arnold.

“I have no worries about Trent Alexander-Arnold,” Jones said ahead of the game, “he is a fearless Scouser [who] will thrive today.”

On a similar day in front of a baying Manchester crowd, Alexander-Arnold was tasked with nullifying £36 million worth talent: Anthony Martial, wearing Giggs’ old No. 11 shirt.

So how did Liverpool’s new Scouse hope fare against United’s big-money import from France? Martial is not having the best of seasons by his standards—despite scoring six and assisting three in 20 games before Sunday—but had shone in his last Premier League start against Middlesbrough on New Year’s Eve, and as a pacy, dynamic winger, served up a major challenge.

Klopp’s defence was already shaken by the omission of Joel Matip through the ineptitude of FIFA, leaving Alexander-Arnold alongside Dejan Lovren, Ragnar Klavan and James Milner—boasting a combined 39 years’ experience of senior football between them.

After a troubled start, Alexander-Arnold grew into the game quickly, balancing his duties in both defence and attack well—though his forays into the final third offered in terms of end product.

Forty-two of his 56 touches of the ball came in the Liverpool half, as with the away side not enjoying the dominance they have grown accustomed to this season, he remained largely focussed on the basics. Alexander-Arnold made three tackles, two interceptions and eight clearances, and was the only Liverpool defender to not commit a foul over the course of 90 minutes; though he was dribbled past twice in the first half.

Most impressive, however, was how Alexander-Arnold consolidated Lovren’s questionable positioning throughout, with the Croatian taking a haphazard approach to holding his defensive line, allowing the likes of Martial and Henrikh Mkhitaryan to exploit pockets of space.

This showcased a mature tactical intelligence beyond Alexander-Arnold’s 18 years, and it was telling that Jose Mourinho withdrew Martial on 64 minutes, as United pushed for an equaliser.

It wasn’t the perfect performance from Alexander-Arnold, and didn’t pack the punch of an 18-year-old Jon Flanagan‘s debut against City back in 2011, but he certainly looked the part alongside his senior colleagues.

And though muted, this was a statement from Alexander-Arnold, proof that he’s ready to contend, and he will now be hoping to follow in Jones’ footsteps and make sure he’s here to stay. While Ovie Ejaria and Ben Woodburn have taken the headlines for their performances this season, Alexander-Arnold’s exposure has been more carefully managed by Klopp.

His previous starts came in low-key cup ties, while his first outing in the Premier League came as a last-minute substitute in December’s 3-0 victory away to Middlesbrough; coming on after Ejaria, and, crucially, in a game not on TV.

Inclusion against United was effectively enforced, but having passed this big test impressively, Alexander-Arnold is now capable of performing more regularly; and he may well need to, if Clyne’s injury keeps him out for any longer.

Handing the No. 66 a further advantage over the likes of Connor Randall, is his versatility, and this can aid his future.

Klopp sees him as a right-back at present, telling Sky Sports after the draw that “the right full-back side is in good hands even when Clyney is not available.” Pepijn Lijnders, however, who managed Alexander-Arnold at U16 level, before his promotion to the role of first-team development coach, envisages his future in the role of controlling No. 6.

He would need to fill out his lithe 5’9″ frame to perform the latter at first-team level—with Pedro Chirivella‘s disappointing audition in May’s 3-1 loss away to Swansea City as proof—but for now he can be content with more appearances at right-back.

Jones, who said Alexander-Arnold “definitely passed” his test at Old Trafford, is not the youngster’s only high-profile admirer, with Steven Gerrard, Jamie Carragher and Robbie Fowler all lining up to shower him with praise, while the club rewarded him with a new long-term contract in November.

If he continues his fine progress over the course of that five-year deal, he could be the first Scouser to truly establish himself at the club since Gerrard himself.

His next opportunity will likely come away to Plymouth in Wednesday night’s FA Cup third-round replay, with this trip to Home Park presenting a much different challenge to that of Sunday’s draw.

This should provide Alexander-Arnold with the freedom to express himself more, and serve up further proof his long-term future is in Klopp’s starting lineup.