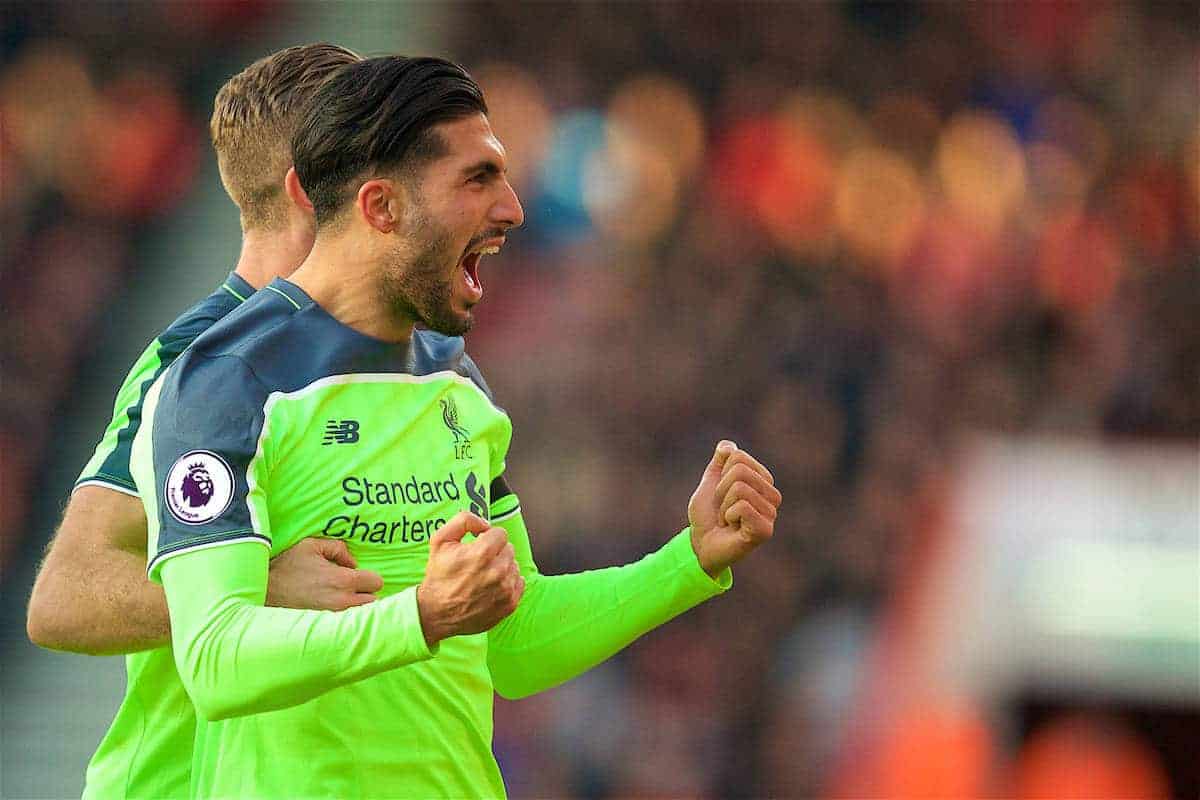 With Emre Can currently at an impasse with Liverpool regarding his new contract, whether he deserves an improved deal is a debatable subject.

Can’s current deal is set to expire at the end of the 2017/18 campaign, leaving the German midfielder with less than 18 months on the books at Anfield.

The Reds have been in talks with the player’s representatives since last year, but are believed to have yet to strike an agreement regarding Can’s wages. More recently he’s been linked with a possible move to Juventus.

Having struggled for form this season so far, Can is in a difficult position in discussing his future, with suggestions that Liverpool could look to sell him if he doesn’t sign a new deal by the summer.

So should the club stick or twist with Can’s contract talks? And should he be moved on if no agreement is made in the coming months?

After growing into a key player last season, it’s been frustrating to see Can fail to build on that promise this campaign. Having only a short pre-season which was followed by injury has unquestionably hindered his progress though, so it’s not entirely his fault.

Despite his struggles, I still see Can as a player of big potential and one Liverpool should most definitely be looking to keep for years to come, so I’m hoping a breakthrough in contract negotiations arrives.

Bowing to player’s demands does set a dangerous precedent, but if we’re happy to go all out (as it seems we are) to tie Adam Lallana‘s future down, then I’d expect the same for Can—even if his importance isn’t as great currently—with the German boasting greater potential and resale value should he not fulfil it as hoped.

Can may not be first choice at this moment—rightly so with the form and results picked up with Lallana, Jordan Henderson and Georginio Wijnaldum as the central unit.

But, still only 23, I see him playing a long-term role and growing again as Klopp’s Reds evolve, so I hope Liverpool meet his demands to keep him at Anfield.

Without knowing exactly what Can or his agent are asking for, it’s hard to say. But the club have perhaps opened a can of worms if recent reports suggesting Lallana is being offered £150k per week are true.

I don’t think Can is worth more than £70-80k per week, but I imagine his advisors will be asking for nearer £100k, which would put him in the squad’s higher earners.

Selling him this summer, despite his poor form this season, would be a tricky one given that we need to be building a stronger, bigger squad ahead of European football next season.

So selling a player Klopp clearly likes working with would seem foolish. Anyone who has played so many games and worked with Klopp over 18 months is in a good place going forward.

But then much depends on Klopp’s vision for where he intends to use Can in future. For me, the box-to-box role is one he isn’t ever going to do ‘enough’ in, so it depends if Klopp wants Henderson as the No. 6 long-term, or indeed if he ever envisages a return to the 4-2-3-1 formation.

So depending on that, I wouldn’t be overly concerned if a new contract couldn’t be worked out and we sold Can for good money (£25 million-plus) this summer. A good quality, more suitable replacement would have to be secured ahead of letting him go though.

I would keep Can for at least another year.

He is still only 23 and has shown what potential he has in the past. Look at how Henderson was being treated at 23, or even Lallana at 26, and realise that it is far too soon to write him off. Being a Germany international with the quality they possess is no mean feat.

He needs to find his top form, though, and start becoming someone you can rely on on a weekly basis. If he fails to do that, I would consider moving him on in 18 months or so.

I have vented my anger towards him on numerous occasions this season, and there can be no arguing that he is now not part of Klopp’s best possible starting XI. It has been a really disappointing 2016/17 from him, with too many performances bordering on infuriating.

Wijnaldum is offering far more than he is in midfield currently, with his intelligence, consistency and discipline all things Can has lacked for the majority of the season.

Hopefully he isn’t needed too much between now and May, but I am equally hopeful that he will knuckle down in the summer and hit top gear again.

Klopp rates him highly, so barring the contract dispute turning ugly, I can’t see him allowing Can to leave.