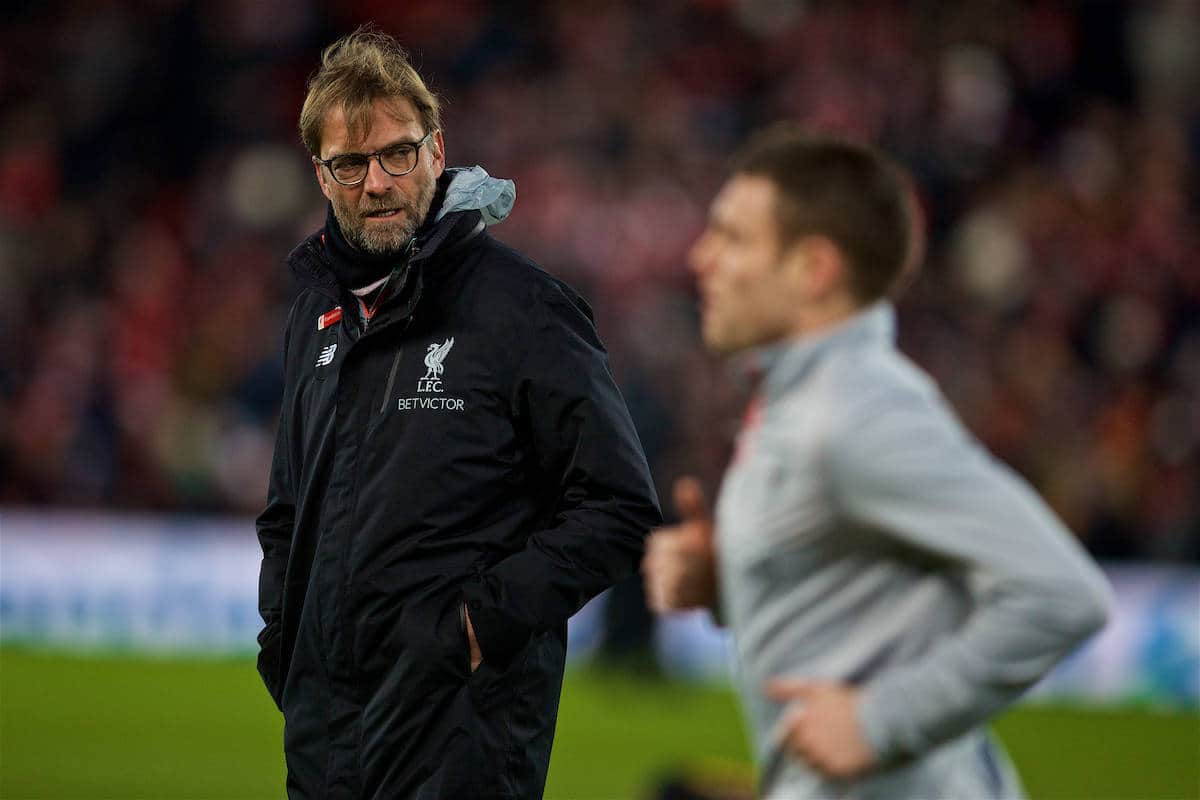 Jurgen Klopp says the biggest lesson he learned during Liverpool’s January slump was how much the winter schedule affected his squad.

The Liverpool boss opted to make just one change, that being enforced, for the game against Sunderland on January 2 – less than 48 hours after the win over Man City at Anfield on New Year’s Eve.

“From 31 December to 2 January you could see the difference physically,” said Klopp this week.

“It was not that we had all the players to change it at Sunderland. It was a few things. On a few things we had an influence and on others we did not have an influence – we conceded goals, offside against us, penalty against us.”

To make, effectively, no changes for the Sunderland game was clearly a mistake – and Liverpool spent the rest of January looking jaded, being out-muscled and out-paced by Wolves, Southampton and Swansea City as their title challenge faded into top-four hopes and they exited two cup competitions.

When asked what he learned most during the run of one win in 10 games, Klopp said: “December-January. Not even Chelsea came through without no problems but they were able to play the same team all the time. They left the EFL Cup when, before it started? [It was the fourth round] I don’t remember them playing one game in that competition. ‘Get rid of this.’

“I spoke to Antonio [Conte] for a long time at Anfield, maybe 25 minutes, and he mentioned it [the fixture schedule] but said they could play the same 13-14 players all the time. That is the big difference.”

While Liverpool did indeed have a busier schedule, and suffer with injuries, Chelsea have barely had any major injuries to any of their first-team this season.

Interestingly, Klopp pointed to Chelsea‘s ability to see out a game and have the winning know-how, something Liverpool demonstrated for the first time in a long time against Tottenham last weekend.

“We are not used to being a top team, maybe we have to be,” said Klopp. “We are not clever like Chelsea who will be 2-0 up and just finish a game.”

Klopp says he has learnt about his players from the month: “They are all human beings and of course they are influenced by the things they see every day.

“Did I learn anything new about them in the last few weeks? Yes. A lot of what I wanted to learn? No. But that is how it is.

“I am not one bit in doubt about the character of these players but of course we have to create mentality. We had a few moments when we didn’t deliver, didn’t perform, although not too often in the Premier League otherwise we couldn’t be where we are now.”