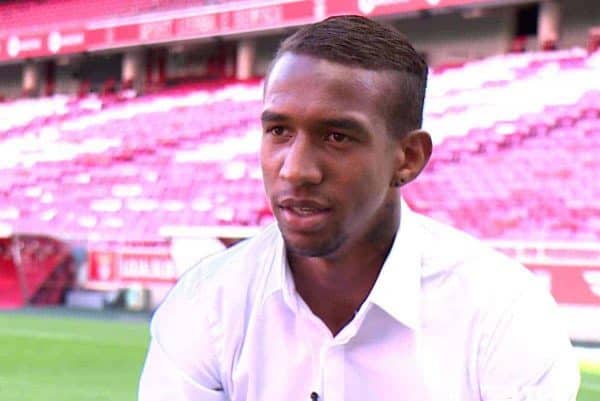 Liverpool are said to have sent scouts to watch Besiktas’ on-loan Benfica forward Talisca, in their recent Europa League clash with Olympiakos.

The two sides played out a 1-1 draw at the Karaiskakis Stadium in their last-16 first leg tie on Thursday, with the 23-year-old replaced in the last minute by Gokhan Inler.

Though Talisca failed to find the back of the net that night in Greece, he has been in great form this season so far, scoring nine goals and assisting a further three in 22 games in all competitions.

This includes one against his parent club in the Champions League group stage back in September, with Benfica suffering from the terms of their agreement.

Talisca is currently in the first season of a two-year loan with Besiktas, but this has not stopped speculation over his future.

According to Turkish-Football, Liverpool were among the clubs in attendance in last week’s draw, in the latest in a number of scouting trips to watch Talisca in action.

Liverpool were previously reported to be close to signing the Brazilian last summer, bizarrely along with Wolves, but issues obtaining a work permit put paid to a move to England.

Whether this would change in the coming transfer window is questionable, as is whether Besiktas would allow him to depart midway through his loan spell.

Talisca typically plays in a central attacking role, but is also capable of playing as an auxiliary forward, and represents an interesting candidate for the role.

Standing at 6’3″, Talisca is a different proposition to the likes of Sadio Mane and Philippe Coutinho but is still capable of driving at defences with pace, power and precision.

He is adept is possession and possesses a strong, long-range strike that could provide Liverpool with another threat on goal in a supporting role.

If the Reds’ interest is genuine, it could be that Jurgen Klopp envisages Talisca operating as a No. 9, similar to Roberto Firmino.

With question marks over the future of Daniel Sturridge, Klopp could seek to add another centre-forward to his ranks ahead of 2017/18, with FC Rostov’s Sardar Azmoun another potential target.

Talisca, who has been on Liverpool’s radar since 2014, when Brendan Rodgers was still in charge, would not come cheap, however.

He is said to have a release clause of around £22 million in his current contract with Benfica.

But the prospect of the burgeoning star linking up with compatriots Coutinho and Firmino could be an attractive one for Klopp, as he looks to add further attacking quality to his squad.