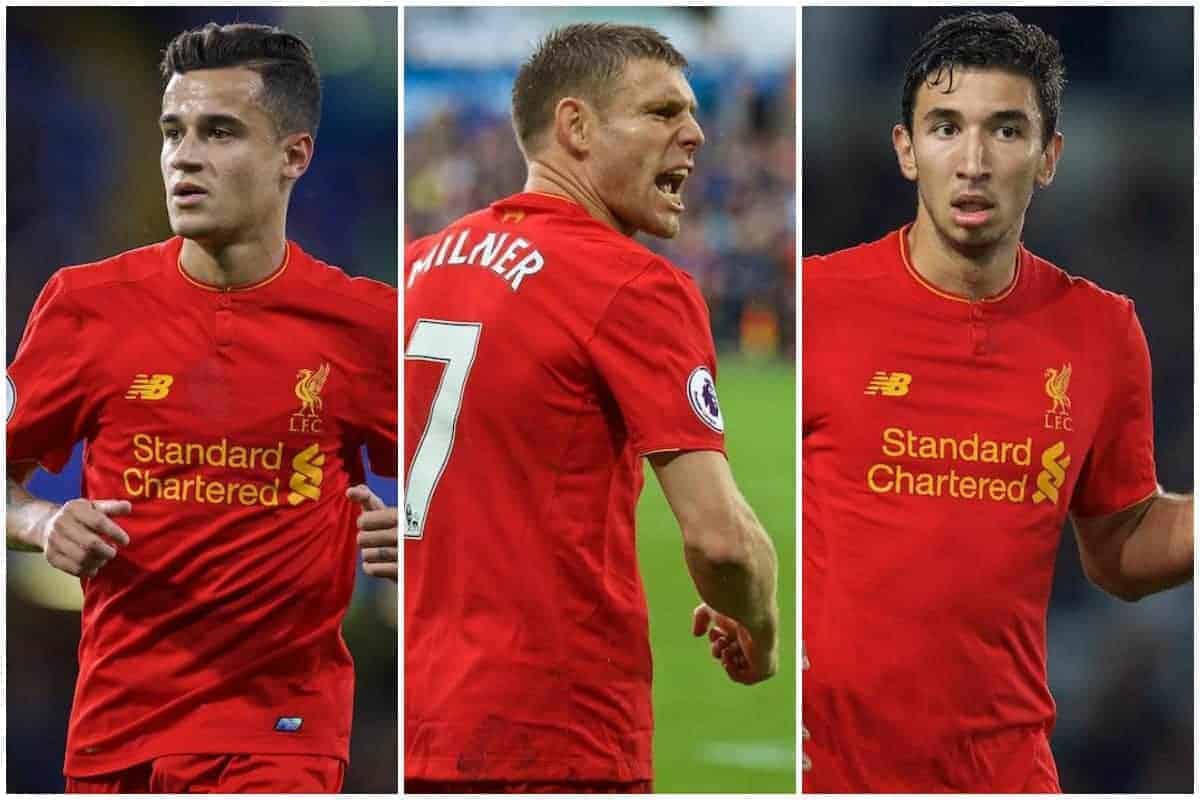 With Lucas Leiva among those doubtful for Liverpool’s clash with Crystal Palace, Jurgen Klopp could be forced to shuffle his deck at the weekend.

Lucas, Joel Matip and Ragnar Klavan are all struggling with minor issues ahead of Sunday’s game, potentially joining Adam Lallana, Jordan Henderson and Sadio Mane on the sidelines.

This gives Klopp a selection problem, as he plots for his side’s eighth game unbeaten, to stabilise their place in the Premier League’s top four.

Joe Gomez is the German’s clear solution at centre-back, with the 19-year-old set to join Dejan Lovren in defence if Matip and Klavan are ruled out, but Lucas’ absence would be more troubling.

While Emre Can and Georginio Wijnaldum are guaranteed starters if fit, Klopp’s third midfield option is less obvious.

Here are three possible solutions if Lucas misses out against Sam Allardyce’s Eagles on Sunday. With Lucas out, Can would be the go-to man in the No. 6 role, particularly given suggestions in midweek that the 23-year-old would prefer to operate deeper in the midfield in the long term.

If that is the case, Liverpool could be lacking thrust and creativity moving into attack, but this would be solved by dropping Philippe Coutinho in alongside Wijnaldum.

Coutinho is arguably at his best when able to thread passes through from midfield, and despite improving in form on the left wing of late, this could provide Klopp with an elite playmaker in the middle of the park.

Naturally, this would deprive Klopp of another of his first-choice forward line, but the fitness of Daniel Sturridge—who has still played just 30 minutes since returning from injury on April 5—gives him another option.

Fielding Coutinho, Can and Wijnaldum in midfield and Sturridge, Roberto Firmino and Divock Origi in attack would be an excellent step for Klopp against Palace.

Option 2: Milner in the middle, Trent at right-back

When navigating Mane’s injury, the illness of Coutinho and the fatigue of Firmino with a switch to a 3-5-2 formation earlier in April, however, Klopp made a more drastic change.

Shifting James Milner into midfield against Stoke City, Klopp afforded his vice-captain a rare outing in his preferred central role.

This saw Nathaniel Clyne move over to left wing-back, with Klopp bringing in Trent Alexander-Arnold at right wing-back.

While the introduction of Coutinho and Firmino at half-time at the Britannia Stadium saw Milner ultimately move back to left-back, this first-half tactical setup suggested Klopp is open to alterations.

How the dynamic of a midfield three of Milner, Can and Wijnaldum would work when settled remains to be seen, but the No. 7 is certainly an option if Lucas is out. With just five games to go before the end of the season, Klopp is likely to opt for experience to get the Reds over the finish line and secure a place in the top four.

But with his longest-serving player potentially sidelined, a more youthful replacement may be required.

Marko Grujic, who joined the club last summer after a six-month loan spell with Red Star Belgrade, has not featured for the first team since November 29, and has played just 29 minutes in the Premier League so far this season.

However, the Serbian’s impressive summer, his burgeoning physicality and his strong displays for the Liverpool U23s suggest he could be ready to make his mark on the English top flight.

With Can sitting, Wijnaldum knitting and Grujic pushing forward in the No. 8 role, the Reds’ midfield would be truly formidable.

Alexander-Arnold could also be an option in the midfield three, while Kevin Stewart is still available—despite finding himself in the wilderness this season, preparing for a summer departure.