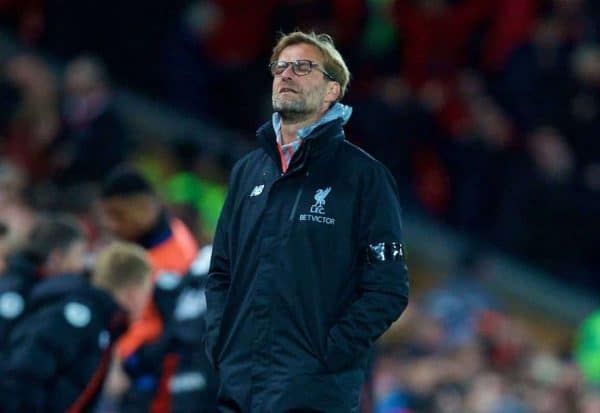 The media bemoaned Liverpool’s inconsistency and felt Jurgen Klopp’s tactical switches backfired as the Reds were pegged back to a 2-2 draw by Bournemouth.

Liverpool’s struggles with the Premier League’s weaker sides continued as the Reds ended up snatching a draw from the jaws of victory against the Cherries.

Klopp’s men were their own worst enemies as they gifted away two dreadful goals, with sharp finishes from Benik Afobe and Josh King punishing individual errors and generally poor defending

A cool finish from Philippe Coutinho and close-range header from Divock Origi looked to have given Liverpool victory, but the Reds failed to hold on to what would have been a big three points.

Klopp will be extremely disappointed by the way his side carelessly chucked away two points, and the result now adds extra pressure to successive tough away games at Stoke City and West Brom.

Here’s what the media made of a frustrating night at Anfield.

Certain journalists discussed Liverpool’s infuriating inability to see off lesser sides as routinely as they do rivals, and feel this could ultimately cost the Reds Champions League qualification.

The Mail’s Dominic King noted how if Liverpool fail to finish in the top-four, it will be down to their struggles against weaker opponents:

In 13 games against the bottom eight teams in the Premier League this season, they have squandered 18 points. If they do not get to where they want to go, look no further than that statistic.

Writing for ESPN, Richard Jolly believes the Reds’ failure to take more than just one point from Bournemouth will be a contributing factor in itself, should the Reds miss out:

Liverpool should have taken six points against Bournemouth this season. They end up with one, and should they miss out on Champions League football, they can point to their inability to hold on to a lead against the south coast club as a reason why.

Reporters bemoaned yet another game in which Klopp’s side fell foul to the same failings that have plagued their progress throughout the season.

The Mirror’s David Maddock questioned the Reds on-going problems with set-pieces and attitude towards lesser games:

Once again, questions will be asked about Liverpool’s inability to not only defend the set-piece but the second and third balls, as they allowed Bournemouth three bites of the cherry.

And once again, questions will be asked about their mentality against the smaller teams, because this was nothing like the side that had destroyed Everton in the Merseyside derby at the weekend.

The Liverpool Echo’s James Pearce thought it was a night that exposed Liverpool’s biggest weaknesses:

However, this was a night that exposed Liverpool’s Achilles heel. They have the worst defensive record in the top seven and with Stoke and West Brom next up they simply have to tighten up.

Half the job was done in restricting the clear-cut chances created by the Cherries, but the issue lies in allowing them two goals when they recorded just as many shots on target.

Curiously it is at Anfield, where Liverpool concede the fewest corners, where they have the most problems.

Maybe it’s an attention issue – but no team has conceded a greater proportion of home goals from set pieces than the Reds – a weighty 43per cent.

Reporters were critical of Klopp’s decision to substitute Coutinho – even if it was forced due to the Brazilian being unwell – and thought his switch to a back-three backfired, with this ultimately costing the Reds three points.

This Is Anfield’s Henry Jackson labelled the substitution “negative” and thought the move to 3-5-2 didn’t work:

The manager’s decision to take off Coutinho for Matip was a strange, negative one, though, and it played right into Bournemouth’s hands. We know Liverpool can’t park the bus, so deciding to made little sense.

Bascombe criticised the tactical shift, feeling it lost the Reds all momentum at a time they had control:

This time, the manager’s vow to adopt caution in an effort to edge his side to the points tally required to keep the Manchester clubs and Arsenal at bay backfired.

Divock Origi had just headed the home side ahead but the momentum shift the home side had enjoyed since half-time came to a halt.

Substitutions remain one of his weaknesses and using just one when so many players looked fatigued was baffling.

But Pearce was also critical, feeling the change took the initiative away from the Reds as they looked to kill the game:

Klopp has made many positive game-changing decisions this season but taking off Coutinho, bringing on Joel Matip and going to three at the back midway through the second half wasn’t one of them.

Liverpool effectively surrendered the initiative. At a time when they were threatening to kill the game off, they suddenly sat back – seeking to protect what they had and inviting pressure. It cost them dear.

On that point, Bascombe criticised Liverpool’s wastefulness on the counter attack, and felt this provided Bournemouth with confidence to keep plugging away:

Liverpool should also have been smarter on the counter-attack when the opportunities for a third goal presented themselves – and Mignolet had little to do – but Bournemouth took confidence in their possession and the edginess in the home ranks was as defining as Steve Cook’s long throw-in and King’s turn and strike.

However, Maddock felt the Reds’ paid the price for leaving too much space for Bournemouth to exploit in the channels:

Almost as predictably, Bournemouth capitalised, using the home side’s tentative approach to draw inspiration… and a route to goal as the Reds left channels between the centre-halves to exploit.

The first game of a second spell this season for Klopp’s side without Sadio Mane, reporters discussed how the team performed without the key Senegalese, with some encouraged by the way certain Reds stepped up.

Jolly thought one positive from the night came with how key attackers players took responsibility, in contrast to in January:

And, unlike in January, they assumed the responsibility for finding the net. Origi and Coutinho have now both scored two goals in as many games when they only had one in 15 and 17 respectively beforehand. Their returns to form have been both welcome and well-timed.

Prentice feels Origi showed signs that he can provide in Mane’s absence:

If Sadio Mane‘s season really is over Divock Origi has a huge role to play in Liverpool’s chase for top four status.

He started playing deep, but ended leading the line, showing the movement and ability to interchange which Klopp demands.

Jolly also thought Origi’s goal illustrated the benefits of having a natural, predatory striker up front:

If there is a case for playing Origi on the right and allowing Firmino to act as the false nine, the striker showed why Klopp used him centrally. He scored a striker’s goal, heading in Wijnaldum’s cross and while his has been a stop-start season, it is acquiring momentum again.

Bascombe too saw positives with Origi’s display, but feels the Belgian needs to perform more consistently throughout the 90 minutes:

Then Origi stepped up. He is promising in patches, particularly when he moves wide and faces full-backs with a willingness to utilise his pace. That is not often enough.

The Mirror’s James Whaling was impressed by the link-up play of the Reds’ Brazilian duo:

Philippe Coutinho and Roberto Firmino are a joy to watch when they link up as they did for Liverpool’s first goal this evening.

Are they the best partnership in the Premier League?

Finally, King praised Gini Wijnaldum for the way the Dutchman responded to his early error:

Wijnaldum had to be dragged off his haunches after his blunder but rather than shrink, he worked tirelessly to rectify the situation.