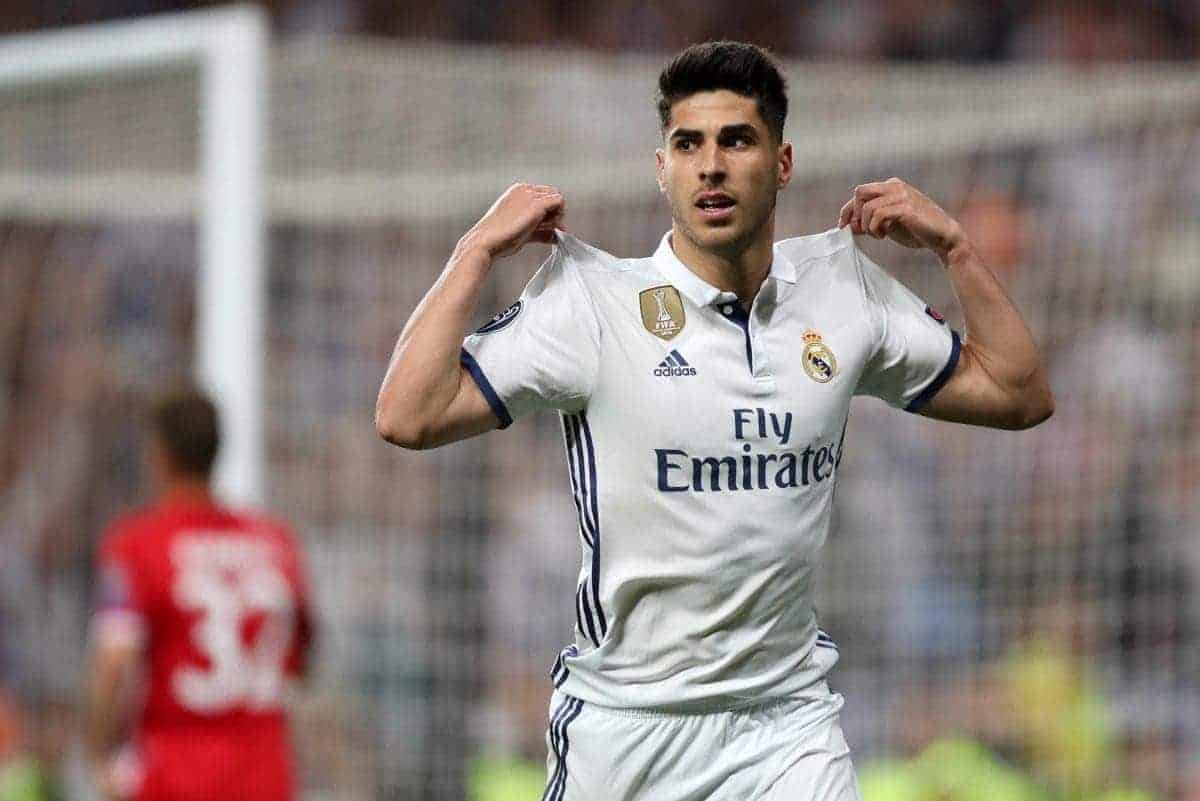 Liverpool are reported to have made a big-money bid for Real Madrid’s exciting young Spanish winger Marco Asensio, ahead of the summer.

Asensio has been in excellent form for Real since coming into the side on a regular basis this season, having previously spent time on loan with Mallorca and Espanyol.

The 21-year-old has covered well during Gareth Bale’s injury absences this term, and has scored nine and assisted three in 29 appearances in all competitions so far.

This included a goal in Tuesday night’s controversial 4-2 victory over Bayern Munich in the Champions League quarter-finals, announcing Asensio to a bigger stage.

And he seems to be set to garner plenty of interest leading into the summer, with Liverpool among those chasing the winger.

According to Spanish publication AS, corroborating claims from radio station COPE, the Reds have made a £42 million bid for Asensio.

However, they also reveal that Real rejected this off-hand, having “no intention” of parting ways with one of their most promising future talents.

“Zinedine Zidane has complete faith in Asensio. The Madrid coach plans to give the 21 year old a key role in his team next season,” they report.

“In fact, the Frenchman has made the club aware that he is willing to sell James [Rodriguez], in order to advance Asensio’s development.” Rodriguez is another player said to be on Liverpool’s radar for the upcoming transfer window, with Sky Sports’ La Liga expert Guillem Balague underlining this at the beginning of April.

With Asensio more favoured by Zidane, it seems like Rodriguez will be leaving the Santiago Bernabeu after three season.

It is unlikely that Liverpool will secure Rodriguez’s signature, however, with Balague claiming that “he would like to go to a club like Chelsea or Manchester United.”

If these reports are to be believed, however, it is clear that Jurgen Klopp has set his sights on further reinforcement in attack for the 2017/18 campaign.

And with Athletic Bilbao winger Inaki Williams also said to be a target for Liverpool, with the 22-year-old available for £42 million, it would appear that the club are willing to spend big.

Klopp’s only genuine, senior wide option at this stage is Sadio Mane, with Lazar Markovic due to leave after his loan spell with Hull City and Sheyi Ojo and Harry Wilson yet to fully break through.

Adding a player with the proven quality and potential of Asensio would be an excellent move, while his opposite number at Bayern, Douglas Costa, could also be one to keep an eye on.