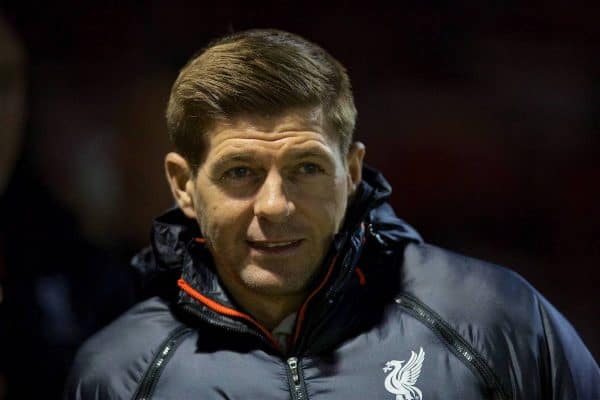 Steven Gerrard is ready to take the next step in his Liverpool coaching career, according to former Reds assistant boss Phil Thompson.

According to the Times, Gerrard is set to be named as the club’s new under-18 team coach, his first role in charge of a team since retiring as a player.

Gerrard has been coaching at various levels of the Liverpool academy since January.

“He’s been through all the levels so I would think it was the right time for Steven to step up,” Thompson told Sky Sports News HQ.

“Stevie does understand you’ve got to learn your trade. Sometimes you can’t just go from being a player [to being a manager].

“He’s been going around the teams there at Liverpool, helping out with everybody, (and) this is the next step in his development.”

Liverpool would neither confirm nor deny the reports of Gerrard having a new position when contacted by Press Association Sport.

Thompson sees the 36-year-old former Liverpool and England captain as having a long-term future with the club that could one day see him become manager.

“I would like to think so,” he said. “I think if you can start lower down it does help.

“Steven, hopefully he does have that potential to go on and maybe in quite a few years’ time…

“Maybe in the next couple of years we’ll see him coaching with the first team.

“And then maybe a few years after that he’ll be in contention for the top job.”