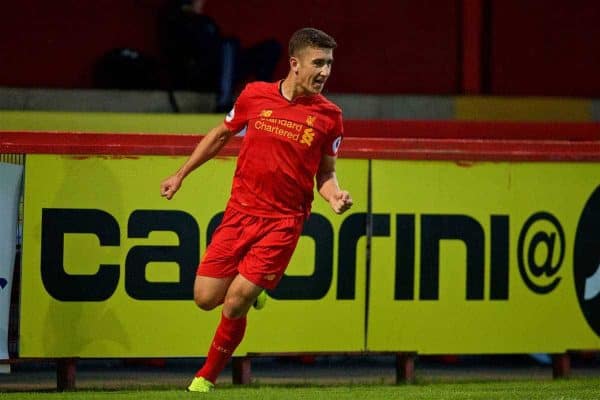 Liverpool U23s midfielder Cameron Brannagan made his first appearance for the club since his loan with Fleetwood Town in a 4-1 win over Mansfield.

The young Reds welcomed their Nottinghamshire counterparts to Kirkby for a Thursday afternoon friendly, after their competitive campaign ended with a 2-1 win at Everton on Monday night.

Mike Garrity called upon a pair of returning loanees, with Brannagan also joined by Lloyd Jones, who spent the majority of the season with Swindon Town in League One.

Shamal George also started, having joined first-team training on Wednesday after a lengthy period out with injury, lining up between the sticks.

It took under 10 minutes for Brannagan and Jones to combine for the opener with the defender heading from the former U23s captain’s corner.

Brannagan was the involved in the Reds’ second, hitting the bar with a powerful free-kick, with Toni Gomes on hand to drive home the rebound.

Gomes netted his second, and Liverpool’s third, after half-time, before completing his hat-trick with a header as the clash reached its conclusion, with Brannagan influential in the buildup.

George was unfortunate to concede shortly before Gomes’ third goal, unable to stop a Mansfield penalty despite diving the right way, in the only blot on the U23s’ copybook on Thursday.

Brannagan’s return presents an interesting situation for Liverpool, with the 21-year-old previously considered one of the club’s brightest prospects.

He made nine appearances in all competitions last season, signing a new long-term contract with the Reds shortly after Jurgen Klopp‘s arrival in 2015.

Liverpool rejected a £1 million bid for the midfielder from Wigan Athletic last summer, before a proposed loan move to the DW Stadium fell through due to a disagreement over game time.

Brannagan spent the first half of the season with the U23s, failing to make his 10th outing for the first team, before joining Fleetwood for the second half of 2016/17.

He played 14 times for the Trawlermen, helping Uwe Rosler’s side to the League One playoffs, but has made his way back to Merseyside after their 1-0 aggregate defeat to Bradford City in the semi-finals.

Whether he is able to carve out a future under Klopp remains to be seen, but if he continues to impress he could be considered, with the German in need of a bigger squad next term.