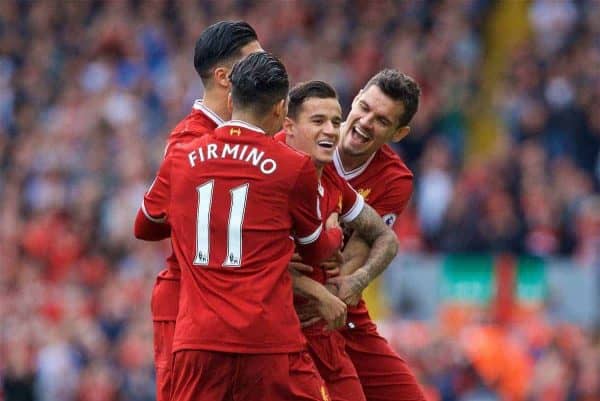 Liverpool were in excellent form as they capped an excellent season with a 3-0 win at home to Middlesbrough, returning to the Champions League.

With Boro camping 10 men behind the ball for the majority of the afternoon, Mignolet was forced to keep on his toes for rare openings for the visitors, and coped extremely well.

The Belgian has undergone a marked improvement since the turn of the year, and Jurgen Klopp faces an interesting decision over whether to keep the faith in his current first choice as the Reds embark on a Champions League campaign.

The right-back has come under criticism for his lack of end product this season, and this was evident once again as Clyne shanked a great opportunity wide in the box in the first five minutes.

He continued to probe down the right, with his endeavour to contribute commendable, but it was more of the same once again from Liverpool’s No. 2.

It’s been a solid first season for Matip at Liverpool, and the lofty centre-back continued in the same vein against Boro: calm, composed and slick.

When the Reds were struggling for a breakthrough, Matip provided some useful balls into midfield, while his defensive efforts next to a struggling partner were impressive.

Lovren was absolutely abysmal in the first half at Anfield, encapsulated by two moments: a let-off after fouling Patrick Bamford in the box, and a panicky clearance out for a corner under no pressure.

He had a lot less to do after the break, and this worked in his advantage, but in a game that Liverpool were expected to—and eventually did—dominate, Lovren was far from good enough.

Milner produced another performance of sheer persistence at the back and—barring a dangerous foul in the first half—held strong, while his drive moving forward gave the Reds a much-needed extra element.

It remains to be seen whether he is still Klopp’s first-choice left-back at the end of the summer, but the 31-year-old has been largely competent in an unnatural role.

Can was in the thick of it throughout, and continued his positive run of form with another mature display at the base of Klopp’s midfield diamond.

The German never shirked responsibility, and demanded the ball constantly, once again highlighting why a new, improved contract should be a summer priority.

It was an interesting game for Wijnaldum, who was truly anonymous for much of the first half—to a considerable detriment to Liverpool’s efforts on the counter.

But, in a flash, the Dutchman announced himself, driving into the box with a one-two and hammering home the opener, and from that point on, he was in fine form.

It’s been a brilliant maiden campaign for Wijnaldum, who ends 2016/17 with the joint-most assists of any Liverpool player, with 11.

Coutinho inspired the Reds to victory at West Ham in a new, deeper role in the midfield, and continued this duty as Jurgen Klopp once again deployed the diamond in the Anfield sun.

While he was unable to impose himself quite as much at home, he still pulled the strings, and his free-kick early on in the second half ensured he ended the season as Liverpool’s top goalscorer, with 14.

With Coutinho operating alongside Wijnaldum in the middle of the park, Lallana was charged with a focused attacking duty at the tip of the diamond, supporting Roberto Firmino and Daniel Sturridge.

Like Firmino, he was not able to influence the game as he would have liked before the break, but he grew as it went on, and showed great commitment to drive forward for Liverpool’s third.

With speculation mounting over a possible move this summer, Sturridge made what could have been his last competitive appearance for the Reds on a balmy Sunday afternoon.

He was arguably Liverpool’s most energetic presence throughout his 82 minutes on the pitch, but somehow it never came off for him, and applauding the Anfield crowd as he departed, he will have been disappointed.

After missing the trip to West Ham last weekend, Firmino was restored to the starting lineup at Divock Origi‘s expense, underlining his importance to Klopp’s system.

He struggled to get into the game in the first half, largely shunted out wide as Boro held strong, but he did improve throughout, and it was his layoff that saw Wijnaldum through for the opener.

Lucas Leiva (on for Firmino, 79′) – N/A – A great moment for the Brazilian, who may well have played his final competitive game for the Reds after 10 years.

Divock Origi (on for Sturridge, 82′) – N/A – Struggled with injury in the buildup, but given a welcome runout after a hit-and-miss campaign.

Alberto Moreno (on for Milner, 85′) – N/A – A classy touch from Klopp to introduce his most peripheral of figures late on.

After witnessing an excellent display from his side away to West Ham last time out, Klopp was vindicated in his decision to keep faith in his new 4-4-2 diamond system.

With tension building in the first half, Klopp remained patient, and was ultimately rewarded just before half-time as Wijnaldum struck, putting Liverpool back in the driver’s seat.

And it was no doubt the German motivating the Reds to emerge for the second half with renewed vigour, and with two more goals to come, it proved pivotal.

Klopp can now look toward next season—and his, and Liverpool’s, return to Europe’s elite.