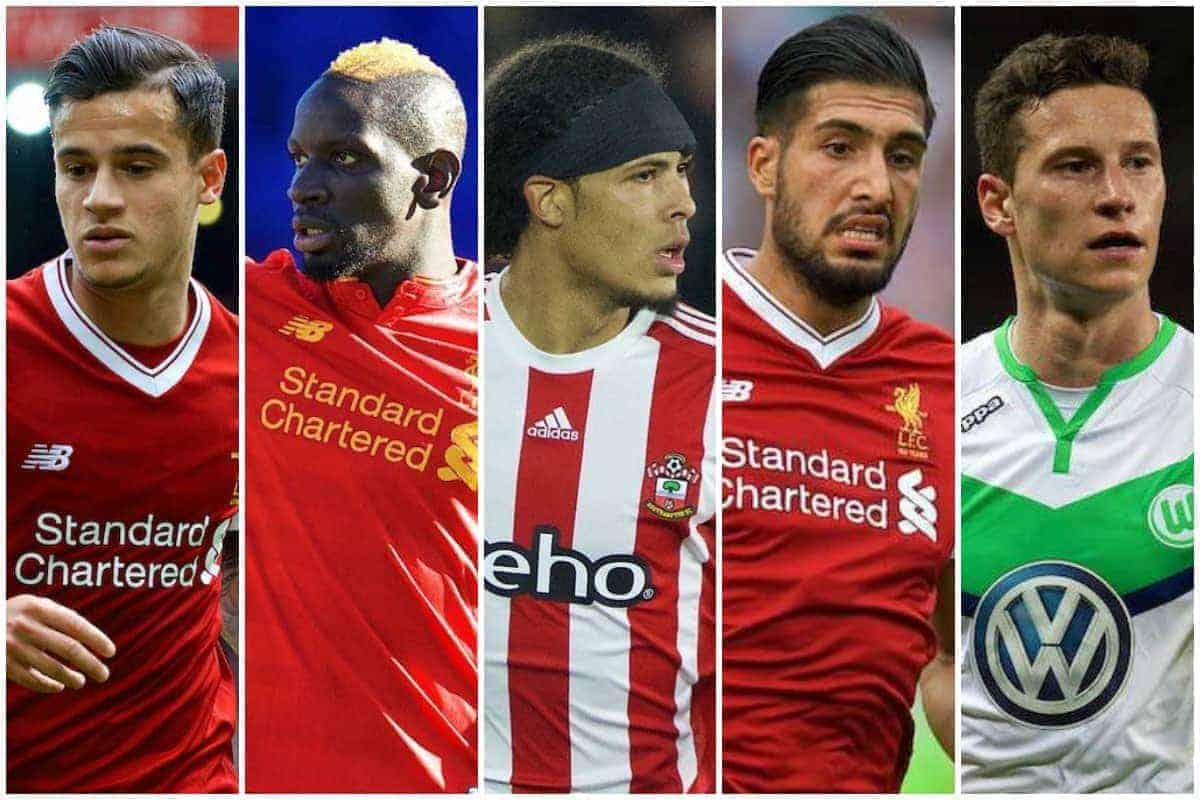 We round up the latest Liverpool transfer news and rumours on the eve of their first Anfield clash of the 2017/18 campaign against Crystal Palace.

The Reds take on Frank de Boer’s side looking to build on their 2-1 win over Hoffenheim in their Champions League play-off first leg in midweek.

With his hands still tied by injuries, Jurgen Klopp has few options available to alter his side on Saturday, with the club’s backroom still working on further additions.

Here’s the latest from the rumour mill, with the August 31 deadline fast approaching.

But the Reds are not willing to sell their No. 10, turning down bids of £72 million and £90.4 million before Coutinho handed in a transfer request last week.

Now, they have rejected a third approach from the Liga giants, with the Times‘ Paul Joyce reporting that this was worth a remarkable £118 million.

This underlines Liverpool’s resolve in keeping Coutinho at the club this summer, despite his desire to leave. Klopp finds himself in the throes of a transfer tussle as Liverpool fend off Barcelona in their efforts to sign Coutinho.

But the German, speaking ahead of Saturday’s clash with Palace, believes the Reds’ “project” should be enough to convince his current crop their future lies on Merseyside.

“I think for each player Liverpool is a very good club, a very good team in the moment,” he said.

“We have a good age of the group. We have very young boys, experience—it’s a good mix and we are on our way.

“I don’t see a lot of reasons for each player to leave the club at the moment and that’s just in general.”

According to BBC Sport, while the Baggies have turned down an £18 million bid for their captain, a departure is not out of the question.

And with West Brom “having already spoken to Liverpool about Sakho once this summer,” Pulis is said to have approached the Reds again to discuss a possible deal.

Liverpool value Sakho at £30 million, but with just two weeks left before the end of the transfer window, they may be forced to lower their demands if they want to secure his sale.

But according to the Times, if new Saints manager Mauricio Pellegrino wishes to strengthen his squad further, it must be financed by sales.

The club sold an 80 percent stake to Chinese businessman Jisheng Gao this week, and he is said to have made it clear to Pellegrino “not to expect any additional transfer funds this month.”

“Pellegrino has been told that he must continue to sell players before he can buy,” Matt Hughes writes.

“Which could affect the club’s determination to keep hold of Virgil van Dijk amid interest from Liverpool and Chelsea.” While they have been given hope in their pursuit of Van Dijk, Liverpool have turned elsewhere following a failure to sign RB Leipzig midfielder Naby Keita.

The Times‘ Paul Joyce claims the Reds are actively seeking alternatives to the Guinean, who was the subject of two failed bids earlier this summer.

However, Joyce reveals that the club have “downplayed” speculation over a move for Nice midfielder Jean Michael Seri.

Seri was mooted as a possible target by the Guardian earlier this week, with the Ivory Coast international available for around £36 million.

The 26-year-old would be a fine addition to Klopp’s squad, but it remains to be seen whether he is a genuine target.

Juventus ‘Wait Until January’ For Can Move

With Klopp looking to bolster his ranks in the middle of the park, the German cannot afford to lose any of his current senior options.

That includes Emre Can, who is in the final year of his contract with no sign of a breakthrough in negotiations over an extension, despite positive indications.

Juventus are widely reported to be interested in the 23-year-old, but Liverpool are not willing to sell.

And Corriere dello Sport claim that the Serie A side are now prepared to wait until January before approaching Can, when they will be free to discuss a pre-contract agreement.

It was reported on Thursday that PSG manager Unai Emery had made it clear to Germany winger Julian Draxler that he didn’t feature in his plans this season.

This has led to speculation over a possible move to Liverpool, with the Reds having pursued the 23-year-old before he joined PSG in January.

And according to the Times, Draxler is available for around £32 million which, given the state of the transfer market this summer, represents a bargain fee for a top-level talent.

However, they report that Arsenal, Inter Milan and Dortmund are all interested.