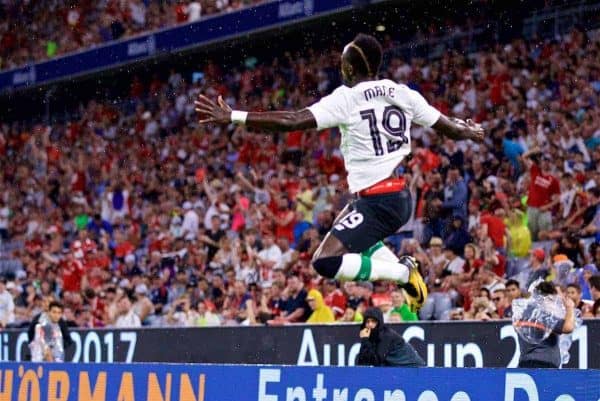 Liverpool produced a confident, controlled and impressive display to defeat Bayern Munich 3-0 in the Audi Cup on Tuesday night.

Jurgen Klopp named a strong starting XI, with the attacking trio of Mohamed Salah, Roberto Firmino and Sadio Mane lining up ahead of Philippe Coutinho for the first time.

Coutinho was joined by Jordan Henderson and Emre Can in midfield, with a back four of Trent Alexander-Arnold, Joel Matip, Dejan Lovren and Alberto Moreno.

Loris Karius was given the nod in goal after a slight injury saw him miss the recent games in Asia and against Hertha Berlin. The German being offered an opportunity back in familiar surroundings.

A hot day in Munich saw kick-off at 8.30pm local time with a temperature of 29 degrees, before a thunderstorm added to the atmosphere for what was a very elaborate build-up to a pre-season friendly.

Liverpool, sporting their new away kit for the first time, opened the scoring in the seventh minute when Firmino won the ball centrally and released Mane who finished with his left foot.

It was almost 2-0 shortly after, when Moreno’s low cross found Salah at the back post but his near-post shot was saved by the ‘keeper.

A Liverpool free-kick midway through the first-half saw Moreno then force another save. The Spaniard was also defensively more sound early on, helping to prevent more than one Bayern attack.

It was 2-0 on 34 minutes, with the Reds’ attack again impressing. Mane’s skill released Moreno, whose shot was parried into the path of Salah to head in from close range.

Half-time saw two changes, with Adam Lallana and Gini Wijnaldum replacing Sadio Mane and Emre Can, which saw Coutinho move into the attack.

Liverpool continued their confident play, controlling possession well for much of the early exchanges of the second 45.

Shortly after, there was a goal disallowed after some superb play by Kent on the left setup Grujic to fire home.

The icing on the cake arrived in the 83rd minute when Sturridge was put through on goal and produced a sublimely confident chip over the ‘keeper for 3-0.

Unfortunately, Sturridge appeared to pick up an injury while scoring and was subbed shortly after.