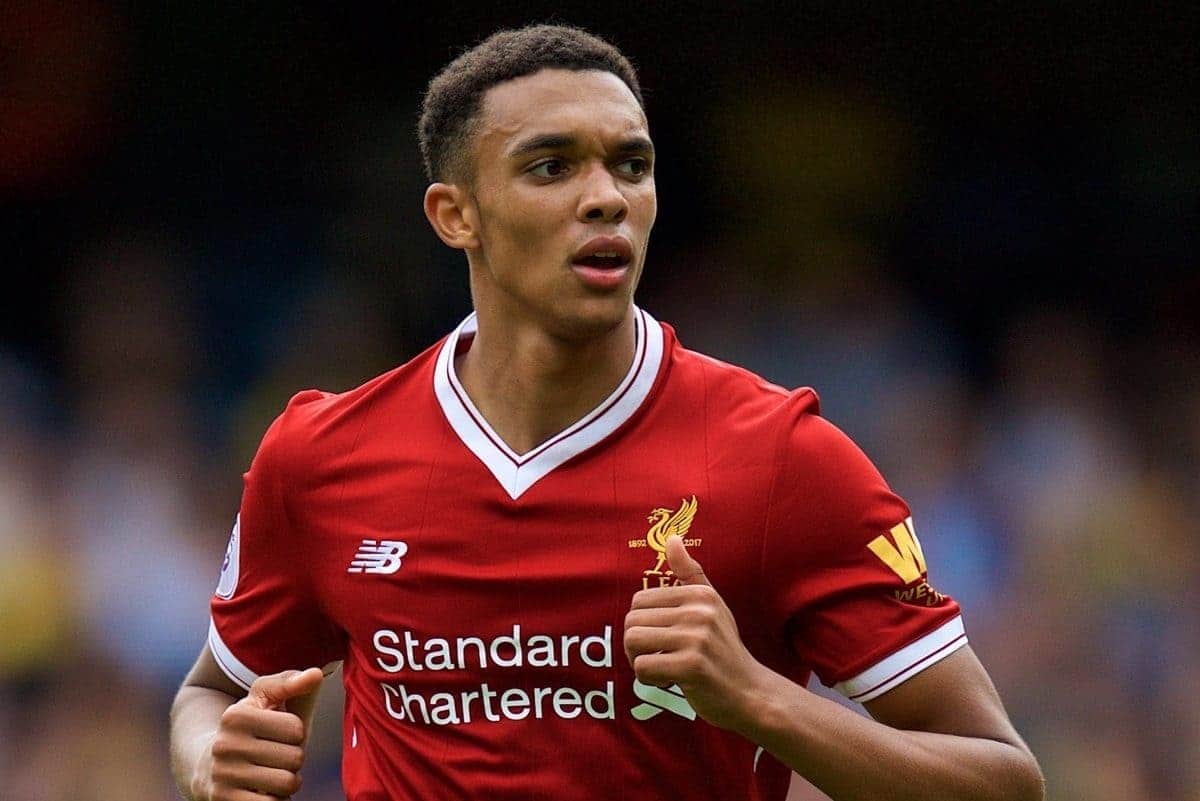 Trent Alexander-Arnold is proving a hugely popular player at Liverpool, with Joe Gomez and Alberto Moreno both lavishing praise on the youngster.

The 18-year-old scored on his European debut for the Reds on Tuesday night, firing the opener in the 2-1 Champions League play-off first-leg win at Hoffenheim.

That was Alexander-Arnold’s second start of the season, and his 14th appearance for Liverpool overall, having been promoted to Jurgen Klopp‘s first team last season.

With Nathaniel Clyne sidelined with a back injury, Alexander-Arnold has stepped up impressively, and is making his mark both on the pitch and on the training field.

And Gomez, speaking on LFCTV’s LFC Later, praised his fellow defender for his “rapid rise.”

“It’s all down to his ability. He’s stepped in and he’s not been afraid to show who he is in training,” he said.

“He’s obviously taken his opportunity very well, and he deserves it.

“He was sort of in the background last season, with Clyney being so consistent throughout, but every time Trent comes in he makes a good impact.

“Obviously no one wishes injury upon anyone, and hopefully Clyney comes back soon, but I think Trent’s a great player to fill his shoes.”

Alexander-Arnold’s free-kick at the Rhein-Neckar-Arena was a landmark moment for the teenager.

It is not only his first senior goal for the club, but it could prove to be one of the most crucial strikes of Liverpool’s season.

Gomez went into detail about Alexander-Arnold’s ability from set-pieces, and the faith James Milner had in the No. 66, watching on from the substitutes’ bench.

“It was a great goal, he’s a great player. There was some speculation, we didn’t know who was going to take it,” he explained.

“And even on the bench, the gaffer walked over to us and Milly said ‘Trent’s going to take it’, because after training sometimes him and Ben [Woodburn] practice free-kicks.

“There’s always banter with the gaffer, when there’s a shocking one, but I played in an U23s game when he took one and scored, so I know he’s got a good whip on him.”

Alexander-Arnold has lined up on the opposite flank to Alberto Moreno in the last two games, with the Spaniard surprisingly offered another opportunity after a season in obscurity.

And Moreno joined Gomez in praise of the youngster, envisaging an even brighter future for Liverpool’s latest Scouse talent.

“For me, as a player, I really like Trent. He’s a top player and he can go on to be an incredible player,” he told LiverpoolFC.com.

“From training with him every day, I can tell you that he’s very good. It’s no surprise to me to see the way he’s playing in games.

“It’s a very beautiful thing that I think he really deserves.

“He’s a really good young lad, a good person, very calm and humble and I hope he goes on to become a great footballer in years to come.”

It is still early days for Alexander-Arnold, who is likely to play his 15th game for the club in Saturday’s clash with Crystal Palace, but he has clearly made a big impact already.