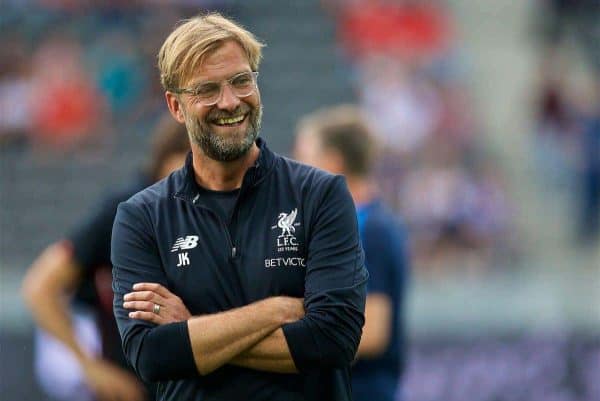 Jurgen Klopp has made nine changes to his side for Wednesday night’s Audi Cup ‘final’ clash with Atletico Madrid at Bayern Munich’s Allianz Arena.

The Reds sealed a matchup with Diego Simeone’s Atletico through a 3-0 victory over Bayern the previous evening, in a hugely impressive display.

Having also won against Tranmere Rovers, Crystal Palace, Leicester City and Hertha Berlin this summer, Liverpool will be looking to continue a positive pre-season.

But after naming the majority of his first-choice starting lineup against Bayern, Klopp has opted to shuffle his deck.

Danny Ward starts the game in goal, and is likely to play the full 90 minutes, operating behind a back four of Jon Flanagan, Joe Gomez, Ragnar Klavan and James Milner.

In midfield, Emre Can is joined by Adam Lallana and Georginio Wijnaldum, with Can one of only two players to keep their starting place from Tuesday.

Dominic Solanke leads the line in attack, flanked by Sadio Mane and Ben Woodburn, with Klopp set to deploy a 4-3-3 formation once again.

With Nathaniel Clyne sidelined, Dejan Lovren, Alberto Moreno, Philippe Coutinho and Mohamed Salah rested and Daniel Sturridge pulling up with a thigh problem on Tuesday night, Klopp’s squad is reduced at the Allianz.

But the German is still able to call upon the likes of Joel Matip, Jordan Henderson and Roberto Firmino from his substitutes’ bench.

The last time the Reds played Atletico was in 2010, when they were knocked out of the semi-finals of the Europe League on away goals, despite home efforts from Alberto Aquilani and Yossi Benayoun.

Much has changed since that day at Anfield, and Liverpool will be looking to build for a strong 2017/18 campaign with another fine performance in Germany.