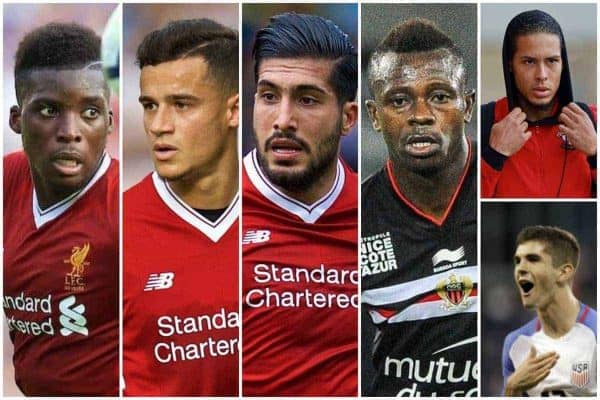 We round up the latest Liverpool transfer rumours, as Jurgen Klopp‘s side celebrate their 2-1 Champions League play-off first-leg win at Hoffenheim.

The Reds produced a strong performance at the Rhein-Neckar-Arena on Tuesday night, capped by a sensational first goal from Trent Alexander-Arnold on his European debut.

Off the field, Klopp will be well aware that Thursday marks a fortnight before the summer transfer window closes, with plenty of work still to be done.

Here’s the latest from the rumour mill for Liverpool on Wednesday.

Having fielded offers from Aston Villa, Middlesbrough and Derby County, Sheyi Ojo has completed a season-long loan move to Fulham.

The 20-year-old will spend the rest of the 2017/18 campaign at Craven Cottage, operating under an impressive young manager in Slavisa Jokanovic in the Championship.

“I’ve had the pleasure of spending time with Sheyi and his family, and I’ve seen firsthand what a tremendous work ethic Sheyi has both on and off the pitch.

“He possesses fantastic physical talents and also carries himself with poise and class, and I know that he’s going to be a great addition to our squad.”

Coutinho to ‘Go on Strike’ to Force Move

Absent from the Reds’ first two games of the season so far, Philippe Coutinho has continued to report to Melwood to undergo treatment on a back injury.

His desire to leave Liverpool this summer has not subsided, however, with the Brazilian eager to join Barcelona.

According to Spanish publication Mundo Deportivo, Coutinho is prepared to go on strike and “he does not plan to wear [the Liverpool shirt] again.”

They even claim that his absence in Hoffenheim “was the first warning,” seemingly disputing the club’s line that Coutinho is currently sidelined due to his ailing fitness.

It is worth nothing that Mundo Deportivo is based in Barcelona, however, as the Catalan press continue their bid to further unsettle the playmaker.

Can Insists Reds Can “Go Again” Without Coutinho

Coutinho’s absence has clearly had an effect on Liverpool’s output on the pitch, but the squad have continued to insist that it has not affected morale.

And Emre Can, discussing the possibility of his team-mate leaving this summer, believes the Reds can “go again” without him.

“[Speculation is] no problem for us, nobody in the team speaks about that,” he told Viasat Football on Tuesday.

“Of course, if Philippe stays with us everybody is happy. In my eyes, he is one of the best players in the world.

“But if he goes, if he wants to go, then everybody will wish him the best and we have to go again.”

Barcelona & Juventus Move on to Alternatives?

While their Spanish counterparts continue the charm offensive, reports elsewhere have indicated a possible shift in Barcelona’s stance over Coutinho.

According to La Gazzetta dello Sport, the Liga giants have made an approach for Napoli midfielder Lorenzo Insigne, who was himself touted with a move to Merseyside last week.

However, their £55 million bid for the Italy international is said to have been rejected, in another blow for Ernesto Valverde’s side.

Meanwhile Juventus’ interest in Can may have been thwarted by Liverpool’s insistence he won’t be leaving this summer, despite the German entering the final year of his contract.

The Guardian report that the Serie A side have instead agreed a bargain £18.2 million deal to sign Paris Saint-Germain’s Blaise Matuidi.

Liverpool ‘About to Seal’ Seri Deal

With the collapse of Liverpool’s pursuit of RB Leipzig midfielder Naby Keita, Klopp seems to have turned his attention to Nice’s Jean Michael Seri.

The 26-year-old is reportedly available for around £34 million, and would provide the Reds with another excellent option in the middle of the park.

And according to dubious French outlet TransferMarketWeb, Liverpool are “about to seal the deal,” snatching the Ligue 1 talent from the under the noses of rivals Arsenal.

It is unlikely to be that straightforward, but Seri would be a fine addition to Klopp’s squad.

With just over two weeks left to go before the end of the transfer window, Liverpool may be inching closer to a potential deal to sign Virgil van Dijk.

This comes with Southampton reportedly making a bid for the Dutchman’s replacement: his compatriot, Lazio centre-back Wesley Hoedt.

Sky Italia claim that the Saints have offered around £15.5 million for the 23-year-old, who would join Maya Yoshida, Jack Stephens, Florin Gardos and Jan Bednarek in Mauricio Pellegrino’s squad.

However, there are still suggestions that Southampton would not consider selling Van Dijk to Liverpool.

But the United States international has moved swiftly to quash talk of a possible move to Anfield, speaking to SportBild.

“Yes, I have read that as well. What can I say? I’m focused on the start of the season,” he said.

“I’ll lay it on the line for you: I am not thinking about changing clubs.

“After all, I only signed a new deal through to 2020 in January. I am very happy at Dortmund.”