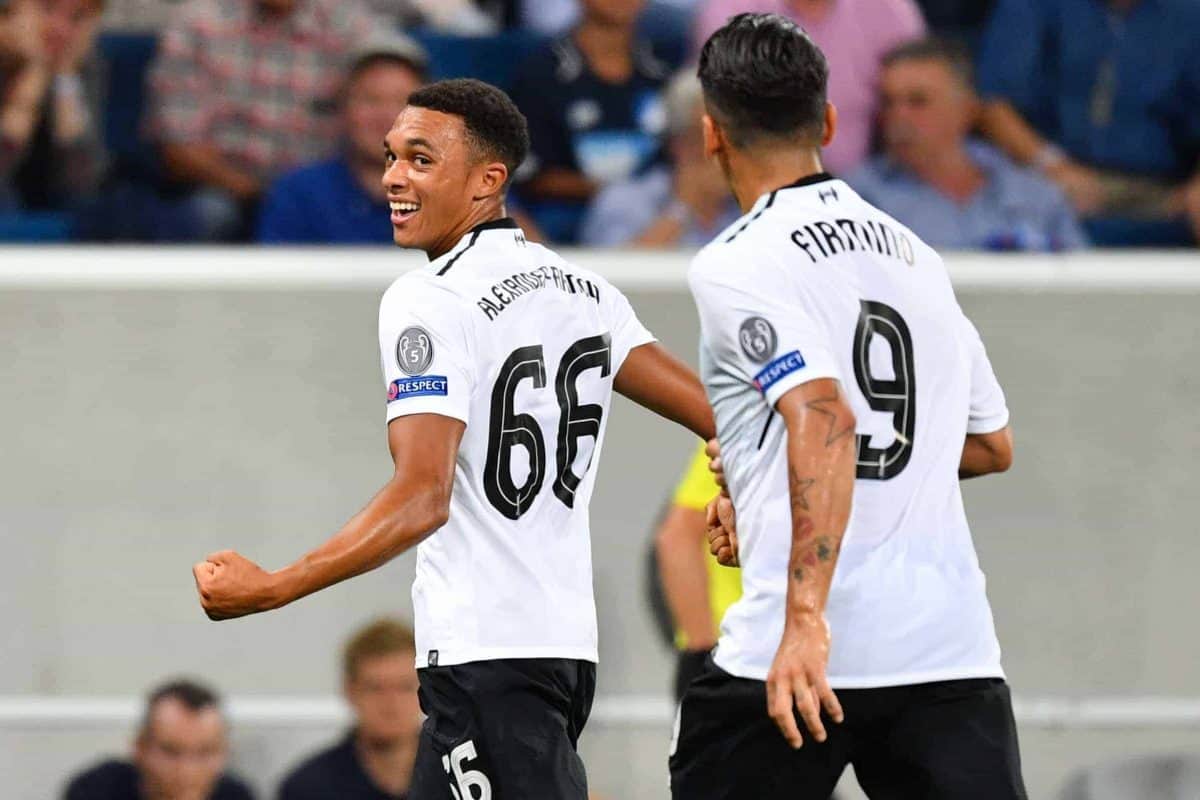 Liverpool came away with a crucial 2-1 victory in the first leg of their Champions League play-off against Hoffenheim on Tuesday night.

Youngster Trent Alexander-Arnold produced an unforgettable moment when he eventually broke the deadlock shortly after the half-hour on his first European appearance for the club.

James Milner was introduced in the second half and he was instrumental in doubling Liverpool’s lead as it was his cross which deflected into the top corner by Havard Nordtveit.

Mark Uth grabbed a goal near the end for Hoffenheim but Liverpool held on to secure a crucial 2-0 victory.

Here are all the reactions from Liverpool supporters throughout the match…

“I wonder how long it will take for Hoffenheim to score from a corner? It’s the same defence so it’s bound to happen!”

Midfield 3 each need to be 100% better than on Saturday but confident that we'll have lots of opportunity for full gegenpressing tonight.

So there's ONLY VVD out there better than #Lovren? ?

“Jesus, five minutes in and Lovren is all over the shop again. It’s going to be a loooooooong night.”

10mins in lovren has nearly cost us 3 goals already….#prayforsakho

Occasionally I try and defend Lovren, but my god he's awful when he wants to be.

Gonna be one of my favourite Liverpool goals that.

Make him captain of everything

Special goal from a special player

But there was criticism for Moreno…

Last time we had Moreno starting in a big European game, I spent an entire month chugging window cleaner.

“Moreno. WHAT ARE YOU DOING?”

– SidLFC on the forums.

Well done, LFC. Annoying to concede late on but two away goals should hold us in good stead at Anfield next week. ??

Trent , Can , Mane and Mignolet outstanding. Same old problems with Moreno and Lovren all over the place but what a win #lfc

We played well as a whole but every set piece or counter-attack our defence were in panic mode!”

Happy days. Two away goals. An away win. In a European tie. Take it to Anfield and finish the job. Well played reds #LFC

Rode our luck at times but great result

“LUCKY” But away win is a win. Good. Defence still rubbish though.”

– PJ POP in the comments.

Delighted with that result.

Bring on the 2nd leg. pic.twitter.com/p0qMZlFD2D

Not counting any chickens but I'll be provisionally booking some Champions League related annual leave tomorrow. Great result that.

“TAA was by far our best player tonight. Hendo was shocking and Moreno was left for dust. The defence were all over the place but it’s the result which counts.”

#LFC have ridiculous pace on the flanks with Salah/Trent Mane/Moreno. Just need to shore up the middle.

Winning away to Hoffenheim is no easy feat – went the whole of last season unbeaten at the Rhein-Neckar-Arena. Fine result.

“Good result but Klopp has plenty of work to do.”

– Manic in the comments.

Terrific result tonight, Hoffenheim are tough at home and it shouldn't be underestimated how good it is to come away with the win.

Yes we were not at our best but still managed to beat a side that was unbeaten since the last game of 15/16 season. Klopp the man #LFC