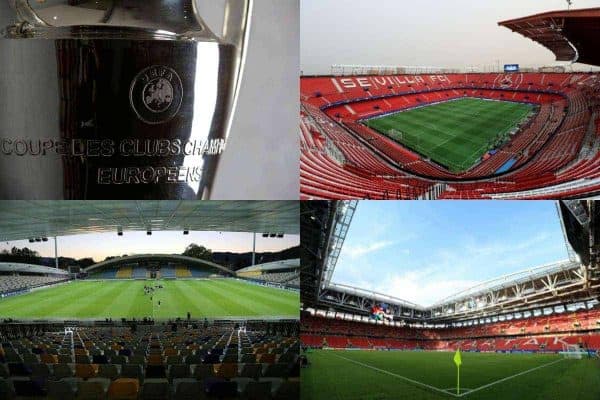 The Reds secured their place among Europe’s elite by virtue of a 6-3 aggregate win over Hoffenheim in the play-offs, shining at Anfield on Wednesday night.

That ensured their name was in the hat for Thursday’s draw in Monaco, and Jurgen Klopp‘s side have been handed a reasonable group as they make their first appearance in the tournament since 2014.

So what can we expect from Liverpool’s Champions League opponents?

Here’s all you need to know about Spartak, Sevilla and Maribor ahead of the Reds’ return to the European summit.

Former Juventus and Atalanta defender Carrera joined Spartak in 2016, leading the Moscow outfit to their first Russian Premier League title since 2001 in his first season in charge.

Previously he served as assistant manager at Juventus, operating as caretaker during Antonio Conte’s ban in 2012, as well as Conte’s assistant for Italy between 2014 and 2016.

Spartak’s best and most important player is, without a doubt, former Liverpool target Quincy Promes, a quick, versatile forward adept at playing off the shoulder of defenders, and boasting a powerful long-range strike.

Captain Denis Glushakov is a staple feature in Carrera’s midfield, serving as a roving box-to-box option alongside Fernando, while Salvatore Bocchetti is Spartak’s leader at the back.

The two sides met in the Champions League group stage in 2001/02, with their last clash seeing Gerard Houllier’s Reds build on a 5-0 home win with an impressive victory in Moscow.

Michael Owen scored a hat-trick against a young Spartak side on a freezing night in Russia.

Berizzo took over from Jorge Sampaoli in May, after three years with fellow Liga side Celta Vigo.

In his playing days, Berizzo was an accomplished centre-back, whose longest spells came with Argentine side Newell’s Old Boys and Celta, finishing his career with Cadiz in 2006.

The 47-year-old looks to have carried his 4-1-4-1 formation over from Celta to Sevilla, deploying a strong midfield base and a pacy attacking line.

Familiar with English sides from his spells with Blackburn Rovers and Stoke City, Steven N’Zonzi has gone from strength to strength since joining Sevilla in 2015.

His bullish, intelligent displays in defensive midfield garnered the attention of Juventus this summer.

The Reds were crushed by Unai Emery’s Sevilla in the Europa League final in Basel, relinquishing a strong 1-0 lead at half-time to suffer a humiliating defeat.

This season provides Liverpool with an opportunity to set a marker for their progress made since that disappointing night at the end of Klopp’s first season in charge.

Milanic has been with Maribor since 2016, and is in his second spell in charge of the Slovenian side, having spent five years with the club between 2008 and 2013.

He has won the Slovenian PrvaLiga five times with Maribor, most recently last season, but proved less successful at Leeds United, spending just 32 days in the dugout at Elland Road.

Slovenia international winger Aleks Pihler has started the campaign strongly, and will serve as a major goal threat for Maribor from the left flank.

Luka Zahovic finished last season as Maribor’s top goalscorer, with 16 in all competitions, while the ageing Marcos Tavares is the club’s all-time most-capped player and record goalscorer.