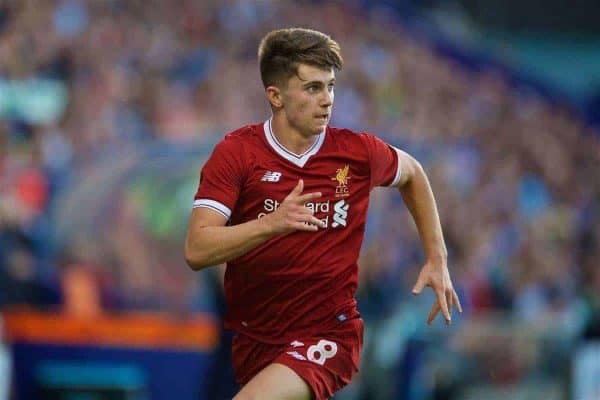 Capping off a remarkable week where he scored on his senior international debut for Wales, Ben Woodburn is set to get a new Liverpool contract when he turns 18.

Impressing over the summer in both forward and midfield roles gave an indication that Woodburn was set for further evolution and growth to his game this season, and it hasn’t taken long to come.

Though he has yet to feature in competitive minutes for Jurgen Klopp‘s team, Woodburn made the Wales squad again for the recent World Cup qualifiers and marked his debut with a match-winning goal.

Now the challenge begins for Woodburn to break into the Reds’ talented first team on a regular basis—but such is the club’s faith that he is capable of doing so, a new six-year contract will be on offer for when he turns 18 in October.

The Mirror report Woodburn will be offered fresh terms next month, likely on around £25,000 per week.

That’s the starting salary for a first-team member, according to the report, and is a significant jump from the maximum allowed salary of £40,000 per year for scholars at the club.

Klopp’s squad has plenty of senior competition for Woodburn to both learn from and try to oust. In the attacking line, where he featured most often last term, the likes of Sadio Mane and Philippe Coutinho have been regulars from the left.

In central midfield, where Woodburn spent time in pre-season, Gini Wijnaldum, Emre Can and now Alex Oxlade-Chamberlain all provide different types of skill sets to the teenager.

International goals aside, he’s likely to still have to bide his time for regular minutes at Anfield, with League Cup appearances and sporadic spots on the bench his likely role for now.

Continual progress is key, for Woodburn as for any young player, and Liverpool looks a perfect breeding ground for such young talent right now.