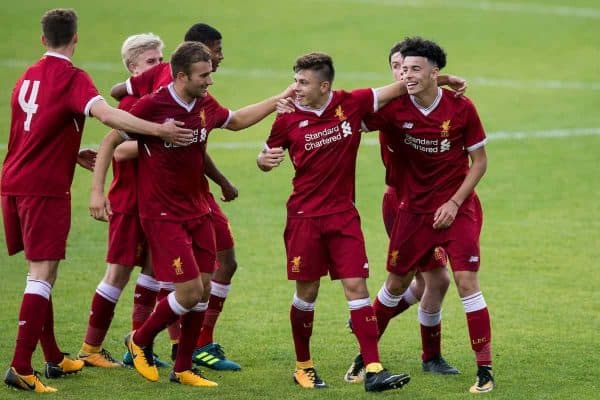 Steven Gerrard’s Liverpool U19s kicked off their UEFA Youth League campaign with a 4-0 win over Sevilla at Prenton Park on Wednesday evening.

The young Reds took to the home of Tranmere Rovers to take on their Spanish counterparts, making their first foray into Europe since the 2014/15 season.

With Gerrard elected to lead the U19s, and U23s manager Neil Critchley supporting him in the dugout, the Liverpool legend’s starting lineup reflected this mix of youth and experience.

The marquee name in the side was Ben Woodburn, and the 17-year-old Wales international, wearing the captain’s armband, helped spur an excellent first half in Birkenhead.

Woodburn started on the right flank, with Liam Millar on the left and Rhian Brewster, who was on the substitutes’ bench for last season’s senior clash with Crystal Palace, up front.

It was Woodburn’s industry and flair that created Liverpool’s first goal of the evening, with the teenager lofting a cross into the penalty area that ultimately fell for Curtis Jones to fire home.

Millar sparked the U19s’ next with an brilliant solo run from the left, rounding the goalkeeper but finding his effort blocked on the line, leaving Herbie Kane to convert.

And Jones added a third before half-time, placing the ball into the bottom corner with an instinctive strike.

Liverpool picked up where they left off after the break, and after Woodburn had expertly found the roving Liam Coyle on the right flank, the U18s laid a perfect cross for Brewster.

But with the striker charging into the six-yard box, he just failed to connect, with the scoresheet continuing to elude him.

With Bobby Adekanye replacing Kane on the hour mark, Woodburn dropped into a role in the middle of the park, similar to that which he operated in for Jurgen Klopp during pre-season.

The young Reds’ fourth came from an unlikely source, but the creator was no surprise, as Woodburn sent in an inch-perfect free-kick for Conor Masterson to chest down and tuck in.

Though they pushed for another goal before full-time, Liverpool’s intensity did fade in the closing stages.

But the damage was already done, and it was the majestic Woodburn who inspired the U19s to victory, with Jones particularly bright in front of goal.