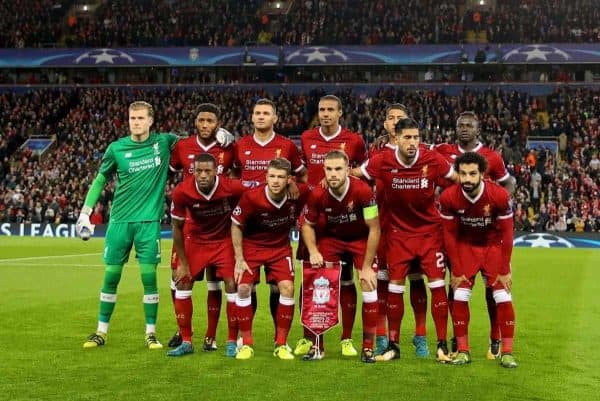 Liverpool had to settle for a 2-2 draw at home to Sevilla on Wednesday, with their defensive shortcomings exposed yet again.

The German was preferred to Simon Mignolet, and he was a spectator for a large chunk of proceedings.

He could do nothing about either of Sevilla’s goals, and his kicking was far less nervy than against Arsenal last month. Not an easy night to grade him.

Brought in for Trent Alexander-Arnold, Gomez was a solid presence at right-back, defending better than some of his more experienced teammates.

The 20-year-old also offered some threat going forward, going to show he is not too limited in that.

Progressing all the time, but a sloppy late sending off was blot on his copybook.

You have to feel slightly sorry for Matip, who is often a fairly blameless presence in a horribly erratic back-line.

He played well against Sevilla, exuding calm on the ball, winning aerial battles and even pushing forward on one occasion.

There were a few errors of his own thrown in, though, in particular a horrible sliced clearance.

Lovren isn’t good enough, it really is that simple.

The Croatian can be overly-criticised at times, but he makes mistake after mistake, and that was horribly evident at Anfield.

His atrocious attempt at a clearance allowed Wissam Ben Yedder to open the scoring, and he looked erratic throughout. A wayward late pass into the crowd summed up his night.

After a horror show against his former club in the Europa League final last year, Moreno showed great heart and produced an impressive performance.

A constant attacking outlet down the left, his inch-perfect cross allowed Roberto Firmino to equalise and he defended better in general, too.

A poor night for the Liverpool skipper, who at times tried too hard to stamp his authority on the game. His passing felt rushed and hopeful, and the more the match went on, the more his lack of composure became apparent.

His energy and defensive work were important on occasions, however, and he played a key role in Firmino’s goal.

The 23-year-old has had a good start to the season, and he was solid in the Reds’ Champions League group stage opener.

A well-struck early effort was saved by Sergio Rico and he also shot inches wide before half-time, and his box-to-box quality came to the fore more often than not.

Poor for Sevilla’s goal, though, and will have better nights in a Liverpool shirt.

Wijnaldum can either be influential or invisible – fortunately, he was the former on Wednesday night after being the latter last time out.

His energy helped Liverpool boss the midfield battle for large chunks, and he also oozed class on the ball and responded well to a terrible showing at Man City.

The best of the midfield trio, but another who faded in the second half.

Salah was again guilty of being slightly loose with the ball, but he carried an enormous threat all night long.

Quick, direct, skilful and intelligent – he also got a trademark ugly goals thanks to a huge deflection off a Sevilla man.

He is only going to improve, and will mature into a sensational signing.

Mane looks unplayable at the moment, with defenders powerless to do anything about him.

Every time the ball was at his feet you could feel a buzz within the crowd, and he won the penalty that Firmino hit the post with.

Quieter in the second-half, which was frustrating, but Liverpool’s best player.

Mane and Salah caught the eye more, but Firmino once again led the line well for Liverpool.

Everything the Brazilian did felt thoughtful and classy, and he scored a crucial equaliser from close-range, outlining his improving predatory instincts.

Missed his spot-kick, which was a shame, and it ultimately proved very costly.

Looked very rusty on his return to the team, losing the ball a couple of times.

Did nothing of note, but used the ball well when he had it.

An energetic cameo, but not on for long enough to give a rating.

The Liverpool manager went with the same midfield and attack that started against City, and he got a very good first-half display out of his side.

They seemed to run out of steam after the break, though, and it could be argued that making so few changes was an error, in hindsight.

He couldn’t do too much about yet more individual errors – apart from ensuring a competent centre-back was signed in the summer.