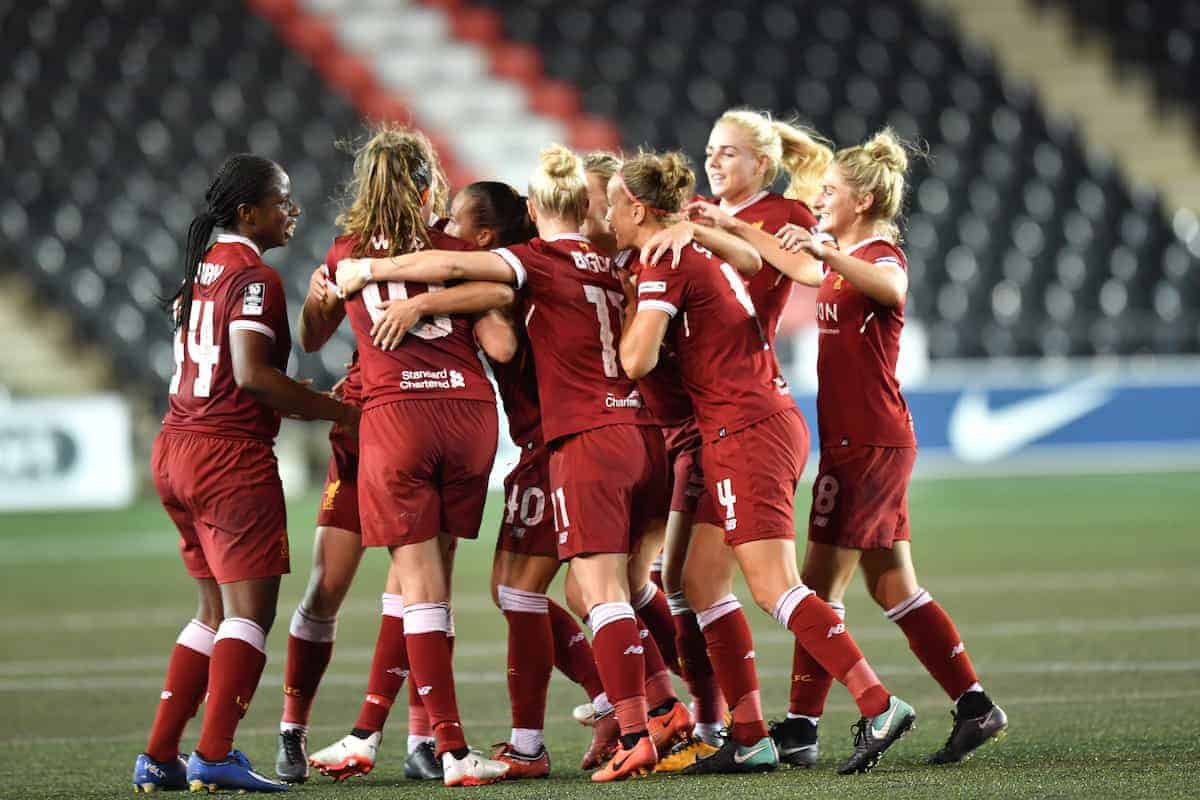 Liverpool Ladies captain Gemma Bonner was encouraged by her side’s performance in their 2-0 victory over Everton on Friday night.

The two Merseyside teams went head-to-head on the first evening of the Women’s Super League season.

Everton had not played in the top tier since their relegation in 2014 so Liverpool went into the derby as favourites to come away with a win.

Goals from Natasha Harding and Niamh Charles helped the Reds record a fairly comfortable victory and Bonner was pleased with what she saw.

“Coming away with three points from a derby win, we couldn’t be happier,” Bonner told This Is Anfield.

“We knew Everton would be a good side and we expected a tough test. I’m sure they will cause teams a lot of problems this season.

“We got those two goals in the second-half eventually and that was enough to give us the win but we probably could have gone on and got a few more.

“Everton did everything they could to try and disrupt us but we dealt with it in the end and got the job done.

“It’s the first game but it is good that we’re creating chances. We knew we could get there in the second-half so credit to the girls for sticking to the game plan.” Charles, 18, scored her first goal for Liverpool during the 2-0 win after coming on as a second-half substitute.

She won the club’s Young Player of the Year award for 2017 and has been tipped to enjoy another successful season.

Bonner was joined in praising the influence of the youngster by Liverpool manager Scott Rogers, who has urged caution over her development.

“Niamh (Charles) is a great kid and everyone has already seen a lot from her in the Spring Series,” said Bonner.

“She came on and got her goal and I think you could see by the reaction from the players how happy we all were.

“She thoroughly deserved it.”

Rogers was “delighted” to see Charles finally get her name on the score-sheet but he stated the club need to make sure they nurture her talent in the right way.

“The contribution from the substitutions that came on and the overall performance from the team was fantastic,” Rogers told This Is Anfield.

“I am delighted for her (Charles). It has been coming for a long time. She wants to score lots of goals and in training she is doing it all the time.

“For whatever reason, it just wasn’t coming off in the games so hopefully this goal will set her off on a little run.

“We have to be on the side of caution. She is only 18 and she is very talented so we need to nurture that properly.

“I do believe she will go on to play for England but we have to make sure we help her in the right direction.”

As well as praise for Charles, the Liverpool manager singled out left-back Alex Greenwood as a stand-out performer.

“Alex Greenwood played really well but it was a team effort and I think every player on the pitch put in a good performance,” said Rogers.

“Everybody knows what assets Alex has. She’s technically very good and her left-foot is like a wand. She brings a lot to our game.

Liverpool Ladies are back in action on Friday when they take on Reading at the Select Security Stadium in Halton.

Reading lost their season opener against Sunderland as Simona Koren scored after six minutes of her debut to secure a 1-0 win.