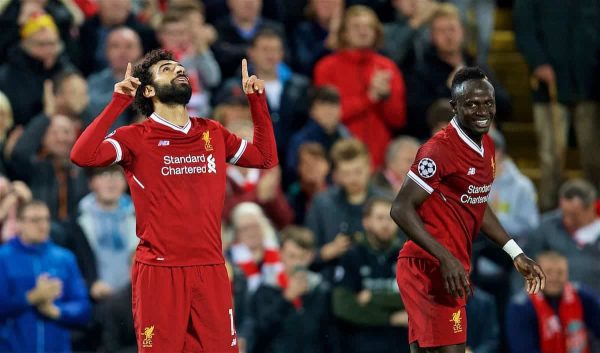 The Reds make the 3,200-mile round trip to Moscow looking to get the Champions League campaign up and running.

Klopp’s side arrive with increased confidence after earning a much-needed three points at Leicester, and will have to build on that stabilising victory to claim a first group stage success.

Character as well as composure will be needed in what will be an intense atmosphere to claim a priceless win, and begin taking a controlling position in Group E.

Klopp has a strong squad available to set his team to do just that in Moscow, where Mane is poised to make an instant comeback in what could be a very exciting Reds lineup.

Klopp and his players will be desperate for a first group stage victory in Moscow after being denied by Sevilla at Anfield.

Tuesday’s game may not quite be ‘must win’ coming so early in the campaign, but it’s one the Reds undoubtedly need victory from to keep ambitions of reaching the knockout stage firmly on track.

Klopp will know full well the potential boost a win would provide, and he could field an all-out-attack lineup to give his side the best chance of earning what would be a priceless three points.

All the Reds’ best offensive options are available with Mane now back, and Klopp will be just as excited as Kopites about them finally being able to start together – which could happen for the first time in Russia.

Indeed, Philippe Coutinho, Mohamed Salah, Mane and Roberto Firmino could all feature from the off to provide maximum creativity and goal threat.

Salah and Mane would flank Firmino in attack, with Coutinho supplying the devastating trio from a deeper position in midfield, where he would join Emre Can and Jordan Henderson.

The latter pair can focus on winning the midfield battle and protecting a defence which will again boast changes, with Karius and Alexander-Arnold to join Joel Matip, Dejan Lovren and Alberto Moreno.

This exciting selection would see Liverpool lineup like so:

The wealth and quality of attacking options at Klopp’s disposal makes such an adventurous approach likely for the second group match.

At the same time, this welcome depth also hands the German the chance to vary selection slightly without compromising the attacking out-look as Liverpool look to take the game to Spartak.

One alteration in the front three could see Sturridge – who impressed in a sharp cameo at Leicester, setting up Henderson’s winner – enter to lead the line to give out-of-sorts Firmino a break.

The midfield trio should be kept the same with this arguably the strongest Liverpool have, but another switch could come in defence alongside Karius and Alexander-Arnold.

Robertson has impressed in every outing since arriving at Anfield, and has shown enough both offensively and defensively to be chosen over Moreno and handed a Champions League debut.

A similarly exciting but slightly changed lineup would see this XI start at the Otkrytiye Arena:

The Reds were denied the dream return to Europe’s elite stage by Sevilla, but Klopp’s men must ensure victory arrives in Russia to get the European season up and running.