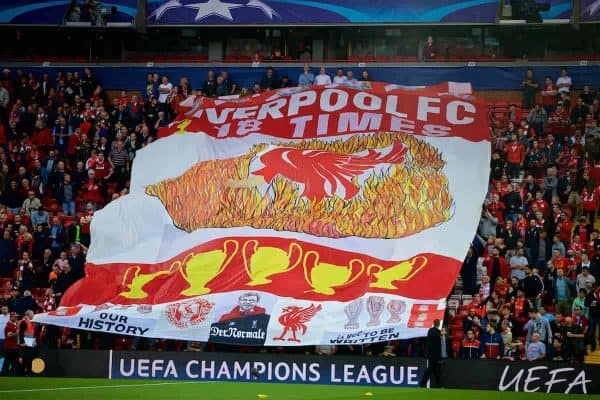 Reds out for revenge in Champions League opener – Liverpool vs. Sevilla Preview

Liverpool make their return to the Champions League proper on Wednesday night, with Spanish side Sevilla arriving at Anfield for the group stage opener.

After dispatching of a dangerous Hoffenheim side over two legs last month, the real Champions League now begins.

Ironically, the first visitors are the side who denied Jurgen Klopp‘s side a place in last year’s Champions League, with the Europa League final defeat 16 months ago in Basel.

Revenge will be the order of the day at Anfield on Wednesday, but getting three points on the board early is the priority.

The Reds have to respond after Saturday’s haunting 5-0 defeat at Man City, and the hope is we see a performance similar in dominance to the last two home games, against Hoffenheim and Arsenal.

It’s the first Champions League group stage match at Anfield since December 2014 – when Steven Gerrard and Rickie Lambert lined up up front, and Jose Enrique at left-back.

Philippe Coutinho looks set to play a part, having missed the thrashing at City.

It is not yet known if the Brazilian will start, but with Gini Wijnaldum looking jaded and struggling for form, it would be a wise move.

Mohamed Salah didn’t take part in training in Tuesday afternoon because of illness, but should be in contention.

Loris Karius will replace Simon Mignolet in goal, as looks to be the case in the Champions League this season, while Dejan Lovren should come in for Ragnar Klavan.

Trent Alexander-Arnold may be replaced at right-back by Joe Gomez, following a bad day at the Etihad.

Sevilla are without former City wide man Nolito, with the Spaniard suffering from a thigh problem, and midfielder Johannes Geis is also missing.

Sevilla have been one of La Liga’s most prominent sides throughout much of the 21st century, and three Europa League crowns in succession, in 2013/14, 2014/15 and 2015/16, speak volumes about their quality.

Eduardo Berizzo took charge in May, replacing current Argentina manager Jorge Sampaoli, and seven points from a possible nine is a solid start to their league campaign.

Like Liverpool, los Rojiblancos had to overcome a qualifier to reach the group stages, with Berizzo’s men prevailing 4-3 on aggregate against Istanbul Basaksehir.

Sevilla aren’t quite the force they were when they saw off the Reds in impressive fashion last year, but there is still an abundance of quality within the squad.

Sergio Rico is a talented goalkeeper and Simon Kjaer and Gabriel Mercado are strong defenders, while Ever Banega remains a superb central midfielder who makes Sevilla tick.

Ganso is also an interesting player to watch, with the eight-time capped Brazil international a mercurial talent who can hurt teams on his day.

Former Stoke enforcer Steven N’Zonzi has matured into one of his side’s key men, and Wissam Ben Yedder has made a flying start to the season, scoring three times in four matches.

For the full lowdown on Sevilla, read Karl Matchett’s assessment of the La Liga outfit HERE.

Joe Gomez and his manager were on press conference duty on Tuesday, with the young defender speaking of his excitement at playing Champions League football:

“That’s what you aspire for [when] you come to a club like this. It’s the level that everyone knows the club should be at and playing at,” he said.

“For me, personally, it’s something I’ve always dreamed of as a kid and just to be part of the club going into a competition like this is special.

“Champions League nights are always special, especially at Anfield. So hopefully it’s the start of a good campaign for us.

“I think it’ll have a different feel because it’s the start of the group stage and we know that it’s a massive game – we’re actually in the Champions League now.

“I think it’s going to be a great atmosphere and hopefully it’ll be a good result as well.”

Out matchday live blog will also be available from 7pm, with Ben Twelves hoping to talk you through a more positive 90 minutes than Saturday.