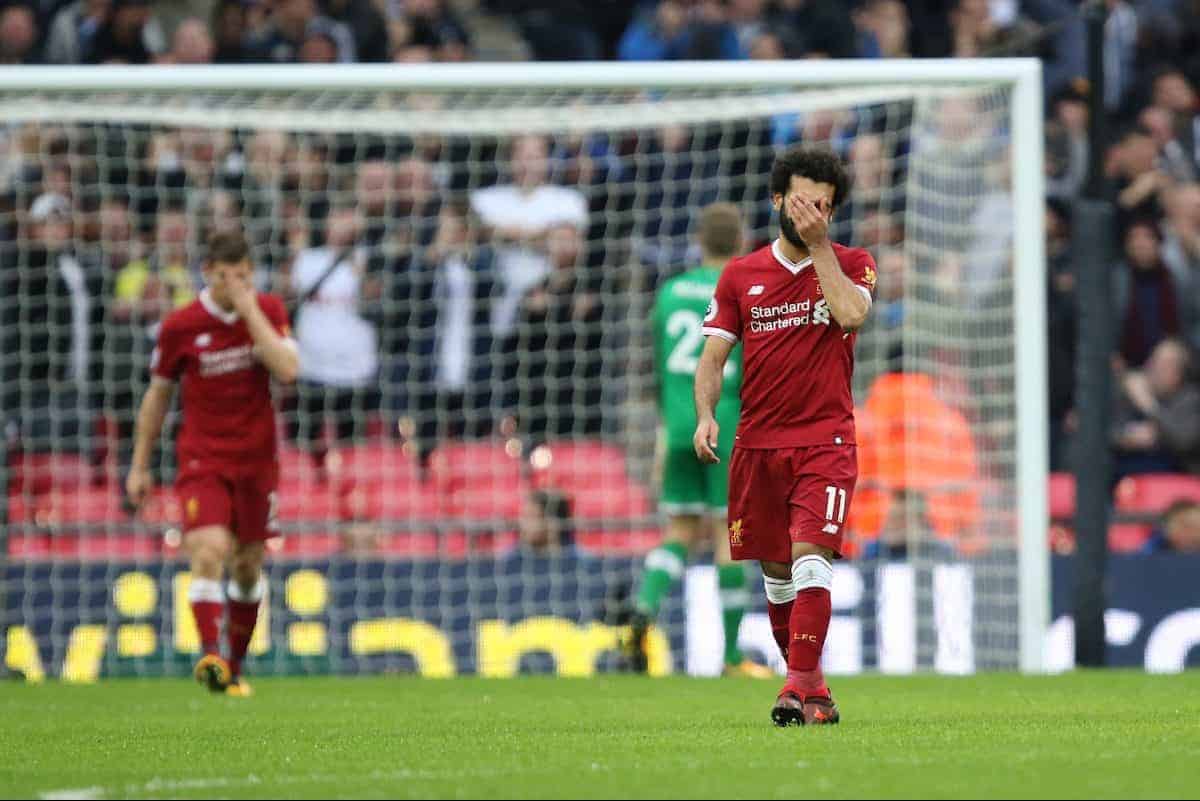 Liverpool supporters were left fuming as Jurgen Klopp‘s side fell to a miserable 4-1 defeat away to top-four rivals Tottenham on Sunday afternoon.

A brace from Harry Kane and goals from former Reds targets Heung-min Son and Dele Alli consigned the visitors to a dismal loss, with Mohamed Salah‘s first-half strike a mere consolation.

After an encouraging 0-0 draw with Man United, and an excellent 7-0 win away to Maribor, Sunday’s clash could have given Liverpool an extra boost as they looked to turn around a poor run.

Ultimately, their victory in the Champions League proved to be an anomaly, with Klopp’s side now having taken all three points just two times in their last 10 outings.

Fans were pleased to see Milner keep his place…

Actually so happy Milner and Hendo are starting

Glad to see Milner get the nod work horse and can use his intelligence and experience in the match ?? #LFC

“Milner keeps his place and deservedly so. Alongside Hendo and Can, that’s a strong midfield behind our 3 attacking gems.”

Kane scored due to some awful defending on four minutes…

Lovren manages to not mark, not react, not track and not tackle. Impressive indeed. Matip and Mignolet (less so, tried) also not great.

“Lovren looked like he’d just been woken up. Pathetic defending.”

Piss poor. Mignolet is abysmal off his line

If you think Lovren is a good player you're an idiot.

“We honestly would be better off with Gomez at the back. The lad will make mistakes as he learns, but Lovren is just a calamity game after game.”

What an 11 minutes and 20 seconds of football that is from Liverpool's Dejan Lovren. Mesmerising.

“Really good ball from Hendo. Classic Salah finish – untidy and scruffy but it goes in!”

Loris as bad as Mignolet there. Scrappy finish but I'll take it.

Klopp was praised when Lovren was subbed on the half-hour…

Whatever happens now, I'll have massive respect to Juergen for giving Lovren the hook

Nobody on the LFC bench wants to speak to Dejan.

How embarrassing. Starting CB getting the hook after 30 mins. I wonder if they'll pretend he's injured.

“Is that the moment Klopp finally woke up to how shit Lovren actually is.”

That should be Lovren's last game for the club.

You can't blame everything on Lovren.

Mignolet was at fault for Kane’s second…

Is there room for Mignolet next to Lovren on the bench?

Mignolet and Lovren have survived far too long.

“We need to go out in January and spend big money on a goal keeper and two centre backs.

Everything else is fine. But we’re going into boxing matches with one hand tied behind our backs.”

A catalogue of errors? Try a compendium.

And frustration reigned as full-time brought a 4-1 loss…

Sum that game up with a gif time.. pic.twitter.com/uz9dHxUer1

“Every good aspect Liverpool had last season has gone. Can’t beat the top sides now, 5-0 against City, 4-1 against Spurs and say what you want, but we still never beat United.”

I can take losing away to Spurs, but when all four goals conceded are completely self-inflicted – that's unacceptable! Shocking defending

Angriest I've been watching Liverpool for some time. Mostly because we lost our identity & same culprits like Lovren & Mignolet costing us.

“Out played by a good team.
Harry Kane was unplayable.
Bored, Tired and frustrated by seeing the same mistakes every week.
This is not the Liverpool way.
Clear the garbage and make some ruthless decision Klopp.”

There's lots to love about this LFC side but I'm so sick of the same individuals costing us. Beyond unforgivable not to upgrade at the back.

“I don’t know what’s worse. Listening to Gary Neville commentating or watching that performance, but what I will say is Neville is 100% right. How is that goalkeeper and those defenders still at that football club? Wouldn’t happen at any other top club.”

We need a lot of investment in this team, only 2 of our 11 players would get into this Spurs team #Salah #Coutinho

Nevermind. I'm sure in a couple of days the club will bring out a hilarious video to satisfy our worldwide customer base.

When you watch Liverpool play. pic.twitter.com/bBBdhW03Rq