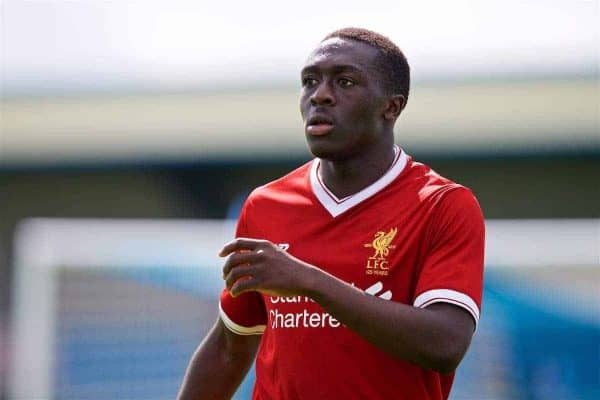 Bobby Adekanye: Who is Liverpool’s former Ajax and Barcelona winger?

Facing a defining campaign with the U23s, Netherlands youth winger Bobby Adekanye is the latest in our series of Liverpool FC academy profiles.

But for Habeeb Omobolaji Adekanye, nicknamed Bobby, moving from country to country, city to city and club to club has been a part of growing up.

A Valentine’s Day baby, Adekanye was initially brought up in his native Nigeria, before moving to Amsterdam with his family at the age of four, joining the youth ranks at Ajax.

But just after his 12th birthday, he had moved on again, this time snapped up by Barcelona, swapping one fabled academy for another to arrive at La Masia.

In 2014, however, Adekanye’s journey to Barcelona came under investigation from FIFA—along with that of nine other youngsters—with the Spanish side ultimately banned from signing players until the start of 2016.

Adekanye was unable to play for his new club, even at youth level, and joined PSV Eindhoven on loan for the 2014/15 campaign, with his performances sparking Liverpool’s interest.

The Reds fended off competition from both PSV and Ajax to secure Adekanye on a long-term deal in 2015.

His tribulations weren’t over there, however, as the winger was forced to wait until three months into the campaign before he was granted international clearance for competitive games.

From there, Adekanye was free to link up with Neil Critchley‘s Liverpool U18s on a regular basis, with his move to Merseyside met with anticipation, following comparisons with his countryman, Arjen Robben.

Like Robben, Adekanye is a diminutive wide talent capable of operating on either flank, adept at driving at opposition full-backs, beating them with skill and testing goalkeepers from range.

He is something of a foul-magnet, with his pace and ability to glide past players proving frustrating for defenders, but he has the focus and mentality to persevere.

Adekanye is arguably at his best on the right, as a natural left-footer, but his versatility is invaluable.

His potential has already been recognised by Pepijn Lijnders, the Reds’ elite development coach, and he has trained as part of Jurgen Klopp‘s first-team squad at Melwood.

“If you want to be the best, learn from the best,” Adekanye told his Twitter followers at the end of 2016.

However, Adekanye is yet to truly establish himself at either U18 or U23 level for the Reds, with injury issues hampering his progress under Critchley.

After being granted his work permit towards the start of 2015/16, he was then sidelined with an ankle injury that kept him out for three months.

A similar problem picked up while on duty with the Netherlands U17s saw him ruled out again just two months later, remaining on the treatment table for the rest of his first season at Kirkby.

Then, last term, he made 19 appearances in the U18 Premier League, averaging just over an hour on the pitch per game and scoring just once, as Critchley took a cautious approach to his development.

His standing in the academy has not diminished, however, with Critchley looking to integrate him with the U23s this season.

Adekanye will also remain part of Steven Gerrard’s U19s squad for the UEFA Youth League, with his experience on the continent with Ajax, PSV and Barcelona useful for the ex-Reds captain.

Given the depth in Liverpool’s youth ranks out wide, including the likes of Ben Woodburn, Harry Wilson and Yan Dhanda—and with both Danny Ings and Lazar Markovic dropping down too—his chances may be limited.

But after a stalled start to life on Merseyside, Adekanye can set his sights on a slow rise in the safe hands of Critchley and Gerrard.

The hope will be that, after a career spent on the road so far, Adekanye can settle and fulfil his potential at Liverpool.