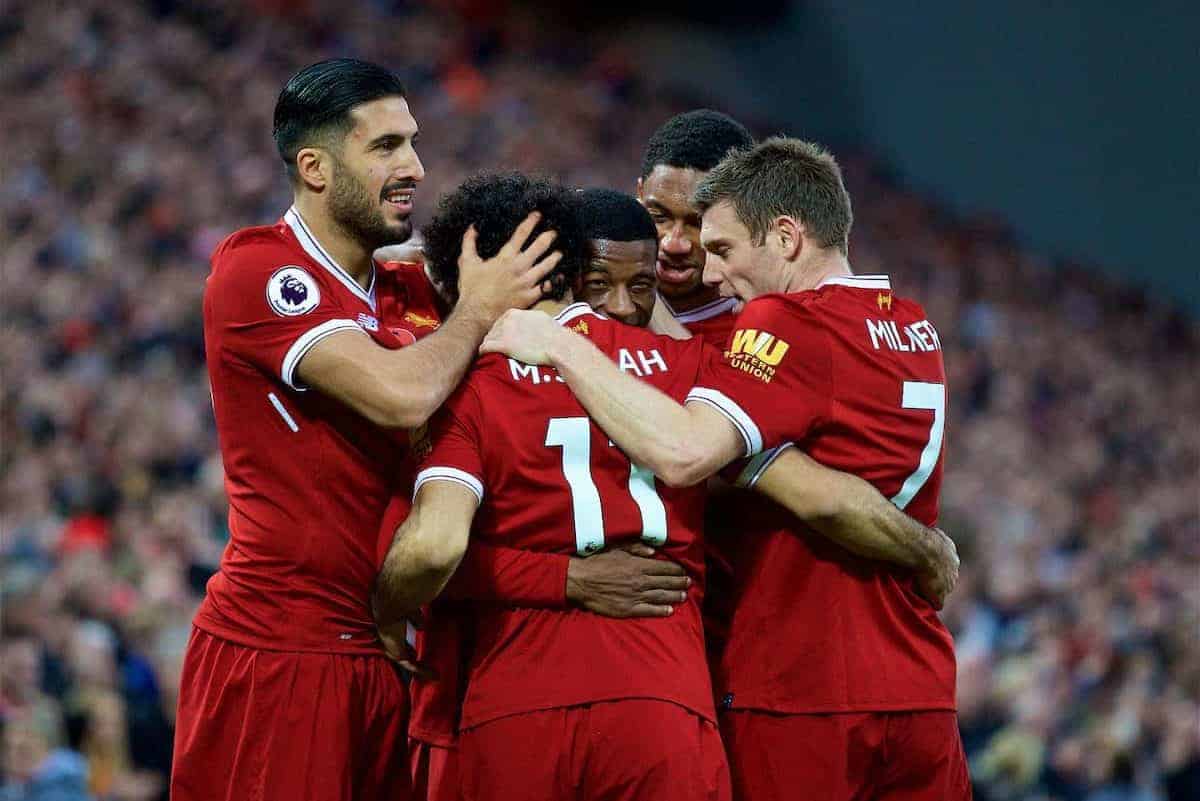 Liverpool secured a vital 3-0 win at home to Huddersfield Town on Saturday afternoon, providing supporters with a welcome relief.

After the indignity of their 4-1 loss away to Tottenham the previous weekend, Liverpool needed an uplifting result as they welcomed newly promoted Huddersfield to Anfield.

Jurgen Klopp‘s side took their time to shift into gear, and Mohamed Salah‘s first-half penalty miss was a blow, but they ultimately dominated proceedings.

Here’s how supporters reacted to Liverpool’s 3-0 win at home to Huddersfield on Twitter, Facebook and our forums.

Lovren injured, but his replacement being Klavan. pic.twitter.com/6JEa75P6oq

Salah disappointed from the penalty spot…

Poor penalty from Salah really. Saved by Lossl. Neither down the middle nor to the corner.

I love Salah but he's as ruthless as marshmallow. Meanwhile James Milner, who rarely ever misses from the spot, watches on. Fucking joke.

The only thing Milner is good at, and we let Salah take the penalty

Why can’t Milner take the penalties???

Spirits were low at half-time…

“Best part of the game was the halftime whistle…sadly.”

This is finishing 0-0. Klopp will make his changes in the 87th min, when it’s a foregone conclusion

Sturridge got the second half off to the perfect start…

Yes Daniel Sturridge! Put the deflected ball by Moreno behind the net and made it look so easy. Great technique there to bend and lob it.

Such a calm finish by Studge. Yes it's fortunate that Huddersfield headed it back into his path but Daniel is often alert to these errors.

– boston red on the forums.

“If ever the phrase “Game of Two Halves” was applicable…”

– Kanonkop on the forums.

LIVERPOOL SCORE FROM A CORNER KLAXON!!!!

Before Wijnaldum grabbed his first goal of the season…

Very much like his goal against Boro last season. WIJNALDUM!

And full-time saw relief ring round an elated Anfield…

Crucial win and a really good second-half performance. Klopp clearly gave them a bollocking at half-time.

Dire first but redemptive second. Nervy going for a while there, though.

Was an embarrassing first half but thank fuck we won in the end. Second half much better with a little help from Huddersfield!

“Very good win for us, after a stuttering first half. A clean sheet again, without conceding one single clear cut chance to Huddersfield. Satisfying!”

“We are a confidence and momentum driven team, score one and we go on a different gear. Win a couple and our performance continues building upon till stopped. This is good one to build upon now.”

Emphatic win in the end but we need to find that consistency in the league.

“Brilliant second half , Klopp came up with a plan B finally and players executed that which was increasing energy levels and playing long balls in box.”

Sum that game up in a gif time!! #LIVHUD pic.twitter.com/HmzdyHdp08