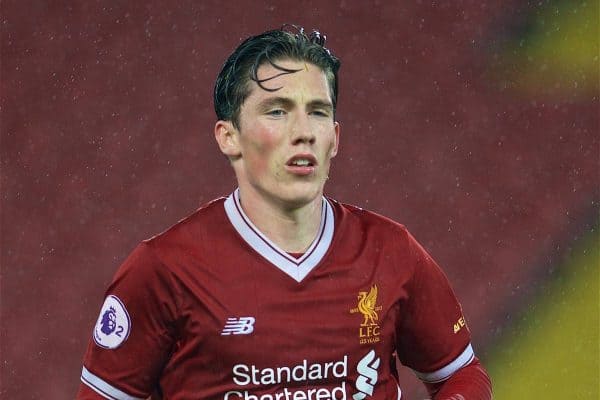 With a thin Liverpool squad returning to Melwood to prepare for Saturday’s clash with Man United, Jurgen Klopp included a host of youngsters.

The Reds reported to Melwood on Monday after a short break, with United’s trip to Anfield set to kick off the weekend’s Premier League action.

However, the majority of Klopp’s senior players are still away on international duty, with the likes of Philippe Coutinho, Georginio Wijnaldum and Dejan Lovren set to return later in the week.

But with the German still overseeing training in West Derby, he was able to give a group of academy talents the opportunity to impress alongside some more experienced faces.

Loris Karius, Joel Matip, Alberto Moreno, James Milner and Lazar Markovic were all present, having either retired from international duty or been left out of their national teams.

Naturally this septet are not unfamiliar with the surroundings at Melwood, having trained there previously.

Nevertheless, their inclusion is a positive step forward as they look to make their mark on Klopp, who has proved his faith in youth over two years at Anfield.

Kelleher, a Republic of Ireland youth international, served as Liverpool’s third goalkeeper on a number of occasions last season, alternating with Kamil Grabara.

And both Masterson and Dhanda were included in Klopp’s squad for a mid-season training camp in La Manga in February, with the 50-year-old enthusing about the young pair while away.

“We needed two players and we decided on Yan and Conor. I know all of the boys and that’s really cool. It’s a good group,” he told the Liverpool Echo.

“They have worked well, really good attitude. Yan and Conor have fitted in well.”

Virtue and Kane are arguably the two least familiar names in the group, with the midfielders largely turning out for the U18s and U23s in recent seasons.

But for Brannagan and Wilson, training at Melwood should come as second nature, with both featuring under Klopp in first-team games already.

However, it must be noted that Brannagan has rarely trained with the senior squad in 2017, having mysteriously dropped down the pecking order after initially being favoured by Klopp.

The 21-year-old is in the final year of his contract with Liverpool, and is expected to leave on a free transfer next summer.

But perhaps, just like his six fellow youngsters at Melwood on Monday, he can impress Klopp once again and carve out a long-term role on Merseyside.