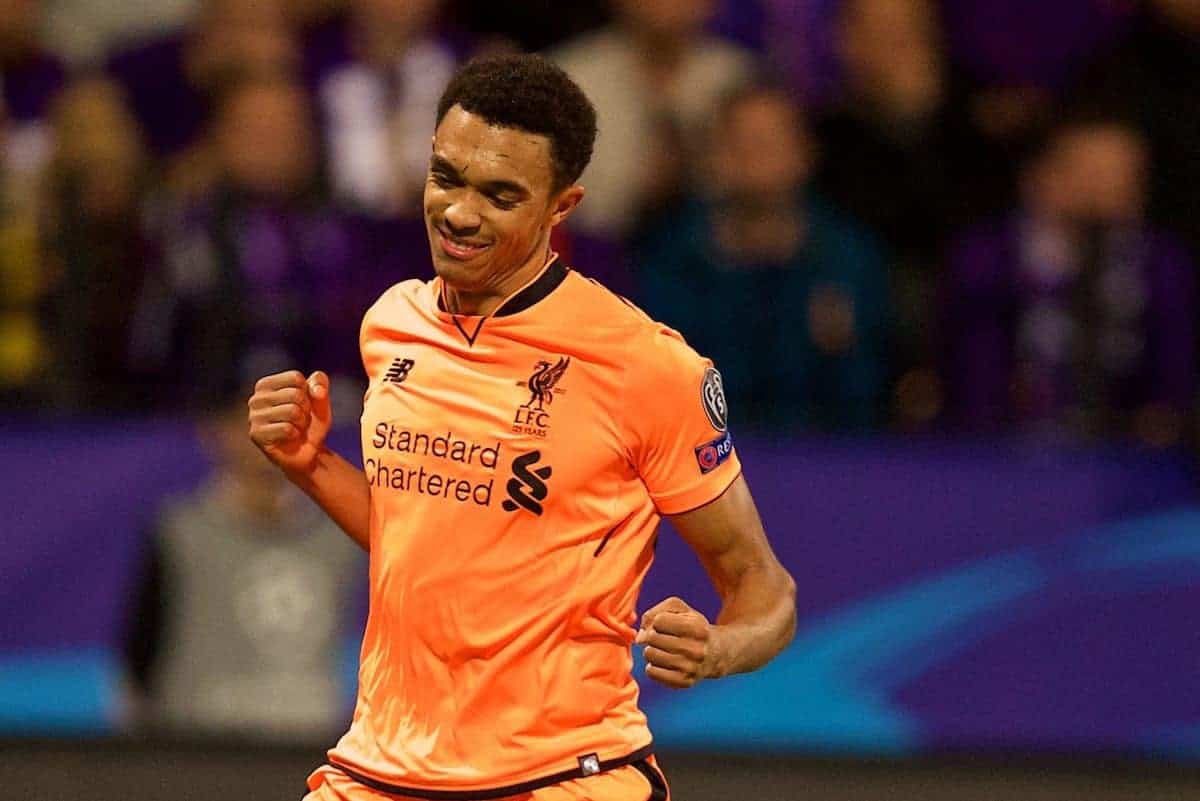 Alexander-Arnold was recalled for the European match and was an influence at both ends of the pitch, scoring the last goal via a deflection and helping keep a clean sheet.

Despite only just turning 19, the right-back already has two goals for the first team, both in Europe, and says the entire side knew they were capable of finding the net more regularly than they have managed recently.

Prior to the game in Slovenia, Liverpool had scored only twice in their last three games and five in the last five—but Alexander-Arnold says homework in the lead-up to the game ensured that barren run ended.

“It was a really, really good win; we came here with a game plan and we executed it perfectly. I think we sent out a statement to the other teams in the group,” the No. 66 told LiverpoolFC.com. “Prior to the game we watched their strengths and also their weaknesses and how we could exploit them, and we tried to stop them playing the way they like to play.

“The whole team knew we had the goals in us. It was just a matter of when and where, and it happened [here] and I think that might be the catalyst to get the ball rolling in the games we have going forward.

“We went full throttle right to the very end and we got the goals that we needed. [The clean sheet is] as important as the goals. If it had been 7-1, it wouldn’t have been a nice result, so everyone did their job.”

Alexander-Arnold also paid tribute to the desire shown by the forwards in the team, with Roberto Firmino and Mohamed Salah both among the goals once more—including the Egyptian’s second goal where both players were on hand to tap in from close range.

“You need those hungry players who just want to score and to have them in abundance in our squad is really good.

“Even though we did kind of put the game to bed really early on, they still had a couple of chances and it was never over until it was over, to be honest.

“Momentum is a really big thing in football. Once you get the ball rolling with the goals and the performances, it’s really hard to stop.

“We might have been disappointed with the result on Saturday but we bounced back [against Maribor] and we showed our talent and we will try to show that again on Sunday.”

Salah himself, meanwhile, suggests that the result shows the Reds have overcome misfortune in recent weeks in front of goal—which should be a platform for future improvement.

“We had bad luck [in the last few matches]. In the last three or four games we missed many chances,” he told BT Sport (per FourFourTwo).

“If you saw the games you know we created many chances that we missed and we had bad luck. Now I think that everyone has confidence that good results are coming, so now we are in a good position and I’m sure in the next games it will be the same.

“The most important thing for us is to concentrate on improving the results in the Premier League.”