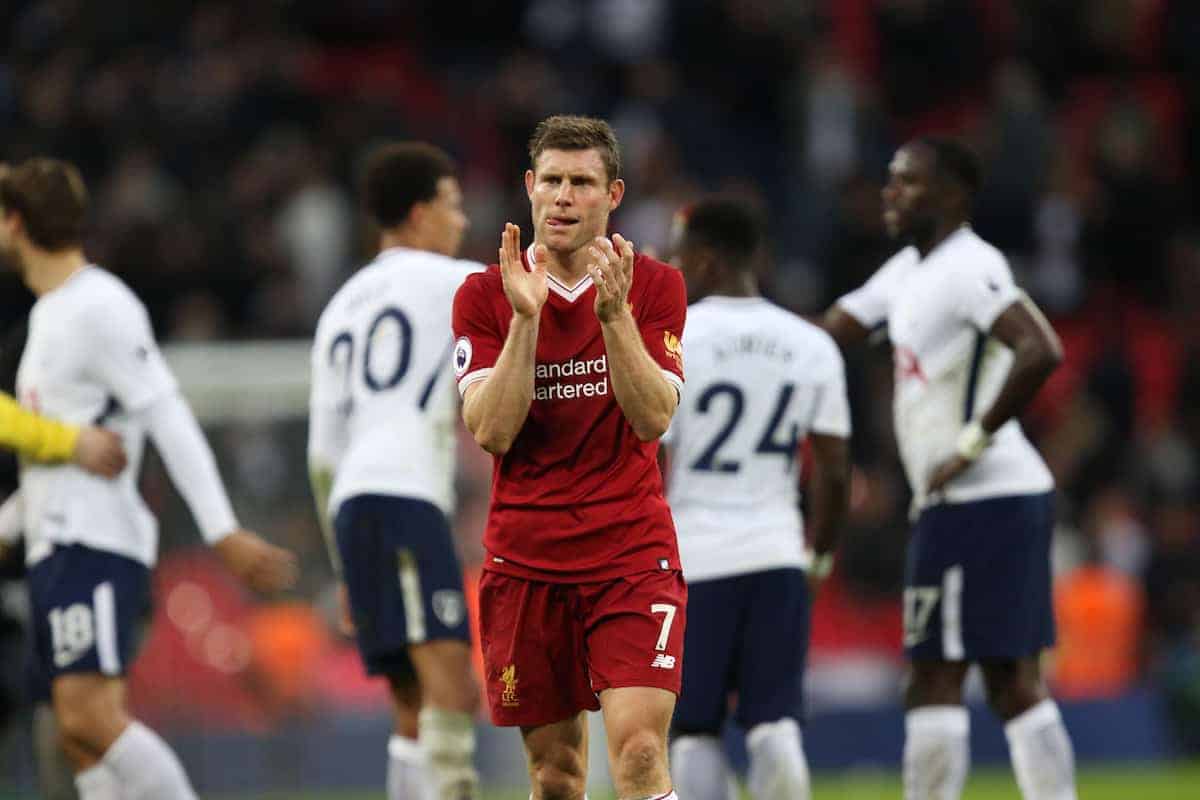 Liverpool suffered a second humiliating Premier League loss of the season, this time at Tottenham where some shambolic defending led to a 4-1 loss.

Back in the team for league duties, the Belgian had a very poor afternoon at Wembley.

Was partly at fault for the first goal as he rushed out and needlessly lunged at Harry Kane’s feet, making it easy for the Spurs forward to score, and he flapped badly at the free-kick swung in for Spurs’ fourth.

Returning to the lineup in one of three outfield changes made by Klopp, Gomez was one of the Reds’ steadier performers at Wembley.

Did a solid job at right-back despite being let down by those directly on his inside, and did relatively well at centre-back considering he was thrown in at the deep end, making a couple of strong blocks.

Will hopefully get a run in his natural centre-back position now, with Lovren having once and for all proved himself inadequate.

The Cameroonian wasn’t quite as bad as his starting centre-back partner, but was still extremely poor at Wembley.

Didn’t cover himself in glory for the first goal as he failed to cover or play to the whistle, and he produced a terrible header straight back into danger for Tottenham’s killer third goal on the stroke of half-time.

Looked a bit more settled alongside Gomez, but showed again that he probably isn’t good enough to be a starting centre-back for Liverpool.

An utterly horrendous afternoon for the Croatian, whose best moment came with his humiliating withdrawal after just 30 minutes.

Abysmal on both the first and second goals as he bizarrely tried to play offside from a throw-in, before woefully misjudging a header as Kane gave him the complete runaround.

One of the worst individual performances seen in a red shirt, and one that should signal the end of his Anfield career.

It’s a testament to Moreno’s improvement that though he was in the back four, the Reds’ shambolic defensive display was little down to the Spaniard.

Showed good awareness to danger at times as he covered round well on a couple of occasions, and also showed a sensible head as he picked and chose his moments to support the attack wisely by making some good overlapping runs.

His crossing was frustratingly wayward, though. The captain made an immediate return to the starting XI as expected, but showed some more of the poor form that has worried fans over his suitability to the deep-lying role.

Spent too much of the game chasing the ball around heedlessly, offering no protection to the defence and doing frustratingly little productive with the ball.

Did produce an outstanding pass to set up Mohamed Salah’s goal, however, but that was about as good as it got. Disappointing lack of leadership when it was needed. Shone in a deep-lying role against Maribor but returned to box-to-box duties at Wembley, where he was part of a non-existent midfield.

Moved to right-back in among the changes that followed Lovren’s withdrawal and was at fault for the third goal—losing the ball before conceding the free-kick from which Dele Alli scored.

Hard to be shoehorned into unfamiliar roles in his defence which boosts his mark, and will be determined to move on from a difficult afternoon.

The vice-captain deservedly kept his place after shining against Maribor, though a knee injury to Gini Wijnaldum made Klopp’s mind up for him in keeping the 31-year-old in the side.

It wasn’t a great afternoon for Milner, though, who worked hard for little reward and was part of a central unit that provided no protection to the back four.

Lacked quality on the ball and his crossing was poor. Probably Liverpool’s best performer on the day—not that it’s saying much.

Always looked a threat with his pace and directness and finished well for his goal—even if the strike was scuffed.

To his credit he kept battling even when the game was gone, having a couple of further chances, one which perhaps he should have scored from a cutback.

The Brazilian has been in great form since completing his full reintegration and, along with Salah, provided a second ray of positivity at Wembley.

Was unlucky to see one effort superbly saved by Hugo Lloris.

Firmino showed signs of returning to his best form against Maribor, but the Brazilian didn’t build on that dazzling showing at Wembley.

Was isolated for large parts and starved of service, which led to him having to drop deep between lines and even into midfield to get on the ball, which is where Firmino’s best work came.

Withdrawn for Sturridge with the game gone.

Entered into the left of the front three after replacing Lovren, and came on in tough circumstances with the Reds already 2-0 down.

Showed good positivity and bravery driving with the ball on the outside on a couple of occasions, and delivered some decent crosses into the box.

Recent displays have been much more positive and it looks like he is finally beginning to settle in at Anfield.

Had a thankless task coming on at 4-1. Won a free-kick but no chance to make an impact.

No time or chance to make an impact with the game done and dusted. A disappointing afternoon for the boss, who will be sick to the back teeth of seeing his side—who have conceded the most away goals in the Premier League—defend so woefully.

Named the team most would have picked, and rightly rewarded Milner for shining against Maribor by keeping him in the XI—even if it was forced by Wijnaldum’s injury, Klopp had options to set up differently.

Showed welcome ruthlessness in withdrawing Lovren from his nightmare and trying to salvage the game which boosts his mark up—the boss can’t be blamed for the Croatian’s costly errors that put his side on the back foot.

But Klopp has to take responsibility for failing to spark any defensive improvement or improve the weak areas of his squad in the summer which continue to derail progress.