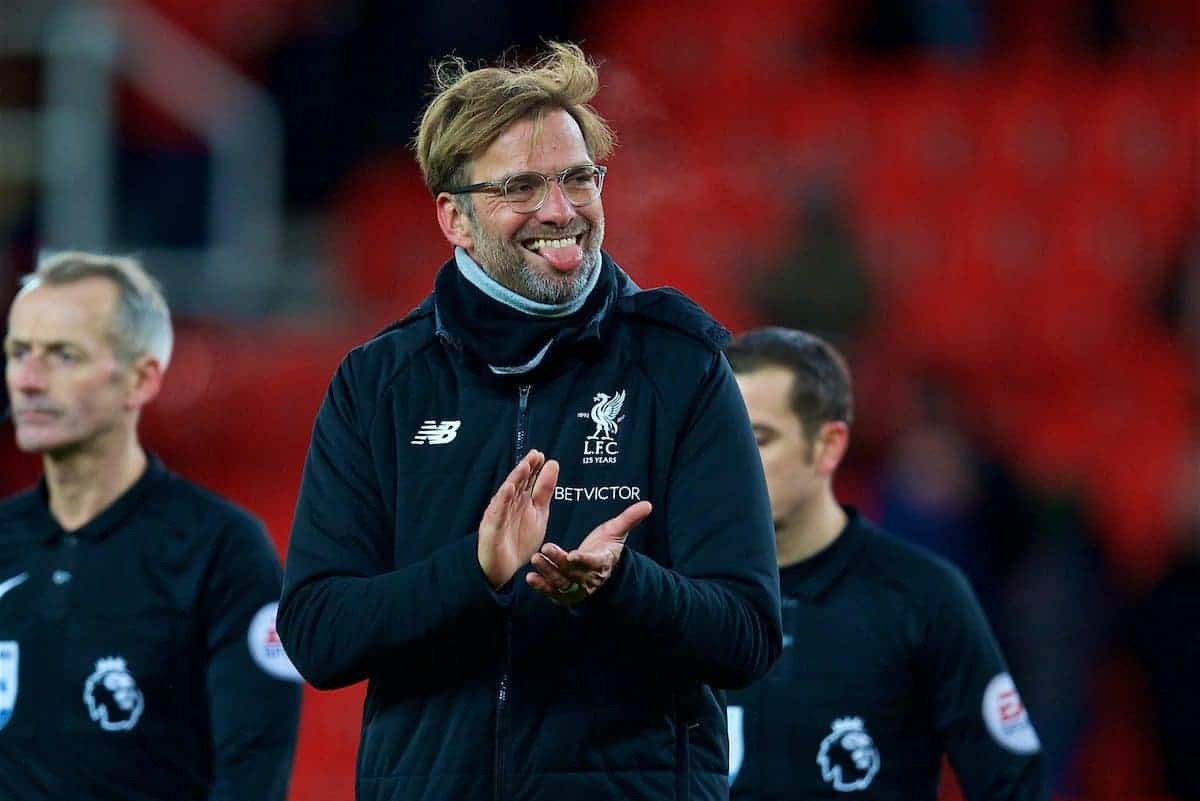 Liverpool head to Brighton in the Premier League on Saturday in the middle of an underrated run of form, following just one defeat in 13 matches.

The Reds won for a fourth time in five Premier League games on Wednesday, as Jurgen Klopp‘s side defeated Stoke City 3-0 at the bet365 Stadium.

It was a good response by Liverpool, after the disappointment of surrendering winning positions against Sevilla and Chelsea, and they leapfrogged Tottenham to move up to fifth in the league.

Next up is Saturday’s trip to Brighton, as the Reds come across one of the most impressive outfits in the division so far this season.

The Seagulls were widely tipped for relegation straight back to the Championship in the summer, but they sit 10th in the table and are playing some good football under Chris Hughton.

The Amex Stadium crowd will want to make the most of Liverpool visiting, so Klopp and his players have to be prepared for a real battle. The likes of Anthony Knockaert and Glenn Murray can hurt them.

Klopp has done a good job of rotating his squad of late, ensuring a freshness remains in his players, and it will be interesting to see his lineup this weekend, with the crucial Champions League clash with Spartak Moscow looming.

The electrifying Mohamed Salah took his goal tally to 17 against Stoke, and his quality alongside his fellow attackers should be too much for a Brighton side that has its limitations.

Liverpool just need to keep ticking along nicely in order to remain right in the top-four hunt. There is little room for error right now.

Nathaniel Clyne remains Klopp’s only long-term injury victim, although Joel Matip is also missing. Ragnar Klavan looks to have recovered from the illness that kept him out of the Stoke game, though.

Adam Lallana didn’t make the matchday squad for that game, but he will hope to be among the substitutes at the Amex. He is not being rushed back, however, which is wise.

Salah and Philippe Coutinho should come back into the team, and Klopp may be tempted to use the duo in a devilish quartet alongside Sadio Mane and Roberto Firmino.

The manager will have one eye on Europe, though, and the recent form of Alex Oxlade-Chamberlain suggests he should be persevered with.

Jordan Henderson and James Milner will hope to come back into the midfield, while both Trent Alexander-Arnold and Andrew Robertson will feel they deserve a run-out at full-back.

Brighton‘s only key absentee is Steve Sidwell, who has been unavailable since September.

Last 5 vs. Brighton (All Competitions)

Away fans’ pubs: “Despite being an impressive stadium, many away fans to visit the Amex stadium feel the location is a downside,” Brighton fan Jamie Packer told This is Anfield.

“Once you get to Falmer station, your only real option for food and drink is at the ground. Therefore, in terms of pre-match drinking, Brighton town centre is your best option, filled with a wide variety of different pubs to visit.

“As you leave the station, pubs such as the Railway Bell are very much Albion pubs.

“Despite being no real designated away pubs, as you walk down Western Road (leading down from the station) pubs/bars such as Wetherspoons, Walkabout, Yates and many more welcome away fans.”

Only one player has made an appearance for both Liverpool and Brighton during the Premier League era—former Reds midfielder Joao Carlos Teixeira, now on loan at Braga from FC Porto.

In his pre-Brighton press conference on Friday, Klopp discussed his rotation policy:

“I don’t discuss too much with [the medical staff]. I have to accept it,” Klopp said.

“That’s of course the first talk, I need to know who’s in the mixup and who I can think about.

“Then I can make the lineup. Every player has to show every day how much he wants to be involved.

“That’s what the players are doing. When they do that [then] it depends on the opponent, the moment, the last game, the break to the next game, a lot of things have an influence.

“The best thing is if you have 24 players to think about. That’s not often the case, [but] so far it’s worked OK.”

The match is not televised in the UK, so do the next best thing and join us on our matchday live blog.

Ben Twelves will be providing you with plenty of content from 2.15pm (GMT), and bringing you minute-by-minute updates during the match. Kickoff is at 3pm.