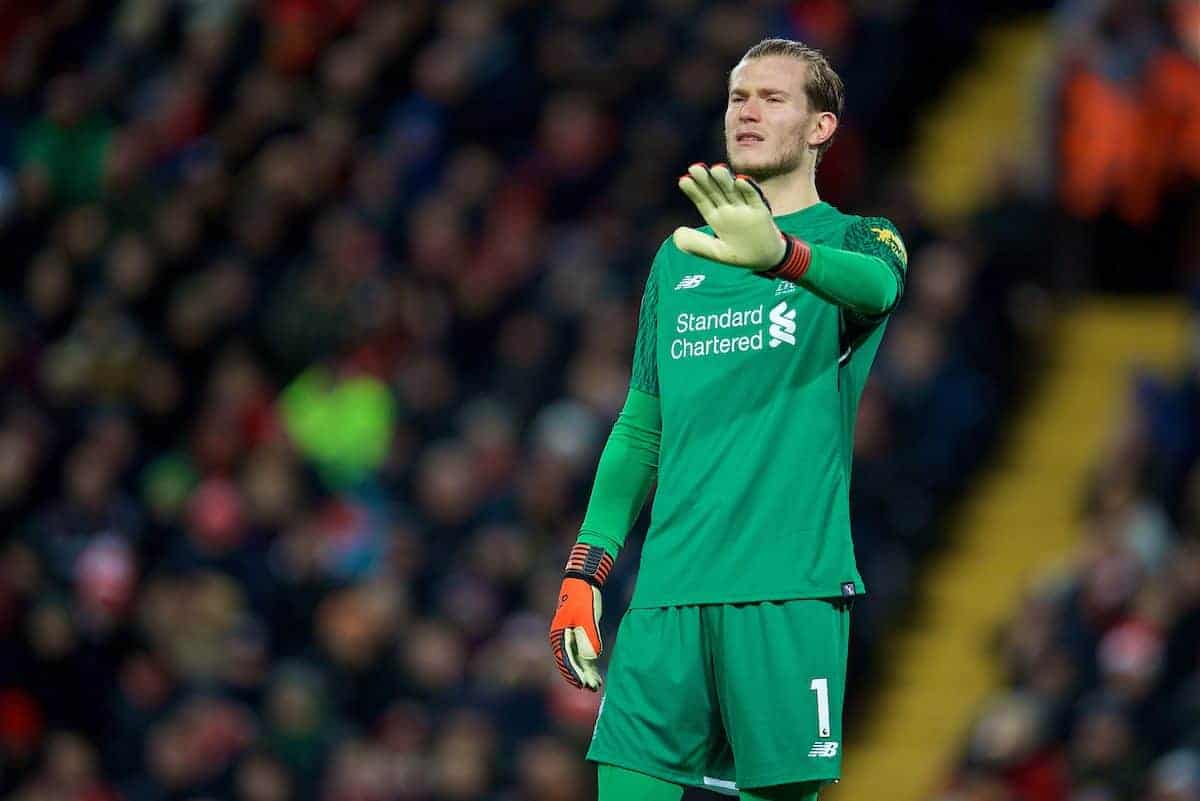 Liverpool hoped this type of display was a thing of the past as they failed to break down West Brom‘s low block, held to a 0-0 draw on Wednesday night.

Made a couple of important saves at the start of the second half, tipping Grzegorz Krychowiak’s cross-turned-shot over the bar, making an even more impressive save from Claudio Yacob at the resulting corner.

He was encouraged by the crowd to release the ball earlier on a number of occasions, which is something Simon Mignolet may have warned him about on nights like this, but his distribution was generally good.

Trent Alexander-Arnold – 7 (Man of the Match)

A strong first half was cancelled out somewhat by a fairly disappointing period in the second which eventually saw him replaced by Joe Gomez.

In the opening 45 minutes he made a nice covering header back to Karius, and showed a willingness to get forward.

One particular cross for Mohamed Salah almost produced a chance but was just ahead of the Egyptian.

He ran into trouble a couple of times, but the adventure was what was needed from others.

A good cross to Salah again was his second-half highlight, but as the tension around the ground increased as Liverpool pushed for a goal, his touch became sloppy and he was taken off. A good early challenge on Salomon Rondon set the tone for his battle with the Venezuelan.

He dealt with things rather than waiting, which on this occasion was a positive.

A good clearing header set up a counter-attack, and a dinked pass into space for Alexander-Arnold also set up a good attacking opportunity.

Did well on the occasions Rondon moved away from Lovren onto his side, and made a couple of good interventions against the strong striker.

One tackle on Jake Livermore in the box was particularly important, but there wasn’t enough of a threat from West Brom for him to feature too highly in the stars of the game, bar a few clearances.

Volleyed a loose ball at goal and though the shot looked to be on target it was deflected behind for a corner.

Looked reluctant to pass to Philippe Coutinho in the first half, almost as if he didn’t know his team-mate’s ability to take a ball under pressure.

Wasn’t quite on the same wavelength at times, but there was the occasional good moment which gave an indication he might grow into the role in Alberto Moreno‘s absence.

A moment very early in the game summed up the Dutchman’s display.

He was through with what would be rare space on the edge of the area from Roberto Firmino‘s flick, but when he should have shot he passed to Sadio Mane who was offside.

His passing was tidy but not adventurous enough, though it was a difficult task given the way the opposition were set up.

Gave away several needless fouls and looked clunky in midfield.

Was careless rather than robust, and though he did win a few good tackles he needed more control in his game in both attack and defence.

Dropped back into defence to deal with Rondon in the second half and looked better for a period, but overall it wasn’t his best display.

Was trying things when others weren’t but perhaps there was too much creative burden on his shoulders.

Those ahead of him were struggling to find space as he dropped into midfield in the second half, but he still almost put Salah through with a delicate chipped pass over the top.

A slow, curling cross through the entire opposition defence found Firmino at the far post but the Brazilian couldn’t divert it goalwards.

Other than this the things he tried didn’t come off, regularly running up dead ends. Was dispossessed six times throughout the game.

This wasn’t all his fault, though, and if a couple of the crosses in his direction had been a few inches closer he could have had at least one goal.

Missed the best chance of the game, skewing his left-footed effort across the face of goal and wide from Salah’s cross.

Didn’t quite have the control on the ball and composure in the area to finish off chances, but to be fair, the rest of these chances were not clear-cut.

Set up Mane for a good opportunity in the second half, but the end result was a familiar story.

It seems that his brilliantly taken volley against Spartak Moscow was the last good touch on the ball he made.

Looks rusty, as if he’s working his way back from injury, when he really should be firing on all cylinders.

His pace was still a threat, but tonight he didn’t have any luck, and his sloppy play meant he couldn’t make any for himself. Provided a different dimension up front and appeared to have scored the winner moments after coming off the bench.

The celebrations were cut short, however, as the linesman disallowed the goal for handball.

The ball hit his arm, but it was not intentional. Unlucky.

Tidy enough with his passing but didn’t influence the game enough either way to warrant a mark out of 10.

Good cross for Solanke for the winner that wasn’t. Tried everything. Played arguably his strongest side available and even used a subtle tactical switch in the second half which saw Can drop into the centre of defence, allowing the full-backs to remain high up the pitch to prevent the West Brom midfielders from breaking forward.

This worked, but it still wasn’t enough and wasn’t really a switch geared at winning the game.

His substitutions looked to have worked perfectly when Gomez crossed for Solanke, but as it was disallowed Klopp probably knew this wasn’t his night.