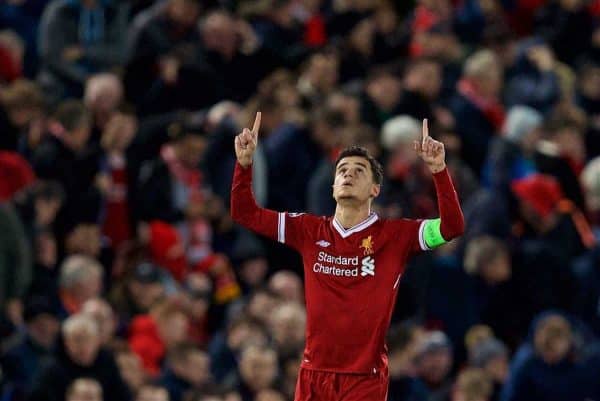 Liverpool secured a place in the Champions League last 16 with an astonishing 7-0 win over Spartak Moscow at Anfield on Wednesday evening.

Liverpool needed just a point to secure qualification from the group stage but a victory would ensure they finished top.

Philippe Coutinho was handed the captain’s armband as he, Emre Can and Georginio Wijnaldum were given the nod to start in midfield, while Jordan Henderson was rested.

Captain Coutinho gave the Reds an early lead when Salah was dragged down in the box and awarded a penalty, which the skipper duly dispatched.

Liverpool were full of momentum and Coutinho quickly doubled the lead following some slick passing play.

Firmino made it 3-0 after just 18 minutes and Liverpool could easily have added more before the half-time break.

Just when you thought things couldn’t get better, Mane scored an absolute screamer within minutes of the restart and Coutinho then bagged his hat-trick three minutes later.

Mane got his second shortly afterwards and Salah joined the party before full-time.

Fans had mixed views on the decision to make Coutinho captain…

“Cant believe its taken four months to bench Hendo. Long may it ‘Coutinho”

“Giving Coutinho the captaincy feels like when they gave Luis the captaincy to see if he would stay but ended up leaving anyways.”

– Francisco Herrera on the forums.

But when he scored two early goals, fans were delighted…

Skipper delivers from the spot. Easy as you like.

Phil was far calmer taking the pen than I was watching him.

Mane then scored that incredible goal and fans were awestruck…

Send help to Anfield, sand bags, barricades anything. This could be any number from Liverpool. #LIVSPA

What a cross by Milner! But the finish??? Goodness me!! MANE!!

Things got even better when Coutinho grabbed his hat-trick…

“Coutinho should be made captain permanently and he must stay!”

Bucket list. Anfield on a Champions League night. The Kip is roaring and the team is breathtaking. #LFC #YNWA

“Quality performance from the lads tonight”

The comradery between our attackers is something to behold. They aren't bothered who scores the goal so long as Liverpool find the back of the net. Not easy to create such an environment.

Jurgen Klopp deserves enormous credit for rotating these four and still getting the job the past few weeks. Now they're all fit and all firing. Great management.

Great performance by @LFC… through to the next round.. #YNWA

“Jurgen the world is watching. Use this to strengthen in Jan. We can be a draw for top players. These players should be defensive ones.”

We've got the best attack in the world! #LFC

Dont care if you're Real Madrid, or if you're Juve, or if you're Bayern. Every single one of them will be shitting their pants at the prospect of facing this front 4.

“Every Liverpool player gets a 10 rating. I can’t criticize anyone. It was a perfect game!”

What a privilege it is to watch this Liverpool team. Enjoy every single minute of this – it's special.

– Norse Dweller on the forums.