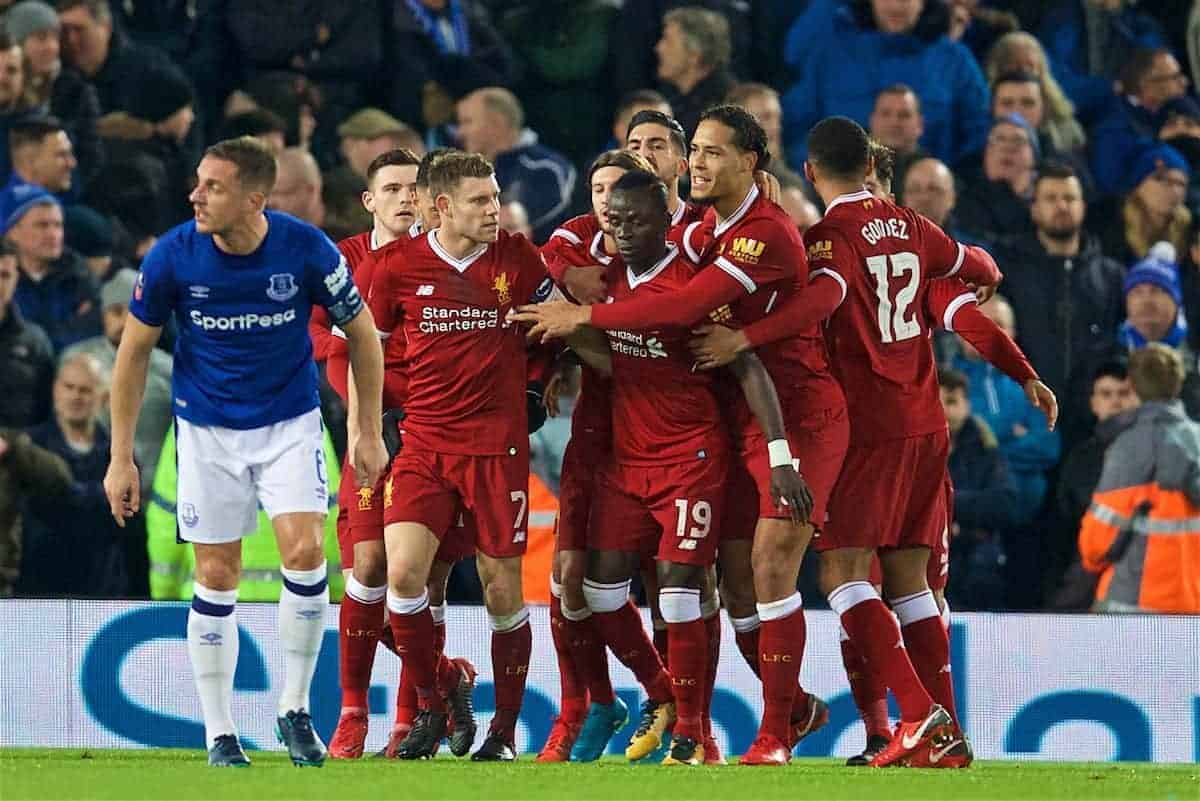 Virgil van Dijk scored the winner on a dream debut against Everton, as Liverpool made it through to the fourth round of the FA Cup with a 2-1 win.

It was a ferocious atmosphere at Anfield on Friday night, as the Reds looked to overcome their local rivals in the 230th Merseyside derby.

James Milner‘s penalty gave the hosts the lead, following a foul on Adam Lallana, but Gylfi Sigurdsson equalised in the second half.

The stage was set for Van Dijk to steal the show, as the Dutchman’s late header sent the home crowd wild.

Great game for robertson, looked really confident and good balance to his game

Really good tonight. Should be appreciated a little more. pic.twitter.com/Bw2OsWMwYm

“How good is Robertson!”

4. Sam Allardyce better pick up all those chewing gum wrappers in the technical area.#LFC

Special mention to Andy Robertson today….MAGNIFICENT at left back ??

Andy Robertson has been class tonight. ?

Van Djik’s winner sent supporters into delirium, on an unforgettable debut for the towering centre-back…

Virgil van Dijk, it just had to be him. What a moment! ? #FACup pic.twitter.com/HnpOow2oex

Yes! Yes! Seventy five million quid goal! Virgil van Dijk at the Kop end on his debut in the derby! 2-1.

Thank you!!!!!! Worth the 75 million alone @VirgilvDijk not many score at the Kop end on their full debut ??? pic.twitter.com/SGI2WXlQWG

DIED AND GONE TO HEAVEN

A header to match Carroll's at Wembley in 2012!

? Virgil on his debut! ? pic.twitter.com/Q8kBi1wvDU

What a great moment to be inside Anfield tonight and see Van Dijk nod home the winner late on debut in front of the Kop against Everton! #LFC

What a debut for Van Dijk, scoring the winner at the Kop end against Everton to knock them out the cup! #LIVEVE pic.twitter.com/VSiG9zcrND

Get in. Van Dijk is an instant hero. What a start to his Liverpool career.

I was in the Kop when Luis Garcia scored against Chelsea in 05 & when Torres scored against Real Madrid & Ngog scored against Man Utd in 09 but not sure those moments match Van Dijk scoring against Everton tonight. Bedlam. Beer & bodies flying everywhere. Football, I love you.

The win was met with universal happiness, as Liverpool move into the next round…

GET IN! Not the greatest performance in the world, but yet another win ground out impressively.

the #narrative was just too good that was amazing

Not the slickest of performances but a win against the blue and white shite is always good. Plus how good were Robertson and Ox? #lfc

Get in there the Redmen???? yessssss

Awful game of football. Game turned into a scrap and LFC won it on points

“The Reds go marching on!!

“Robertson and Gomez were both immaculate. Van Dijk a calm influence, looks like he has played for us for years. Mane seems to have his mojo back.