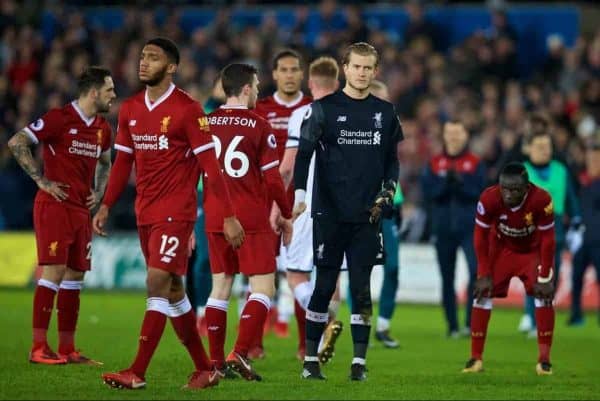 A pathetic Liverpool performance saw them succumb 1-0 to bottom-placed Swansea City, as their 18-game unbeaten run came crashing to a halt.

Lack of Quality on the Bench Proves Crucial

Many supporters have been vocal about the need for new signings this month, but the Reds’ good recent form had allayed fears over a lack of squad depth.

This painfully came to the fore at the Liberty Stadium, however, with just not enough game-changers ready to make an impact from the bench.

The starting players cannot always be the ones to bail Liverpool out in times of need—Mohamed Salah was very quiet, for once—but where was the proven quality in their place?

Adam Lallana did at least make things happen when he came on, but Dominic Solanke has never scored a Premier League goal and Danny Ings has struggled for game time since injury.

The substitutes used have scored a combined two goals this season, which says it all.

Teams who consistently win trophies don’t rely on 13 or 14 players to get you through a whole season—they have 17 or 18 reliable figures with experience and ability in their locker.

New recruits are required between now and deadline day, or Jurgen Klopp risks undoing all of his hard work so far in 2017/18.

A League Debut to Forget For Van Dijk

After a dream Liverpool debut against Everton in the FA Cup, Virgil van Dijk was awarded his league bow for the Reds on Monday night, having missed the 4-3 win over Man City through injury.

The towering centre-back will be a major success story for the Reds, and a potential future captain, but this was not a night he will remember fondly.

He missed a great chance to head the visitors into a first-half lead, and shortly after two skewed clearances led to consecutive Swansea corners.

The second of those set-pieces was not dealt with convincingly by the 26-year-old—he arguably didn’t even need to go for the ball—and Alfie Mawson fired home after getting to the second ball.

It proved to be an ultimately defining moment, and Van Dijk’s failure to clear the danger sufficiently several times was costly.

Had Dejan Lovren done the same, supporters would be prepared to march him out of the club, and it was a below-par display from Liverpool’s record signing.

Wijnaldum Goes Missing on His Travels Yet Again

One of the several man-of-the-match contenders against City last weekend was Gini Wijnaldum, with the Dutchman exceptional in the middle of the park.

There has been much criticism aimed at him in less high-profile away matches, however, and this was another insipid showing on his travels.

Wijnaldum was anonymous against the Swans, offering almost no attacking intent and allowing Van Dijk and Joel Matip to look more creative and ambitious on the ball.

Eventually, he was substituted with 72 minutes on the clock, and it was hard to think of a single positive thing he did all evening.

The 27-year-old is still searching for his first-ever away Premier League goal, which speaks volumes about how anonymous he can be away from Anfield.

He is a very effective player, but few Liverpool players in recent memory have gone into their shell so much against inferior opposition.

Worrying Lack of Composure and Professionalism

The recent victories over Leicester City, Burnley and Everton were so encouraging, with late winners required in every game and a winning mentality starting to emerge.

That all went out of the window against Carlos Carvahal’s side, though.

Rather than play with patience as the minutes ticked down, a complete lack of composure was on display, with erratic shooting and needless fouls both deeply infuriating.

Matip, Van Dijk and Joe Gomez all tried their luck from distance, missing the target every time, while Emre Can skied an acrobat effort late on and Salah shot horribly wide when his team-mates were queuing up.

At no point did this have the feel of Liverpool producing a spirited late comeback, and too many players lost their heads.

In Friday’s press conference, Klopp said “as a Liverpool player you cannot perform one week and then two weeks not—we need to deliver consistently, every day and each game.”

They must now show that this was a one-off.

The departure of Philippe Coutinho left fans feeling disgruntled and concerned, but in the days that followed links to top players saw some optimism return.

The Brazilian’s creativity and ability to conjure up a piece of genius from nowhere was missed hugely on Monday, with one-dimensional football on show against a defensive-minded Swansea outfit.

All this result has done is highlight the need for January business, and as mentioned, no new players this month would be negligent from Klopp.

Liverpool simply have to secure a top-four finish this season in order to keep heading in the right direction, and nights such as these bring concerns over the quality at Klopp’s disposal.

No Champions League football in 2018/19 will see the top names steering well clear of a move to Anfield, and failing to replace Coutinho will feel pivotal.

Last season saw things fall apart at the start of the year—that cannot happen again. Bring in Thomas Lemar, or someone of that ilk.