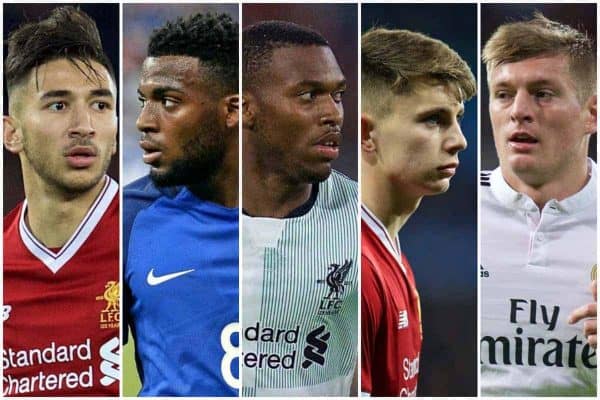 We round up the latest Liverpool transfer news and rumours, as the January window slowly nears its completion and Jurgen Klopp discusses his plans.

The Reds take on Swansea City at the Liberty Stadium on Monday night, with Klopp’s side looking to keep up their current momentum.

Away from the pitch, speculation remains over both incomings and outgoings at Anfield, with supporters eager to see new faces arrive.

Klopp On Reluctance to Replace Coutinho This Month

Liverpool received £142 million from Barcelona for the services of Philippe Coutinho, and fans are willing Klopp to use that money wisely in January.

The manager is never one to panic buy, however, and his recent comments would suggest he is happy to wait until the summer for new recruits.

“Obviously we don’t hesitate to spend the money, we did a few times, but it is not about the moment, it is about making the right decision,” he said.

“If anything obviously right would be there in the window then nobody would not do it and we say, OK, let’s go for it.

“But it is not about doing something to cool the situation down or show the people we don’t sleep. It is only about right or wrong and at this moment in this situation it is right.”

Alexis Sanchez looks set to swap clubs this month, joining Man United from Arsenal with Henrikh Mkhitaryan heading in the other direction.

This is a decision Klopp clearly finds hard to justify, and believes it is a situation he would never find himself in at Liverpool.

“No Liverpool player of this squad would leave to any other Premier League club during the season,” he told the Liverpool Echo.

“It’s how I see the commitment of the players.

“No player is here, and then says ‘OK, come on, in the middle of the season I go there or there’. I really can not see that situation.”

Togetherness is something Klopp sees as crucial in his management, and his comments are interesting, even though he says it is no criticism of Sanchez.

Team spirit is very much the order of the day, and his comments suggest he has created a very happy group of players, perhaps excluding the departed Coutinho.

Marko Grujic has joined Championship outfit Cardiff City on loan until the end of the season, with the Serbian making his debut against Sheffield Wednesday on Saturday evening.

Chances have been few and far between for the 21-year-old at Liverpool since his 2016 arrival from Red Star Belgrade, with just 14 appearances to his name.

Despite this, Klopp has backed the midfielder to enjoy a bright future at Anfield.

“We miss him already in the training group because he developed really in a fantastic way,” Klopp told LiverpoolFC.com.

“But because of the quality we have in the squad, it happened really often that he was not even in the squad. That’s not nice and he needs these 20 games in the Championship. I’m really happy for him.

Thomas Lemar is seen as Liverpool’s primary transfer target this summer, and there have even been rumours linking him with a January switch to Merseyside.

The £90 million-rated Monaco man is reportedly eyeing up a move to Barcelona, however, according to the relatively unreliable Mirror.

Chief football writer Steve Bates claims Lemar “has dashed the hopes of Liverpool and Arsenal by declaring Barcelona his No. 1 destination,” which if true is a big blow.

The 22-year-old would be an excellent replacement for Coutinho, but is the France international set to link up with him at Camp Nou instead?

Sturridge To Replace Dzeko at Roma?

Daniel Sturridge is thought to be keen on a January exit from Liverpool, with the striker wary of missing out on England’s World Cup squad.

A host of clubs have expressed an interest in signing the 28-year-old, and the latest to join the party appear to be Roma, according to Corriere dello Sport.

With star man Edin Dzeko hotly tipped to join Chelsea this month, the Giallorossi will need a top-class replacement brought in.

Sturridge certainly fits the bill, despite constant fitness issues and fears that his best days are behind him, and he could thrive in the slightly slower Serie A.

His time at Anfield looks to be up, bringing an end to five years and plenty of ups and downs at the club, but he deserves to be remembered fondly by supporters.

Ben Woodburn is a footballer of enormous promise, having risen through the academy ranks at Liverpool to become of one of Britain’s most exciting young players.

Sunderland have been linked with signing him on loan until May, but Klopp recently spoke of the Welshman’s importance to the Reds.

The Black Cats don’t seem to be taking no for an answer, however, according to the Star—not the most reliable source.

The report states that Sunderland boss Chris Coleman, who managed the highly rated 18-year-old for Wales, “will try again to capture Woodburn if Liverpool bring in forward signings before the end of January.”

Klopp’s comments about the possibility of no new faces arriving in January makes this very unlikely to happen, and Woodburn may get some chances to shine for the Reds in the next four months.

When discussing the best midfielders in world football right now, Toni Kroos is a player who will always merit a mention.

The three-time Champions League winner is strutting his stuff for Real Madrid, but reports claim he could be tempted to leave the reigning European champions for Liverpool.

According to Don Balon, Kroos “wants to work for Jurgen Klopp” and “believes that he can still improve with Klopp as coach.”

These reports are to be taken with more than a pinch of a salt, particularly given the same publication also claimed the Reds could sign Gareth Bale on Saturday.

The Germany international moving to Anfield would be an unbelievable coup, but history suggests such a high-profile transfer will not materialise.