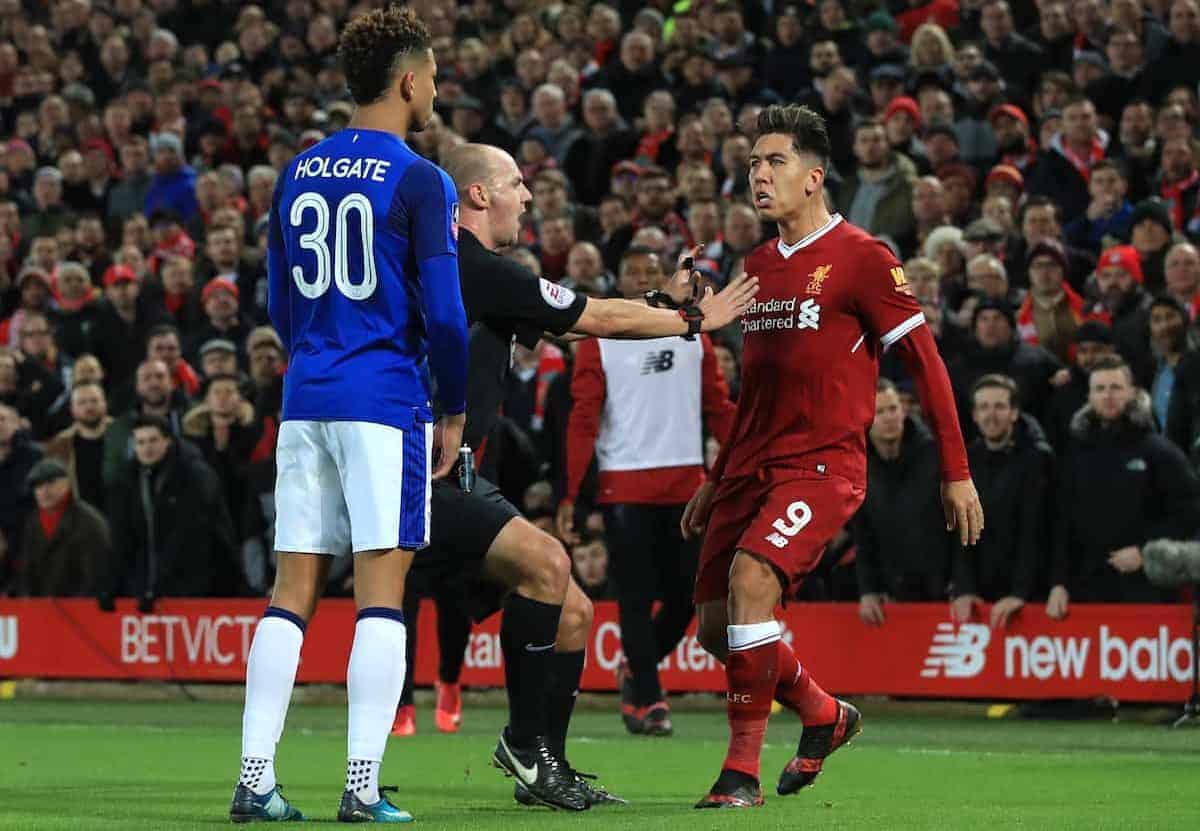 Liverpool have pledged to fully co-operate with any investigation arising out of an incident between forward Roberto Firmino and Everton‘s Mason Holgate during the Reds’ 2-1 FA Cup win at Anfield.

The pair were involved in an angry exchange after the Toffees defender pushed the Brazilian into the front row of the Main Stand and words were exchanged which left the Everton player incensed.

Referee Bobby Madley is expected to refer to the flashpoint in his match report to the Football Association and Liverpool have said they will assist in any way they can should further investigation be required.

“The club and player will fully co-operate with the relevant authorities to ensure the facts are established in a thorough manner if deemed necessary or requested,” said a Liverpool spokesman.

“While that process is ongoing we will not be making any further comment.”

Everton manager Sam Allardyce was asked in his post-match press conference whether the incident was sparked by an alleged racist comment and said:

“I’m telling you nothing until whatever systems are used to find out exactly what happened and what didn’t happen.

“Anything else outside of that that happens has to be dealt with by the authorities.”

Asked whether he has spoken to Holgate, Allardyce added: “I wouldn’t tell anybody in this press conference because it is not about that for me.

“That is in the other areas of the football club so I’ve left that with the director of football (Steve Walsh) and said, ‘sort that out’.”

Walsh was seen in discussion with Everton‘s media team in the Anfield tunnel after Allardyce’s press conference but the club have yet to make a comment.

Press Association Sport understands Firmino was not asked for his view on the incident immediately after the match but is prepared to give a statement to the FA should a request be made.

His manager Jurgen Klopp refused to be drawn on the issue.

“I only heard about something but I can’t say anything about it because so far I couldn’t speak to anybody and I think, from now on, first of all the club will answer,” he said.

“I don’t really know anything about it.

“I misjudged the situation obviously completely, because I thought it was about a Holgate foul.

“In the end there was no foul, no yellow card, nothing. I didn’t get it to be honest – there was a throw-in, was it?

“I didn’t understand the whole situation after the game. I got information that something obviously happened, but I can’t say anything about it.”