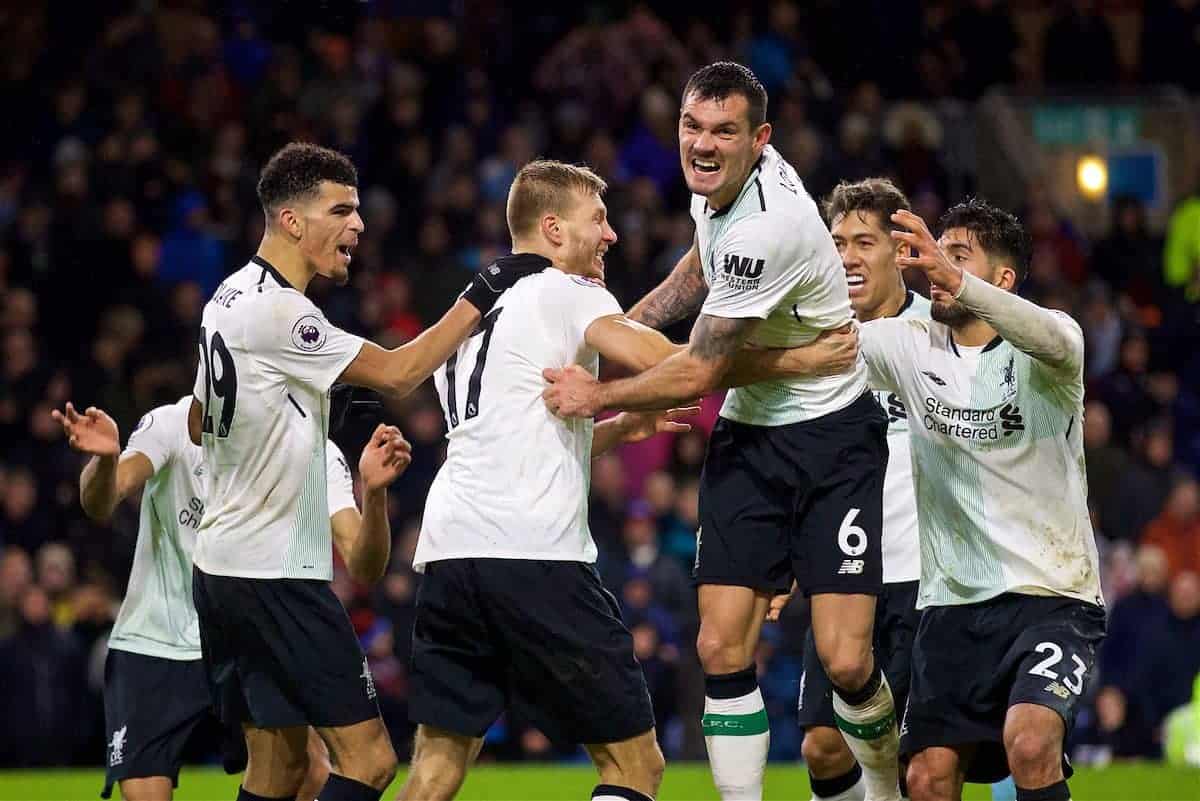 A late winner sent Liverpool fans into raptures as Jurgen Klopp‘s side sealed a hard-earned three points with 2-1 victory away to Burnley.

Generally untroubled but did his goalkeeping duties well enough.

Gives possession away too often with his long kicking.

Made an easy save from Scott Arfield and collected a tame cross in the first half.

Saved well from Steven Defour in the second, getting down low at his near post to stop his compatriot’s shot.

An early error on the ball let Burnley in. Was relied upon to provide the width from full back in attack and though he couldn’t get much going in the first half, he was better in the second.

It was his cross which led to Mane’s goal, and while it can’t be described as a pin-point delivery, it was dangerous enough and into the right area.

He then showed more of his attacking prowess with a well hit shot which moved in the air and forced a good save from Nick Pope.

Had another careless moment on the ball in the second period, but it was a decent performance form the teenager.

A towering header led to the winning goal late in the game, as he and his centre-back partner combined to claim all three points for Liverpool.

Won several aerial duels throughout, but lost a key one against Ashley Barnes which set up a chance for Arfield.

Gave away a couple of fouls as he battled with the Burnley centre-forward.

Good tackle on Arfield in the second half having just given the ball away, and another good challenge on the same player later in the game.

A dramatic late winner from the Estonian was the icing on a good display.

Managed to get an important touch on a cross late in the second half, diverting the ball wide when it would have been easy to score an own goal.

Made some good passes forward but was caught out by the run and header from Sam Vokes which led to the equaliser.

Made up for it shortly after by making sure Lovren’s header found the back of the net rather than being cleared off the line.

Looks like he could play for Burnley, which is a compliment given Sean Dyche’s side’s defensive record this season, which is the fourth-best in the league.

Asked to do a job at left-back for the first time under Klopp, and was solid enough without providing much of an attacking threat.

Might have been more on his toes for the late equaliser, when Gudmundsson stole in at the far post.

Other than the late lapse it was another good display from a player who looks like he can comfortably play anywhere across the back at the top level. Heavily involved in the build up play. Controlled the game in attack, and intervened well in defence.

Made a total of six tackles throughout the game and was central to everything his side did despite his pass accuracy dropping off in the second period as the home side started to force the issue.

Stormed forward late in the game to win the free kick which resulted in the winning goal.

Involved nowhere near as much as his midfield partner, with fewer than half as many touches of the ball as the German, and also fewer than Mignolet.

Headed over from Lallana’s cross in the second half, and should have done better when played in by Can late in the game.

Did nothing, then did everything.

After an anonymous first half and a fairly wasteful start to the second, he sprang up out of nowhere to give Liverpool the lead.

Having moved from the right into a central position, he took the ball off Oxlade-Chamberlain’s feet and blasted into the top corner with his left foot.

It was the something out of nothing Liverpool needed against this stubborn opposition.

Controlled the ball well in the opposition half, but didn’t do much with it.

Made a vital tackle on Gudmundsson to stop a dangerous Burnley break. Had he mistimed it he and his team would have been in trouble.

Not accurate enough with his final pass or shot, even though he looks good on the ball.

Looked like the player most likely to produce chances in attack, but wasn’t involved as he might have liked on the left wing, especially in the opening period.

Made a good pass out to Alexander-Arnold in the build-up to the goal, and almost got on the end of the cross, but Mane had other ideas.

Stung Pope’s hands with a near post shot late in the game, and provided a good outlet for the defence to clear too.

Held the ball up well, showing good strength against the Burnley defenders, but wasn’t clinical enough when presented with a good chance in the first half.

Needs a goal and didn’t seem to have the quality in the box to get it. Roberto Firmino (on for Mane, 72′) – 6 — Worked hard, linked play a few times but not heavily involved in dangerous areas.

The manager changed more than half his team from the Leicester victory just two days ago, in a move which shows trust in his squad.

Either that or he’s learned from last season when he failed to rotate his side at this time of the season, and the lack of rotation then was blamed for a poor result against Sunderland, and a subsequent dip in form at the start of 2017.

His side were unable to break down the Burnley defence in the first half, but moving Mane into a central position in the second period worked wonders, and allowed Mane to get in the position to do the damage.

Late changes disrupted the side’s defensive organisation, but they needed to be made.