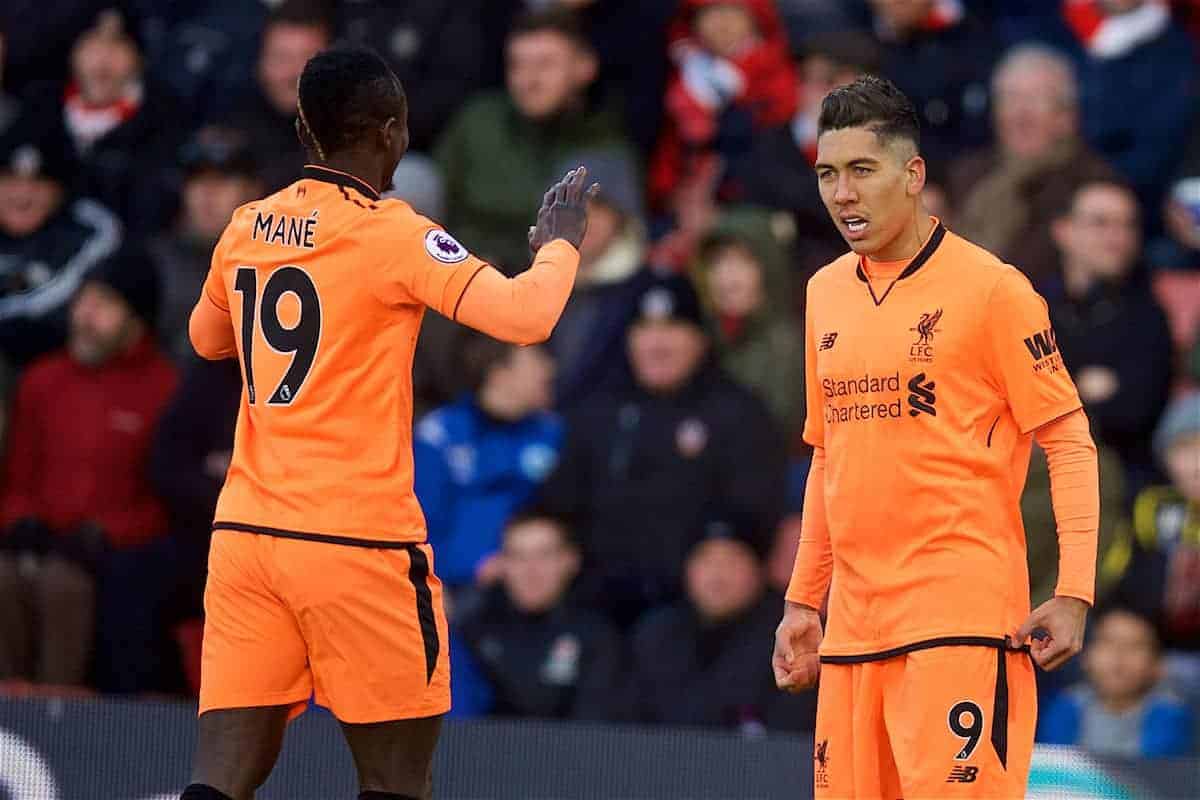 Liverpool and their clutch of ex-Saints players picked up a 2-0 win over Southampton in the Premier League on Sunday. Here’s our five talking points.

A 20-goal a season striker

Everyone wants a No. 9 who can rattle the goals in with regularity, with the magic 20-goal mark heralded as a gold standard.

Liverpool have one: Roberto Firmino.

The Brazilian notched his 12th in the Premier League and 20th across all competitions with his unerring first-time finish early on at St. Mary’s, the first wearer of the red nine shirt to hit that mark since Fernando Torres in 2009/10.

But he’s also the complete forward, not just a poacher: his scintillating backheel for Mohamed Salah was his 11th assist of the season, too.

That strike took the Egyptian to 29 for the season in all competitions—just one shy of 50 between them.

Salah and Firmino are the Premier League‘s best attacking pairing, with the goal return and combination play to prove it.

Centre-back spot still up for grabs

Virgil van Dijk is the first-choice central defender for Liverpool without question, but his regular partner is still up for debate. Dejan Lovren has impressed to an extent alongside the Dutchman, but Joel Matip was back in place at St. Mary’s.

While he had one or two moments which were positive — notably the line-breaking pass in the lead up to the Reds’ second goal — his defensive work was less than stellar.

Misplaced passes, missed headers and a lack of general decisiveness mean the Cameroonian surely can’t be seen as the preferred second in command at this stage.

Looking ahead to summer, it’s entirely plausible that the Reds will be back in the market for yet another defender, one to parter Van Dijk on a more regular basis, unless Lovren can come up with far more consistency than he has managed thus far. He won’t fully win over the entire fanbase until he shows the ability to put in top performances week in, week out, but Loris Karius certainly took another step forward on Sunday.

The German goalkeeper had an almost completely quiet second half—just one notable punch clear under pressure—but he had already played his part in the win.

At 1-0 he made a fine one-vs-one block and his aerial handling was immaculate, with Saints looking at that stage the more threatening team—right before Salah made it 2-0.

Karius is looking more commanding and in control of his game, more confident with his decision-making and more settled as the No. 1.

It’s probably not a surprise, and clarity is what has been needed in the position all season long—now he needs consistency to remain there beyond the summer.

Seeing out the win

In direct contrast to many previous matches, Liverpool never once looked like throwing away the points at St. Mary’s.

From Burnley to Manchester City and others besides, the Reds have come out with three points despite what at times seemed like a best attempt to throw at least two away.

Other games, such as Spurs last week, turned out even more frustrating due to an inability to see games out entirely without conceding.

Southampton, however, were snuffed out completely.

Calm in possession, organised off the ball and first to every loose pass, the Reds looked much more assured in the second half and fully deserved the end scoreline.

Indeed, but for some profligacy at the other end, it could have been a much more dominant result.

Van Dijk and Karius in particular might take pleasure and plaudits for the low-key ending, but it was a non-event of an ending that all Liverpool fans should be happy about.

It’s back to the Champions League next for Liverpool with the first leg against FC Porto on Wednesday.

Jurgen Klopp changed two-thirds of his midfield for this fixture and is likely to again change half his back line for the European clash.

Rotation has been consistent, players are largely fresh and one or two such as Adam Lallana and Alberto Moreno are returning from injury.

The blip of back-to-back defeats against Swansea and West Brom look behind Liverpool now, so there should be nothing but positivity as they look forward to extending their season and continental adventure.