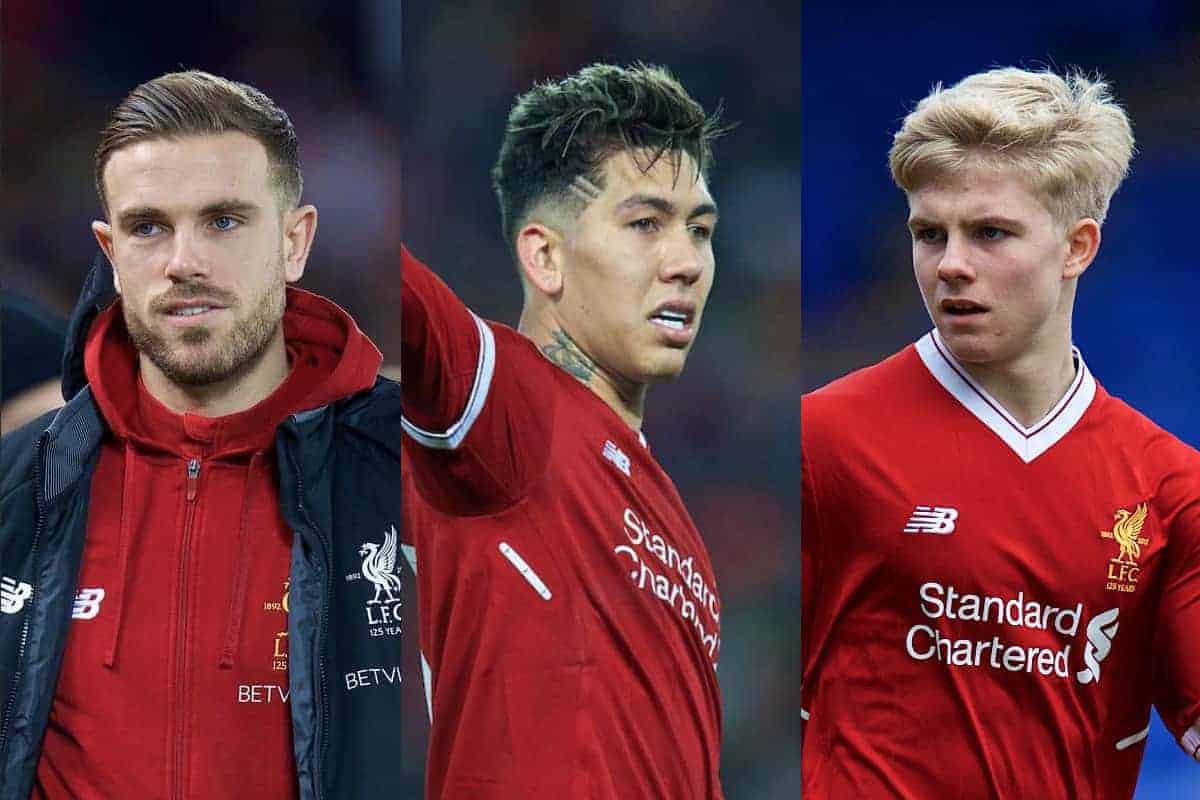 We bring you the latest Liverpool FC news and rumours on Monday, following the 4-1 win over West Ham on Saturday afternoon.

The Reds were superb at Anfield last weekend, dispatching of the Hammers in style thanks to goals from Emre Can, Mohamed Salah, Roberto Firmino and Sadio Mane.

Attention now turns to the visit of Newcastle United this Saturday, with Jurgen Klopp given all week to prepare at Melwood with his squad.

There was some surprise when Jordan Henderson was left out of the starting lineup against West Ham, given Klopp’s fondness towards the captain.

The manager has revealed that the 27-year-old was not 100 percent, though, hence his omission on the day, with Can’s risk of suspension also a reason.

“Hendo has a little issue, really not a lot, and Emre [Can] has [eight] yellow cards,” Klopp told LiverpoolFC.com.

“If he got a yellow card then Hendo plays the next two games. I tried to deal with it a little bit.

“Hendo is in outstanding shape as well. He had a few days off in the break, he couldn’t train constantly because of different things but it is all good. He should usually play.”

It’s heartening to be in a position where the likes of Henderson, Gini Wijnaldum and Adam Lallana are all on the bench and Liverpool are still able to win 4-1.

The weekend victory saw Firmino produce another footballing masterclass, leading the line in his own unique style.

His influence on this Liverpool side is vast—perhaps greater than any other current player—and ensuring he signs a new-and-improved deal at Anfield is of the utmost importance.

The Mail‘s Dominic King is hopeful that this will be the case, saying: “Liverpool are in negotiations to give him a bumper new contract and it is business they should wrap up swiftly.”

This is only King’s opinion, at the end of the day, but one that is spot on.

The Reds must reach a stage where they are no longer consistently selling their best players, and in Firmino they have someone who can guide the team towards great things.

It was another productive weekend for exciting Liverpool youngster Taiwo Awoniyi, who scored in Royal Excel Mouscron’s eventual 5-3 defeat to Lazar Markovic‘s Anderlecht.

The 20-year-old has been a real success story in Belgium, scoring eight goals and registering six assists in 28 appearances.

He says a potential agreement to extend his current stay would appeal, as he looks to continue his development.

“That’ll get sorted between the two clubs and myself when the time comes,” Awoniti told Le Soir.

“But it’s clear that Mouscron are giving me an opportunity to play a lot, which is essential for my development.”

This is a move that would make complete sense, with the Nigerian still awaiting a work permit that will allow him to play in England.

Liverpool’s fantastic 5-0 win over Porto is still fresh in the memory, on a night when Mane returned to form with a brilliant hat-trick.

The Senegalese’s third of the evening was a 20-yard strike that flew into the net, effectively putting the tie to bed before next Tuesday’s second leg at Anfield.

Mane has been rewarded for his efforts at Estadio do Dragao, with the 25-year-old’s strike voted the Champions League Goal of the Week.

Let’s hope for more of the same in the quarter-finals, unless Liverpool inexplicably fail to reach them at Anfield in eight days’ time. Edvard Tagseth is one of the most exciting youngsters at Liverpool, with the 17-year-old earning praise from U18s boss Steven Gerrard earlier in the season.

Unfortunately, the influential Norwegian’s campaign looks to have come to an end, after it was revealed he has picked up a stress response injury in his left leg.

“The season is over,” Tagseth told the Norwegian Liverpool Official Supporters Club.

“I will not be back in normal football training again before May 15. It’s not a stress fracture, but the degree below it.

“I have to admit that it feels a bit heavy now. There will be a lot of strength training to improve the core muscles until May.

“It’s important that I do not start to hang my head because of this. I’m aiming to get stronger back next season.”

Tagseth has missed only two league games for Gerrard’s U18s this season, so this is a real setback for both the player and the young Reds in their quest for league glory.