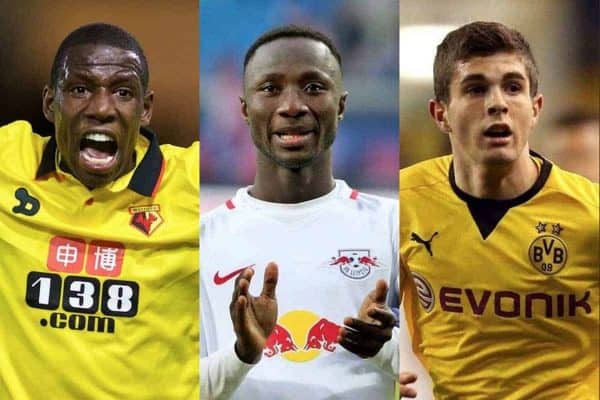 We round up the latest Liverpool FC news and rumours on Tuesday, with a potential midfield addition claiming interest from Jurgen Klopp‘s side.

One of the key areas Klopp will need to address in the summer transfer window is his midfield, with Emre Can poised to follow Philippe Coutinho through the exit.

Though Naby Keita is already in line for a move to Merseyside in July, the addition of at least one more option in the middle of the park is necessary.

The Reds have been linked with a host of potential Can replacements in recent weeks, and now Watford‘s Abdoulaye Doucoure has claimed he is among Klopp’s targets.

“It’s true that these clubs are interested,” he told French outlet Telefoot when asked about links with Liverpool, Arsenal and Tottenham.

“But I’m at Watford for the moment and I want to finish my season well.”

Soon-to-be Liverpool midfielder Keita made the headlines on Monday night for his involvement in a 22-man brawl during RB Leipzig’s 2-1 defeat away to Eintracht Frankfurt.

But more concerning was how the 23-year-old was forced off the field just after the hour mark at the Commerzbank-Arena with a suspected hamstring injury.

There is no indication at this stage as to whether the injury is serious, but any absence could be a blow for the Reds.

Keita has been in mixed form for Leipzig this term, scoring seven goals and assisting two in 26 games in all competitions, picking up two red cards in the process.

Nevertheless Klopp will be hoping he makes the move to Merseyside fully fit, ahead of a swift transition into a key role.

Liverpool have been touted with a renewed bid to sign Borussia Dortmund forward Christian Pulisic in the wake of Coutinho’s departure.

If they do, however, they are likely to face serious competition for his signature, with Chelsea and Bayern Munich the latest two sides linked with the teenager.

The Mail cite previous reports from German outlet Sport1 in claiming both the Reds’ domestic and European rivals could sign Pulisic for around £88 million.

This would be a hefty fee for the United States international, but given the inflation in the current market it may be worth it for a player of his ability and potential.

According to Sky Sports‘ La Liga expert Guillem Balague, Klopp has been mentioned by Real Madrid as a potential successor for Zinedine Zidane.

But Balague claims that Klopp won’t be going anywhere, with Rafael Honigstein’s Bring the Noise highlighting the German’s intention to stay at Liverpool for a seven-year spell.

“Klopp has even been mentioned,” he said, also suggesting Mauricio Pochettino and Joachim Lowe could be targets.

“Klopp will stay at Liverpool though because he’s somebody that wants to stay for seven years at Anfield as we read in the Raphael Honigstein book.

“That means Real will have to look elsewhere.”

Liverpool are continuing to bolster their academy ranks despite their current ban on signing youth players from English clubs.

Left-back pair Tony Gallacher and Anderson Arroyo joined from Falkirk and Fortaleza C.E.I.F. respectively in January, with the Reds casting their net wide for further talent.

Now, according to France Football, Liverpool are interested in signing Lyon midfielder Mohamed Bahlouli, who is “tempted by the prospect.”

Bahlouli is the 17-year-old brother of Lille’s Fares Bahlouli, and speaking to Goal last month he expressed his desire to emulate Coutinho.

“He has everything a modern attacking midfielder needs,” he explained.

“He is capable expressing himself by dribbling, scoring or setting up other, all the time positioning himself to keep his team balanced.”

The 18-year-old has only played two games for the Reds at any age level so far this year, but was an ever-present for Steven Gerrard’s side throughout the group stage.

He is likely to start at Prenton Park, with the game kicking off at 3pm (GMT).

* If you wish to attend the game, admission is free for season-ticket holders and Members who show their cards. Alternatively, tickets are priced at £3 for adults and £1 for children on the gate.