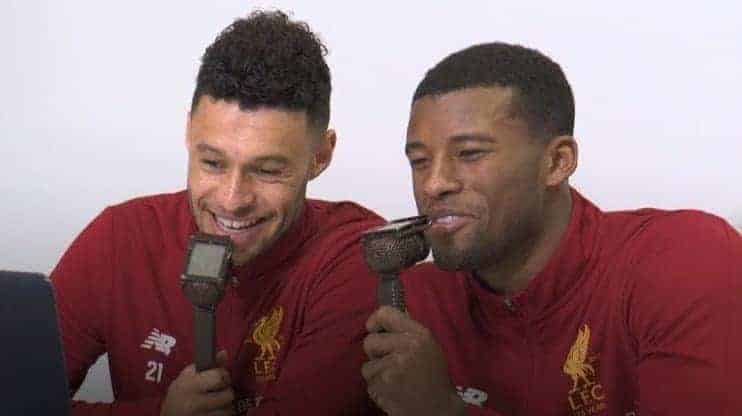 Alex Oxlade-Chamberlain and Gini Wijnaldum may be respected for their footballing skills, but what about their ability in the commentary box?

The midfield pair have been important squad members for Liverpool this season, helping Jurgen Klopp‘s side rise to third in the Premier League and all but reach the Champions League quarter-finals.

The life of a footballer is intense, for all the many benefits it brings in life, and occasionally, some downtime is vital.

Oxlade-Chamberlain and Wijnaldum have done just that in an entertaining new video released on the club’s official YouTube channel.

The Liverpool duo have had a go at commentating on the Reds’ 4-1 win at West Ham back in November, prior to the Hammers’ trip to Anfield this weekend.

Oxlade-Chamberlain was handed his first league start for his new club at the London Stadium, and he made sure he brought it up.

“He’s been waiting for about five years for this start, so he does look excited,” he joked.

The Englishman and the Dutchman go on to discuss the tactics used by Klopp on the night, with the 4-4-2 formation “new from Jurgen.”

Mohamed Salah fires Liverpool into a 1-0 lead after a sensational counter-attack involving Sadio Mane, leading Oxlade-Chamberlain to shout, “the road runners are off.”

After Joel Matip and Manuel Lanzini exchanged goals, the stage was set for the ex-Arsenal man to make it 3-1 and score his first goal for Liverpool, allowing him to do his best impression of a Spanish commentator in the process.

It is always refreshing to see players letting their hair down rather than only giving robotic interviews, and both individuals come across well in the video.

Klopp is so insistent on a great spirit, with everyone pulling the same direction, and there is a genuine warmth between Oxlade-Chamberlain and Wijnaldum.

Don’t give up the day job though, lads!