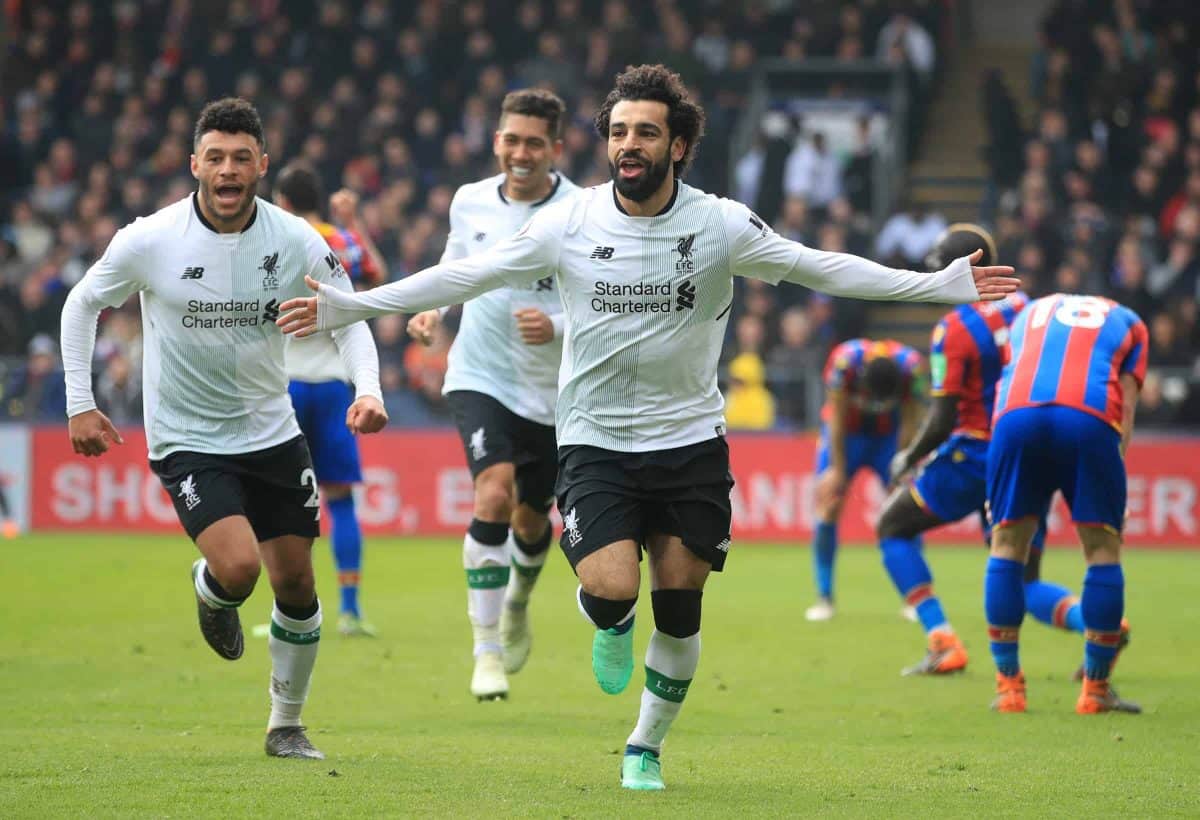 Mohamed Salah struck a late winner to seal a 2-1 victory and Liverpool’s first Premier League double over Crystal Palace since 1997/98.

Jurgen Klopp saw 16 of his senior players embark on international duty after the 5-0 win over Watford, and with a skeleton squad remaining the German opted against a warm-weather training camp.

Instead, preparations for Saturday’s trip to Selhurst Park kicked off at the beginning of the week, with his internationals filtering back depending on their schedules.

This could have served as a setback for the Reds, but despite a clutch of injuries Klopp was still able to name a formidable side against Palace, making two changes from March 17.

Looking to cement their place above Tottenham in the table, the pressure was on Liverpool to take three points from former manager Roy Hodgson, and after toiling they were able to do so.

Having last worn their white away kit in the 2-1 loss at Man United, Liverpool were almost cut open in similar fashion in the opening stages, but Loris Karius was on hand to deny Wilfried Zaha after he had eluded Trent Alexander-Arnold.

The 19-year-old was exploited again minutes later, and this time Karius wiped out the onrushing Zaha, with Luka Milivojevic stepping up to convert the resulting penalty.

With their passing sloppy and Palace’s defence sitting deep, the Reds grew increasingly desperate as the first half wore on, with Sadio Mane booked for a dramatic fall in the penalty area.

Mane then had the ball in the back of the net on the half-hour mark, but the winger was ruled out for offside to pour further misery on his afternoon.

Both Mane and Salah tested Wayne Hennessey in the closing minutes of the first half, but the Wales stopper denied the duo to round off a frustrating 45 minutes in Croydon.

Klopp sent his side out early during the break, and they flew out of the traps as a result, and it was Mane who levelled the scores on 48 minutes following James Milner‘s great play out wide.

The Senegalese’s bizarre afternoon continued as, believing he had been fouled in a tangle with James McArthur, he picked the ball up only for it deemed to be a deliberate handball, conceding a dangerous free-kick.

Unsurprisingly, Klopp made the decision to bring Mane off soon after, introducing both Adam Lallana and Alex Oxlade-Chamberlain as the anonymous Georginio Wijnaldum also made way.

Lallana lasted just three minutes, however, before limping off with yet another injury as Klopp sent on Dejan Lovren to prompt a change in system.

This ultimately paid off, as the Reds’ added width allowed Oxlade-Chamberlain to cross for Andrew Robertson, whose resulting pass was touched down and drilled home by Salah to seal a 2-1 win.