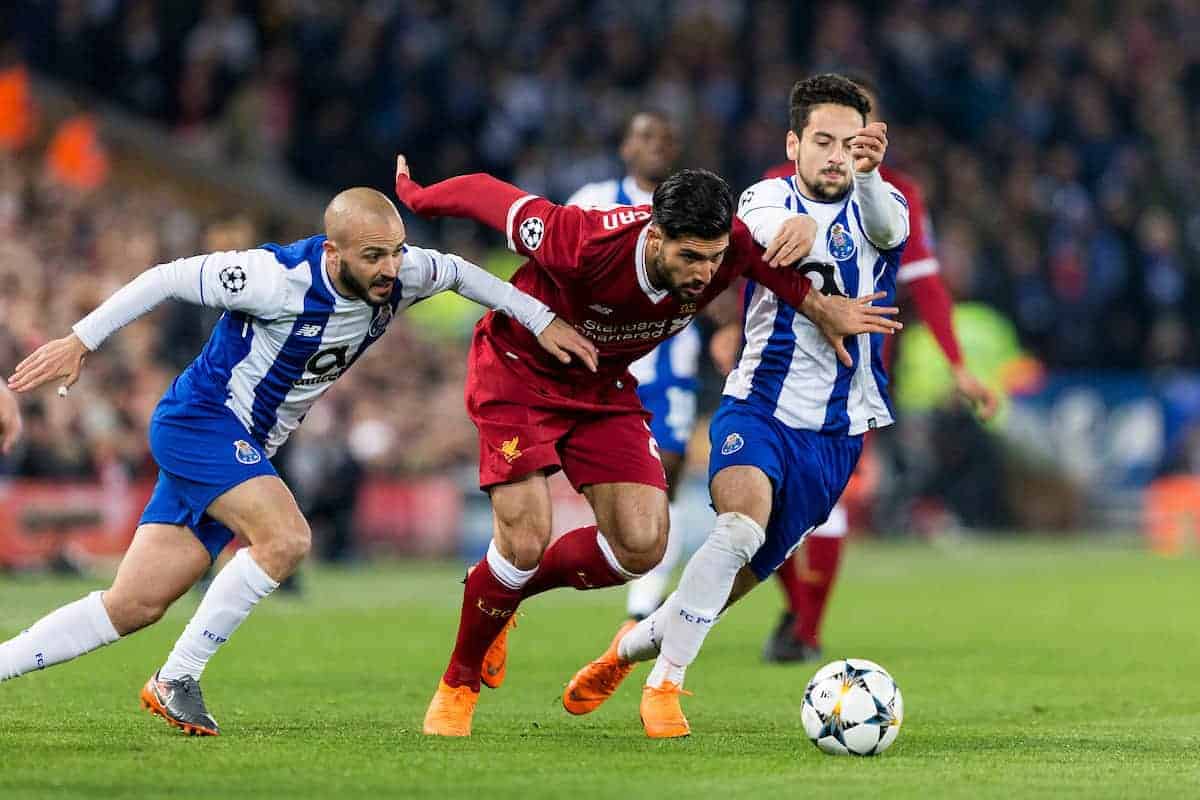 Liverpool are through to the quarter-finals of the Champions League after sealing a 5-0 aggregate win over last-16 opponents Porto.

After their 5-0 demolition job of Porto at the Estadio do Dragao in February, the Reds took to Anfield looking to finish the job professionally.

With Saturday bringing a crucial top-four clash with Man United at Old Trafford, Jurgen Klopp made five changes to his starting lineup, still hoping to keep up the momentum for the weekend.

Top scorer Mohamed Salah was among those rested, but both Sadio Mane and Roberto Firmino started in a strong side.

Porto themselves made 10 changes from the first leg, with their focus turning to success on the domestic stage, and it told on a quiet night at Anfield. Few will have expected a breakneck start to the clash, and there was certainly less urgency on show in the early minutes, with Liverpool’s first effort on goal coming from Mane on 18 minutes.

Mane and Firmino operated at a decidedly slower tempo than in previous outings, but the pair still combined to create promising openings, with Mane lofting in a cross for the No. 9, who was unable to get his shot off.

The Senegalese then saw an effort cannon back off the post on the half-hour mark, after excellent work from Alberto Moreno and James Milner in the buildup.

Milner, the Champions League‘s leading assist-maker this season, was clearly eager to add to his tally, and his curling free-kick was headed just over by Dejan Lovren.

The Reds were certainly the more dominant of the two sides in the first half, with three shots to one and 65.5 percent of possession, but the whistle blew with the scores on the night even.

After spending much of the first half looking to create opportunities for his team-mates, Milner almost broke the deadlock shortly after the break, but the veteran was unable to convert Adam Lallana‘s cutback.

It was Porto who hit the first shot on target of the night, with Majeed Waris drawing a save from Loris Karius after some excellent work driving towards the penalty area.

Firmino then almost found himself one-on-one with Iker Casillas at the other end, but Porto centre-back Felipe made an excellent recovery to deny the Brazilian.

That proved to be Firmino’s last contribution, as Klopp opted to withdraw his first-choice striker and provide Danny Ings with some much-needed game time in an encounter swiftly fizzling out.

Klopp then made the interesting decision to send on Salah, with the Egyptian playing out the final stages of a drab draw that sees Liverpool through to the quarter-finals for the first time since 2009.